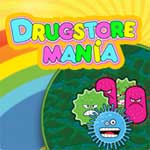 GFI brings us yet another Cake Mania reincarnation with Drugstore Mania, a time management game that has you running around a pharmacy filling prescriptions for moon-eyed, cartoonish customers who honestly look like they don’t need any more drugs.  With tons of flowers and strange giggling, Drugstore Mania will have you wondering if you took something before you started playing the game.

Following in the footsteps of previous "mania"-style games, Drugstore Mania has you playing the role of Lisa, a recently graduate with her pharmacist’s degree who’s looking for her first job. Lisa hopes to one day work in a big city pharmacy, but until then she must work her way up through several small city pharmacies starting in Lakeside City.

Once you get into your first day with Lisa, the game introduces you to a tutorial that explains how to serve the customers. As each customer comes in, they have a meter above their head with a row of hearts to show their morale, and also a line of symbols that match the medicines in your store to indicate what they want to order. All you have to do is click on the matching medicines behind your counter and then click on your customer to bring the medicines to them. The game allows you to carry two medicines at a time and in any order you like, so you don’t have to follow the sequence above the customer’s head. If you bring the medicines before the customer’s morale drops, you gain a big tip which will go towards your level’s goal.

Each level has both a finishing goal and an expert goal, which you can complete by earning money from filling your customer’s orders in a timely manner. You only have so much time to complete the goal on each level, which you can see by a clock at the bottom of the screen. You’ll know when you complete the first goal though by the change to happier music in the level. Levels will increase in difficulty with larger goals, bigger customer orders and more customers as you move through different cities but this increase is slow.

The game will add on new elements in the game as you move through the different cities. You have to start making special prescriptions for customers by mixing two medicines together at a mixing station as well as bring a special prescription book to customers that will take a while to regenerate. Between levels, you’ll have a chance to buy add-ons for your store like a candy machine or chairs that will make your customers happy while they wait, or flowers to spruce up the look of the store.

There’s even a mini-game to play before you move onto each new city that has Lisa volunteering to help with experimental research. You must use an eye drop to click on one of three coloured medicines and then drop it on the matching microbe to remove it from the Petri dish. You have to remove as many as you can within the set time limit to earn money for your store.

Drugstore Mania is somewhat fun and easy to play, but after the first hour the game failed to add anything new and exciting into the mix. I found that most levels weren’t very challenging and that I was not only meeting expert goals but exceeding them more often than not.

The grammar in this game was terrible, with misspelled words like “owest” instead of “lowest,” and the tutorial in the game failed to show you half of the information that the help menu explains to you. During gameplay, the customers would make this strange giggling noise that was so out of place and creepy that I had to finally turn the sound off.  The anime-style graphics were probably the strangest part of the game though, with its big eyed, big head doll characters coming into your store. Something about characters with giant glazed eyes buying drugs in such a rainbow coloured game in it that just seems wrong.

I also found that for some reason that when you retrieved your money from the customers, clicking on the cash register didn’t always work. You would sometimes have to click again to put the money away. The game did have a neat little trophy system that awarded you when you reached certain goals like 100 visitors served or 10 expert goals completed.

While generally I am a huge fan of games like Cake Mania or Nanny Mania, Drugstore Mania just happened to be another one of those failed wanna-be games that someone threw together and slapped a “mania” title on in hopes of cashing in on the name. While the basic game play is the same as previous mania games, the overall presentation fails on so many levels that I can’t even recommend that any one try even the free 60 minute trial.

Cleopatra: Riddle of the Tomb Review