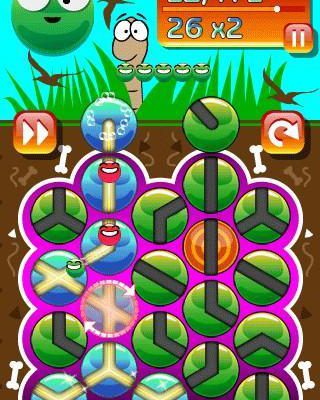 Is it possible for a game to be too cute? If so, Droplitz Delight treads dangerously close to the line. It’s bright, colorful, and features a soundtrack where smiling dots sing along. It’s almost too much. But it’s also a much more welcoming game when compared to the original Droplitz, combining a sugar sweet presentation with a fresh and addictive puzzle mechanic.

The concept is the same as the in the original game: tiny dots — the titular droplitz — fall from the top of the screen, and it’s your job to guide them safely to the bottom. To do this you’ll have to rotate the various tiles on screen in order to create a path that connects the droplitz from the top of the screen to one of the exits on the bottom. Once you create a successful path, all of the tiles used disappear and are replaced by new ones. You can create combos by linking multiple paths together, racking up ever increasing high scores. 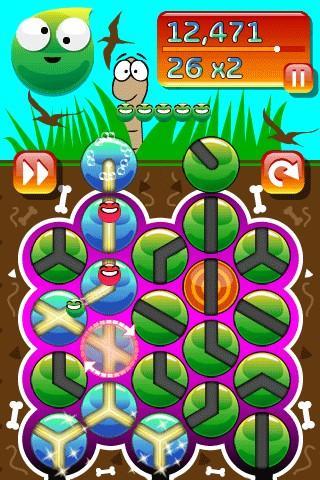 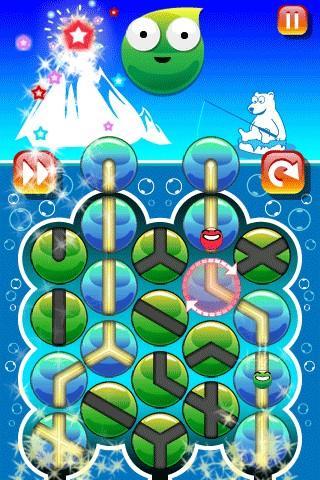 Like all great puzzle games, Droplitz is easy to understand but difficult to master. On the easier difficulty levels things are slow paced, allowing you to methodically create paths. But as the difficulty ramps up you’ll be dealing with more droplitz that come at you at a much faster rate, creating increasingly hectic scenarios. There are four different game modes to help ensure that you’re not just doing the same thing over and over again. The Free Play mode serves as excellent practice, letting you play at your own pace without having to worry about high scores or failure. The Classic mode, meanwhile, plays just like in the original, letting you play until you run out of droplitz, with the goal of getting as high of a score as possible.

Taking a cue from PopCap, there’s also a Dash mode that tasks you with scoring as many points as possible all in one minute. This mode is a perfect fit for the platform, letting you get in quick doses of puzzling fun even if you don’t have much time to play. Rounding out the game modes is Target Quest. This is the only mode that has you going through multiple levels. In it, the goal is to create paths using tiles that are labelled as targets. Once you successfully do that, you’ll move on to the next level. The difficulty curve is gradual and this is definitely the mode you’ll want to play for extended periods of time.

To go along with the new more approachable gameplay in Droplitz Delight, the game also looks much more inviting. Gone are the cold, mechanical looking visuals from the first game, as they’re replaced by brightly colored cartoon graphics. The little droplitz are always smiling and the backgrounds consist of fluffy clouds and beautiful rainbows. The soundtrack, likewise, is happy and bouncy, and occasionally the droplitz with even chime in with their own “la, la, la’s.”

If the first Droplitz was a bit too difficult, or if you missed out on it entirely, Delight is a great entry point. The difficulty has been turned down and the cuteness way up and there’s even a few new game modes. It may not be enough to entice fans of the original to re-buy, but if you’re new to the series, Droplitz Delight is a charming, addictive, and surprisingly original puzzle experience.