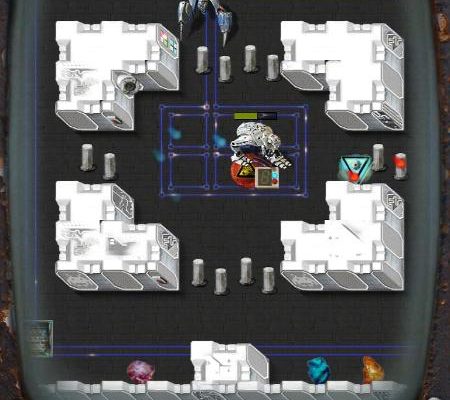 A clever action-puzzler that excels even without its motion-control gimmick.

The year is 4057.  For centuries, three different powers have been vying for majority control of the galaxy: the religious Ecclesiarchy, the Cortez Corporation, and the time-manipulating Guild of TAL.  In an aggressive push to expand their reach, Cortez Corp has taken over the TAL’s primary base of operations, the space station Basilica.  The sole remaining guild member aboard, Aetherion, is imprisoned and awaiting execution.  His only hope for rescue is a remote-controlled droid named Bishop 7, who must be guided through the dangerous and labyrinthine space station in Droidscape: Basilica.

Bishop 7 is brought to “life” in the manufacturing bowels of Basilica and must make his way to the guild headquarters where Aetherion is being held.  As a highly mobile, non-combat droid, Bishop’s primary goal is to reach the exit of each room while avoiding any patrolling enemy robots in his path.  Every stage comprises a single room and plays out as a perfect combination of puzzle-planning and platformer-execution. 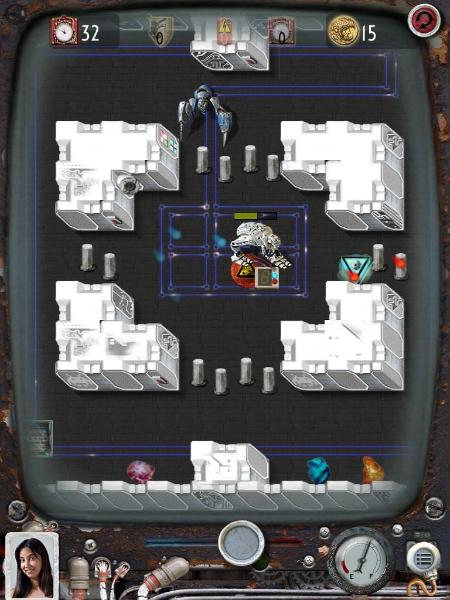 These two distinct gameplay elements take place in their own allotted portion of each stage in Droidscape: Basilica.  When a level begins, Bishop will be in Draw mode.  This is the planning stage: enemies are not moving, time is not tracked, and you are free to move Bishop anywhere.  Dragging him in any direction will plot that movement as part of his path, denoted by a series of blue dots.  If Bishop touches an interactive, non-enemy object, it will be confirmed as activated to ensure you’ve plotted him close enough.  Once a complete path has been drawn from Bishop’s starting point to the yellow exit door, Play mode can begin.

Play mode is where the action actually takes place.  Bishop will move along the pre-planned route from Draw mode, now displayed as red dots that fade to blue once completed.  He only moves when you actually direct him to do so, by dragging the movement slider to the right for forward progress, or to the left to backtrack on his assigned route.  Like a train throttle, Bishop moves fastest when the slider is pushed all the way in one direction, and creeps along slowly if you barely touch the knob.

Bishop’s actions matter in Play mode, as enemies are alive and moving, the 60-second timer is counting down, and his energy is draining with every step.  Although you’ve already plotted Bishop’s route past patrolling sawblade mice and hover-bees, you’ll still need to time your movements carefully.  What seemed like the best route past an enemy in Draw mode might require slick maneuvering in Play when the robot’s route leaves him directly in Bishop’s path.

The most engaging aspect of Droidscape: Basilica‘s dual-part stages is that you have to fully commit to a plan.  You cannot undo Bishop’s path once you’ve left Draw mode without starting over and redrawing it from scratch.  This means you’ll have to decide ahead of time whether to break off for a few points-awarding gemstones, or stay the course and focus on collecting keycards and unlocking doors to the exit.  As stages become more intricate and introduce new challenges, like Bishop-seeking scorpion bots and single-use trap floors, every potential death-dealer must be considered before sending Bishop off on a gem-seeking joyride. 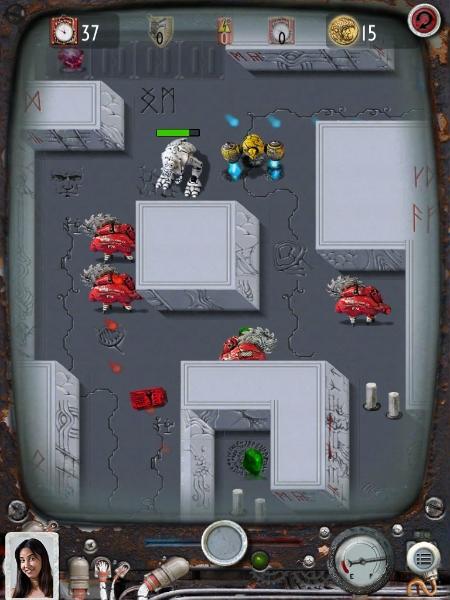 Once Bishop does make it to an exit, the stage is graded on three different areas of success: the distance traveled, gemstones collected, and time used.  Each stage has a separate standard for silver or gold achievement, but this is mostly a vanity award; the game does not track whether you’ve “golded” a level or not.  Gemstones, however, do come in handy, converting to in-game currency that can be used to buy power-ups.  The three power-ups available offer a shield against an enemy encounter, an energy refill, or extra time on the clock, and are one-time uses that activate automatically when needed.

In most cases, however, these power-ups are not necessary.  I completed Droidscape: Basilica‘s current 60 levels without using any power-ups, encountering only a few stages where I died enough times to be prodded for a 500-coin auto-complete.  While its initial gameplay is puzzle-based, most rooms have fairly obvious paths to completion.  This leaves the greatest challenge in successfully maneuvering Bishop 7 through that path.

To that end, you have two options: the touch-based throttle control discussed previously, and Droidscape: Basilica‘s unique “HeadTwister” option.  The latter choice lets you use your head to move Bishop during Play mode by turning to the right for forward momentum and the left for reverse.  The farther you turn your head, the faster Bishop will move…in theory.  In practice, “HeadTwister” rarely recognizes your movements and makes the highly delicate Play mode nearly impossible to complete gracefully.  Thankfully, Droidscape‘s standard controls are smooth as silk and the “HeadTwister” can be checked off as a unique, completely optional idea that doesn’t really add to or detract from the experience. 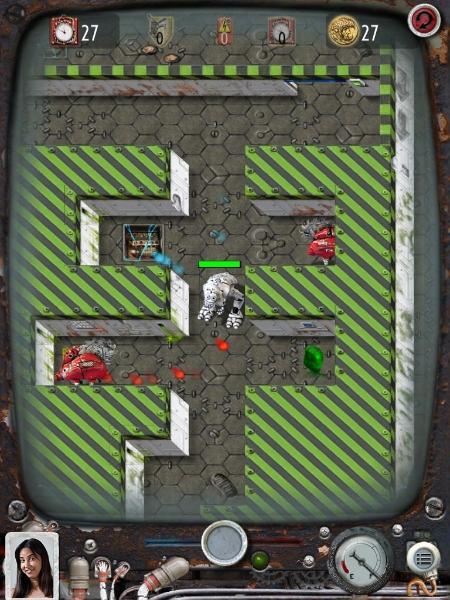 What does detract, however, are the limitations of Draw mode.  While the use of Draw mode to define and execute Play mode is an ingenious way to add challenge to the game, a number of issues hold it back.  If you draw a path over an item to activate it but then undo that path—you decide to head a different direction—the item remains active.  This is a minor inconvenience with gems and cardkeys, and a mode-breaking problem with trap floors, which cannot be passed over once active, forcing a complete redraw if you opt to undo even part of your path.  At the same time, items that appear active in Draw mode will not always be activated in Play mode.  I frequently encountered an issue where I had positioned Bishop near an energy station in Draw mode—it refills his energy to confirm that he’s activated it—yet in Play mode he did not step close enough to activate it.  With longer rooms that require multiple energy refills, missing a single station can easily cause death, resulting in a complete restart from Draw mode to ensure Bishop is well past the point of activation.

These issues are theoretically fixable, though, and don’t prevent completion of the game—merely a delay as you are forced to restart and redraw.  Players who take the time to push onward in Droidscape will be treated to a generous amount of levels—with 15 more “coming soon”—that vary in focus and difficulty; a story that is surprisingly detailed and fleshed out through gorgeous hand-drawn comics and in-game mythology facts; and charmingly bizarre characters brought to life through claymation sculptures.  Even without its “HeadTwister” technology, Droidscape: Basilica is a unique experience that maintains momentum from its beginning to whenever the actual end comes.