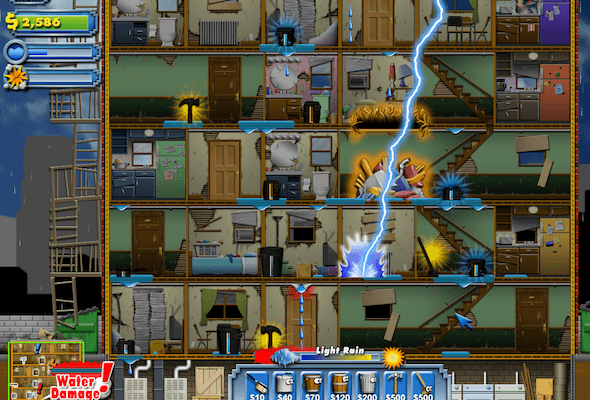 A massive storm is sweeping across the United States, and apparently no home is equipped with a roof capable of keeping out all of that rain. As the leader of a disaster response team, you’ll be called in to save rundown tenements, opulent mansions, office buildings, and more from flooding or collapse due to water damage. With Drip Drip, the game’s unique concept is worth a look, but the end game doesn’t come without its problems.

Drip Drip begins as more of a casual time management game, but quickly gives way to far more complexity and difficulty than should ultimately be present. You’ll make your way from city to city on a world map (with only a couple dozen levels being available in all), with each city containing a single building that needs to be saved. Each level becomes more complex over time, but starts with a set of water droplets that are dripping from the ceiling to the floor of a particular level within the building. You’ll send out saucepans, buckets, barrels, trashcans and more to catch the water, with each having a different movement speed and water capacity.

Each building has multiple floors, but only a limited number of access points through which your tools can enter the building. This means that you’ll spend far too long waiting for the slow moving buckets and trashcans to get to their assigned points, all the while watching water drip through the floor into the basement. If the basement fills past a certain point, the building is considered lost. Furthermore, if you allow water to puddle on a floor above the basement for too long, the floor can collapse from water damage, blocking the floor below with debris (this is also the outcome if you allow your objects to overflow with water, which must be constantly emptied). 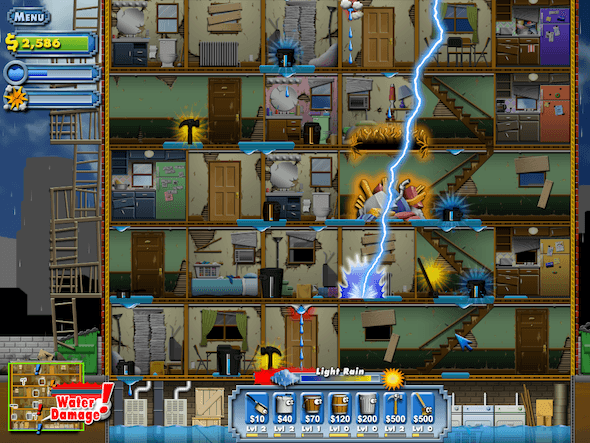 Needless to say, there’s a lot to balance in Drip Drip, even before throwing in multiple randomly occurring obstacles like ghosts, witch doctors, indoor lightning strikes, and UFOs. These mainly try to take your objects away from their designated spots, so you’ll need to stop everything and shift your view to address the situation before that occurs.

There’s a small building map in the corner of the screen that allows for you to rapidly change the camera’s view to another part of the building, but there’s already so much visual stimuli on the screen that it can be difficult to remember it’s there. All of this is added to bursting pipes or holes in the wall that allow water to rapidly flood into a room, creating a final product that becomes far too difficult, far too quickly. 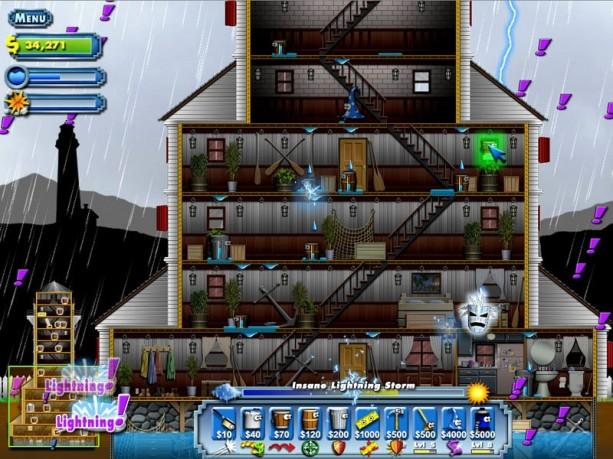 As you repeatedly use specific tools, they earn experience points and will start to move faster or earn an increased holding capacity, but the beginning speed of some of the objects is so slow that these eventual boosts aren’t worth the cost of watching water seep through the floorboards as you wait for a slow-moving trashcan (as an example) to make its way down two or three flights of stairs from the nearest door. Even on the game’s easiest difficulty setting, Drip Drip seems to work too hard against the player, rather than helping them succeed.

Drip Drip, if nothing else, is a unique RTS that deserves credit for trying something new. If you’re looking for a challenging gameplay experience, Drip Drip has that too, mixed with cute personified inanimate objects that stand out against the static backgrounds. Unfortunately, the difficulty curve is a bit too steep, and some of the level designs leave a lot to be desired. If you find yourself with an opportunity to try Drip Drip before you buy it, that might be your best