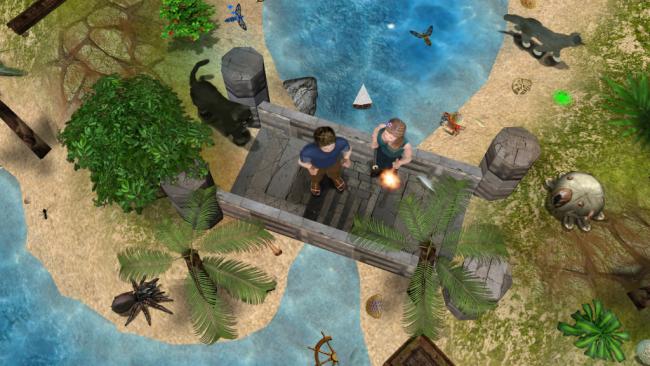 After seven years in development, Driftmoon is finally open to explorers.

The lunar world of Driftmoon is in trouble.  Soon after arriving back in your hometown of Northrop, a band of lizard warriors attack, leaving your friends and neighbors turned to stone and your alchemist father kidnapped.  With few clues to go on, you set out on a journey to rescue your father and find a way to save the petrified townsfolk, not realizing that this adventure will take you around the moon and into the heart of an evil thousands of years old.

Luckily, you won’t have to make this journey alone. Driftmoon is full of charming characters both human and non-human who wish to assist in any way possible.  From Blotch, the pirate snatcher (crab) to the terrifying-yet-helpful Bogeyman, everyone you meet has a story to tell and guidance to give.  As an Adventure RPG, much of Driftmoon‘s focus is on the conversations you’ll have with NPCs, with characters’ emotions and actions explained directly in the text.  Every conversation has multiple trees you can follow to learn more about the story, its characters, and the world itself, whose lore has been comprehensively fleshed out through in-game books and minor details that are slipped into conversations—like the anecdotal fact that units of measurement in Driftmoon are based on “drifts” or “moons,” such as “driftillion.”

This expansive and detailed world feels very familiar, with even its talking animals, undead skeletons, and non-human races (like gorns/goblins) integrated organically.  The lighthearted nature of Driftmoon presents a world where—despite the terrible danger that surrounds the present day—humor takes precedence.  Enemy snatchers charge at you with threats of tickling; a battle with a Black Knight Skeleton recreates a Monty Python sketch; and a fly with dreams of world domination attacks you, is felled in one easy swipe, and leaves behind a “megalomaniac ring” which has humorously detrimental effects on our hero.  These charming encounters result in a world full of interesting and truly likable characters, no matter how minor or potentially villainous they may be.

Of course, the villainous characters must still be fought regardless of their charm.  Driftmoon uses an active battle system reminiscent of classic Ultima titles, in which characters will attack automatically, with attack frequency determined by their dexterity stat.  Special skills can be used at any time as long as you have enough mana, with a range of offensive, defensive, and passive abilities available to learn through the skill tree. Skills and your character build must be carefully considered, as there are a limited number of enemies, level-ups, and thus total skill points available.

Although there are no healing spells, your hero automatically regenerates mana, and will also regenerate health as long as you’re carrying food.  This may sound forgiving, but even on normal difficulty, Driftmoon‘s battles are fairly demanding, with most enemies capable of poisoning you for significant damage.  Luckily, NPC party members cannot die, and health potions and other useful items can be crafted at any time with the right ingredients, or scavenged within dungeons and towns.

Seeking out all the items and secrets in Driftmoon is a considerable, but worthwhile, challenge.  Most objects, from chairs and chests to bookshelves and statues, can be moved, often resulting in hidden treasure.  Rewards range from items necessary for side quests to special goldfish that permanently increase a skill, with treasures and secret passages doled out enough that you’ll be encouraged to search every inch of the beautifully detailed, top-down world. 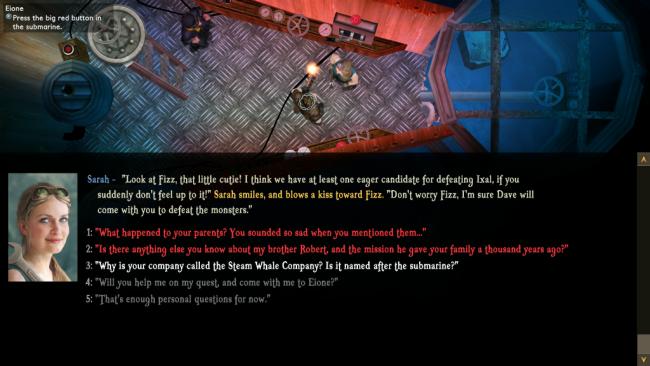 This treasure-seeking encouragement is welcome, as Driftmoon is a fairly linear game otherwise.  Although the lack of backtracking is appreciated, most dungeons are straightforward and relatively short, with some side locations consisting of little more than a single cave.  A handful of physics puzzles add depth to certain dungeons, but only begin appearing around the game’s halfway point.  Completing the game, all of its side quests, and every dialogue tree possible took me ten hours—still a substantial amount of game, but one that is greatly lengthened by the amount of reading required.

Of course, this disappointment in Driftmoon‘s length and linearity only exists because its world, characters, and experience are so charming and engaging that had it been even twice as long, I’d still want more.  Nearly every detail of the game has been thoughtfully considered, from the fill-in mini-map with fast travel to the karmic results of your actions at the end of the story, resulting in a truly rewarding and personal experience.  Its puzzles are interesting without being frustrating, its characters unique yet relatable, and its battle system challenging yet conquerable.  It’s a world you can only fully appreciate from within, and once you do—you won’t want to leave.