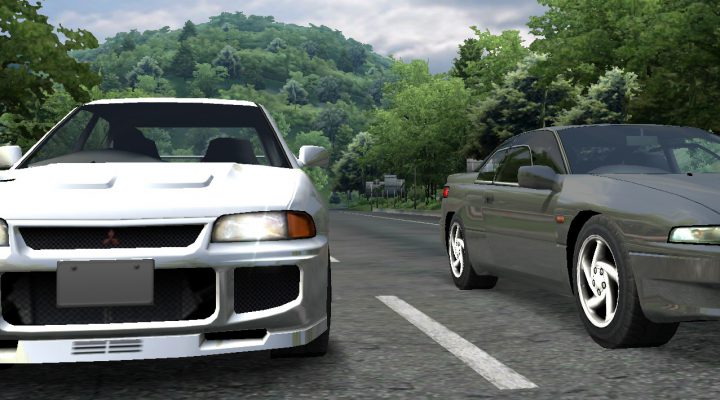 A ton of authentic cars from ten different manufacturers.

Very generous with timers and items.

Gameplay could have been deeper.

If you’ve ever dreamt of living in a version of Japan filled with roving bands of youth in souped-up cars racing the night away, Drift Spirits is for you. Even if your daydreams are a little tamer, you’re sure to have a good time with the title. I personally only know the world of the tuner enthusiast through the one Initial D manga I’ve read and Fast and Furious: Tokyo Drift. However, Bandai Namco has crafted Drift Spirits to appeal to those who get ecstatic at the sight of a Mitsubishi Lancer EvolutionIII CE9A, as well as those who think that sounds like some sort of spaceship.

You are a sassy young racer, fresh to the scene when the game begins. Your first rivalry begins immediately when you meet Afro Hiroshi and beat him in a race. After a few tutorial races, you set your sights on Afro’s gang, the Kamikaze Union, and begin your first set of 20 races to become the best. The story has a few twists and turns, but is standard fare for those who are familiar with racing shonen manga and anime. However, the story frames the racing as having a motivation and makes it more compelling. 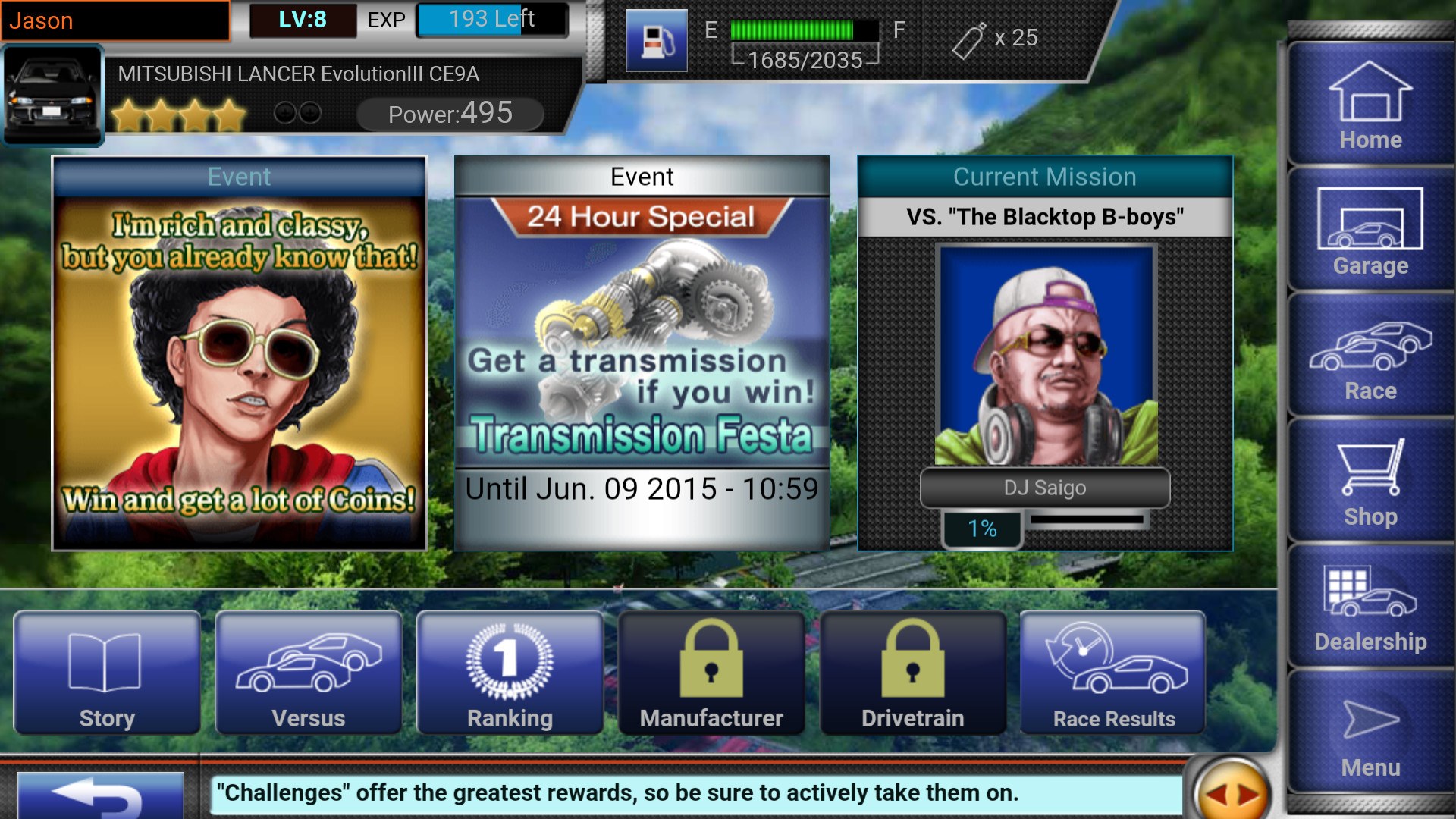 In this game you’ll find one-part drift racing, and two-parts garage sim. You’ll divide your time between the track and the shop, and it creates a good dynamic between real-time gameplay and checking out parts and car stats to figure out the best combo to win your next race.

The standard free-to-play elements are present here. There are timers that count down when installing parts, gasoline which is required to race, tickets needed to get new parts and cars, CP needed to requisition parts. There is also gold that can also be used for special parts and car orders. However, these elements never really get in the way of enjoying a game as you’ll find yourself winning a healthy amount of each of these items during normal racing. Additionally, you get 10 free parts and additional goodies for simply logging in each day.

Drift Spirits has a massive amount of authentic tuner cars from Honda, Nissan, Subaru, Mitsubishi, Toyota, Mazda, Chevrolet, BMW, RUF, and Mini to unlock and upgrade. These cars are rated by a star system with 1 star being the worst and 5 being the best (parts are also rated like this). The more you drive a car, the more “affinity” you’ll gain with it, which will add a small stat boost that’s exclusive to that vehicle.

You can also improve a car’s stats by either adding parts to it, or combining like vehicles into one better one. To go further, parts themselves can be combined to improve their stats. From engines, tires, and transmissions, to nitrous oxide, ECU’s, sway bars, and clutches, you’ll end up acquiring tens of parts a day to manage, combine, and add to your vehicle. 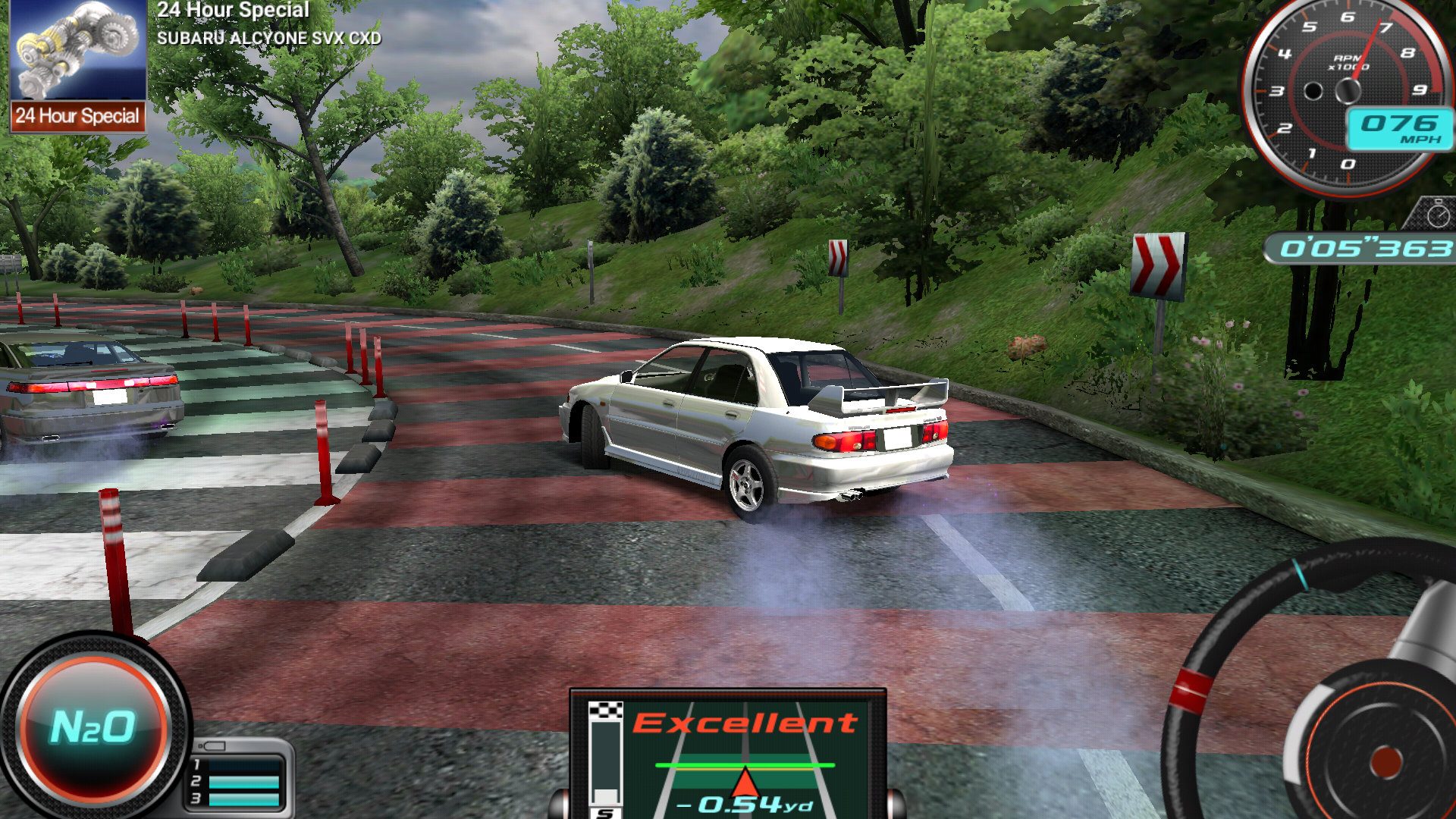 The racing itself is where Drift Spirits falls a little short. Aside from hitting buttons at the right time, there’s little input you have over your vehicle. Although it’s still really fun to take the car you’ve spent so much time leveling and upgrading on the track to see it perform, I would have liked to at least at the ability to steer during the drift. It would have added some much needed player input into the races and might have evened out the disparity of stat-based versus skill-based gameplay.

All in all, I enjoyed my time as a drift master, and the promise of a new car or new parts has me coming back for more. Drift Spirits has a ton of cars, races, and fun to be had, and Bandai Namco exemplifies how the free-to-play genre should be handled. Although the racing itself could use a little more spice, I am more than contented by the car building mechanics. If you’re a fan of drift racing, or if you’re just looking for a fun, free title with plenty to keep you busy, Drift Spirits is sure to satisfy.