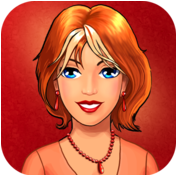 One question: How in the world does Jane learn so many businesses? She’s done Jane’s Realty and Jane’s Hotel. Now she jumps into fashion in Dress Up Rush. While the title has no "Jane" in it, you know it’s the same Jane when you see Jane’s hotel lurking in the corner of a scene.

Like Jane’s Realty, the only thing this one has in common with the others is Jane.  The cluttered story finds Jane and a friend enjoying the beach when her friend suggests she should open a boutique because Jane has great taste in clothes. They catch a beach-side fashion show where Jane meets the designer and makes a deal with him.

In this time management game, Jane opens a basic store carrying two items of casual clothing, and slowly builds her collection by buying upgrades with profits. Once successful, she moves up to more elegant fashion. Every upgrade item improves the score in one of four areas: quality of service, range of a choice (that’s what it says), price and quality ratio, and presentability. As these numbers climb, they don’t affect the game unless they drive up the price. It isn’t clear.

Players give customers what they need whether it’s a magazine or clothing. Sometimes Jane will need to stop at the sewing station to make an adjustment or wrap the gift. Since she serves coffee, she has to clean up after customers or else new customers won’t sit down and shop. Every new customer that enters the shop always asks for a magazine before anything else, which gets old and predictable.

Like most time management games, players can shoot for the goal or go beyond to reach the expert goal. However, it doesn’t reward you for reaching the expert goal. At the end of the level, the screen displays the statistics of how many customers served, how many left, how much money earned and so on. It shows a gold or silver medal based on the score and if it surpassed the expert goal.

The game also shows a path with Jane’s progress, but the path doesn’t make sense either in that it doesn’t give you one star for every completed day (level). The sale mini-game appears after purchasing all the upgrades for the store. Here, each customer comes in requesting one item and leaves. No magazine or trying on clothes this time. Just clear out the store’s merchandise as fast as possible.

Dress Up Rush contains technical and grammatical problems. The game crashes once and the Jane would not budge a couple of times. In both situations, just restart the game and it picks up where it left off.

When the store closes, the sign says, "Close" instead of "Closed." It also has phrases like: "This is a bonus it can make gameplay rather more simple to click on it to activate." "Random request customer can ask clothes at your choice." "Maybe I should think what to start whith." Obviously, the instructions don’t always come through clearly, but it’s easy for experienced time management players to figure out most of the game.

The only bonus that isn’t clear is the snowflake bonus. A bonus object randomly appears on the screen for Jane to pick up. It could be a red shoe to make her move faster or a $ sign to put more money in the cash register. But the snowflake… who knows? It does make customer requests sparkle.

The upbeat music sounds like the French song, Alouette. (Strange analogy, but that’s what comes to mind when the music plays.) Dress Up Rush comes with 45 levels, three stores, and over 100 upgrades consisting of tops, bottoms, hats, bags, shoes, furniture, décor, and flooring.

At least half of the game is easy with the pace of the last third of the game turning frantic especially the last five days. Playing Dress Up Rush feels monotonous even with the many upgrades. The three stores don’t differ much except the style of clothing goes from shorts and tees to suits.

The game does have one clever feature. For the last store, players pick what kind of store they want. It can be unisex like the first two stores, women’s only clothing, or men’s only clothing. This feature might encourage players to play the game again to experience the other stores. But who wants to sit through two-thirds of the game just to reach this level again? It would help if players could pick any pass level to play it again and be able to choose a different store.

If Dress Up Rush gets a sequel, it will need to receive a major makeover to distinguish it from the many time management games on the market especially with fashion as the theme. This one might grab a few fans, but otherwise most will find it ordinary.