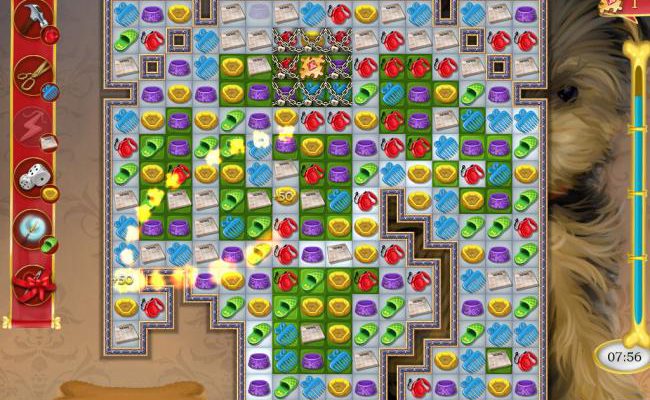 Dress-Up Pups is a light-hearted match-3 game for dog lovers.

Dress-Up Pups is a colorful, relaxing match-3 title from Anawiki and RetroStyle Games that allows you to spend as much or as little time as you’d like making clothing for dogs. There is plenty of gameplay here, for those looking to spend a few hours of their lives playing, but the gameplay itself is pretty standard match-3 fare.

If you’re going to play Dress-Up Pups, you probably won’t be going into it for the story, which is fairly shallow. You’ll play as Pattie, who works as a secretary at the Dress-Up Pups canine clothing boutique. You have dreams of designing your own line of fashions for man’s best friend, but are being held back by Bernard, your boss – the main, and apparently only, designer at the shop.

When Bernard is called overseas to work on a major fashion project, he leaves you in charge of the business at home. Thus begins your light-hearted journey into canine fashion design, which is carried out through a match-3 puzzle style of gameplay.

Gameplay is level based, with certain chunks of levels being assigned to each outfit you need to create. Guests will come into the shop and will order a certain style or theme of outfit / accessories, and you’ll need to play through the accompanying 5 or 6 (give or take) puzzle levels in order to earn jigsaw puzzle pieces that allow you to create said fashions. At the end of each level, you’re given at least one puzzle piece, with each “chapter” ending once you’ve completed that particular dog’s outfit by assembling the completed jigsaw puzzle (there are 21 dogs in all).

Each puzzle level has multiple goals, with one over-arching goal being to make enough matches with the symbols on the board to move puzzle pieces to the bottom of one of the columns in the grid. The levels differ in the grid’s design (they come in the shape of a heart or face, and so on), with a secondary goal being to make matches on all of the green titles, in order to remove the green backing. Eventually, other layers are added to these squares, making them blue, then green, and so on. It’s only after you remove all of the green tiles from the board, along with moving the puzzle pieces to the bottom, that you’ll be able to finish the level and actually claim your puzzle pieces. 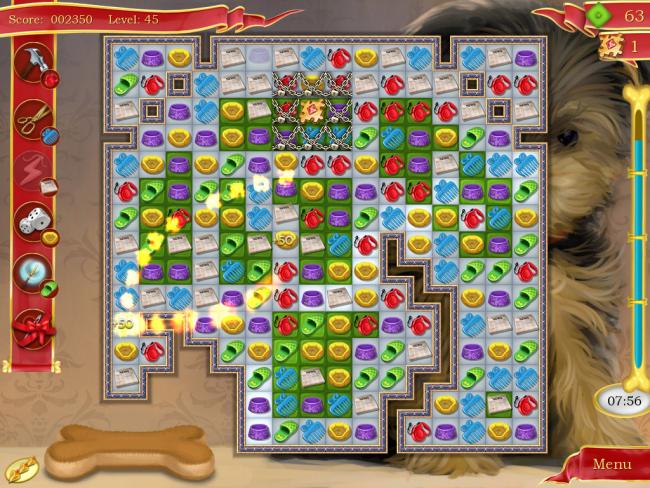 While some levels offer the most generic form of match-3 gameplay – that being to simply swap symbols to make a vertical or horizontal match of three or more items – Dress-Up Pups does offer a couple of slight variations of this. For example, some levels allow you to make matches in chains by simply dragging your mouse in any directional (including diagonally) to remove touching like-symbols from the board, while other levels allow you to remove whole blocks of like-symbols with a single click.

You’ll unlock power-ups as you play, which must be charged up by making matches with a particular kind of symbol (in one level it may be combs and in the next it might be dog bones – it’s fairly random). These power-ups will help you when you find yourself in a jam, by allowing you to clear whole lines of tiles from the board, destroy a single symbol that is blocking your progress, and so on. Unfortunately, you’ll lose any remaining charge at the end of the level, so you start out from scratch each time. Bombs and dynamite also appear on the game grid at random, allowing you to destroy massive sections of symbols, and even create chain reactions of explosions.

While the different kinds of match-3 gameplay are appreciated, as they keep Dress-Up Pups from becoming too stale, the entire experience is still far from revolutionary, as we’ve seen this kind of puzzle gameplay (move a symbol to the bottom of the grid, and change tiles’ colors) many times in the past, just with a different theme. That being said, the game is enjoyable, and will last the average player a few hours, as each dog’s outfit can take upwards of 20 minutes, depending on your own skill or experience level with such games (that is, how quickly you can spot a match).

All told, Dress-Up Pups is an entertaining experience (obviously made more so if you’re a dog lover), but it doesn’t really offer much outside of the standard formula that we’ve seen in these kinds of games time and time again. With a bit more variety added to the polish that’s already here, Dress-Up Pups could easily have been a must-have, but as it stands, it simply falls in line with the crowd.

Pixeline and the Jungle Treasure Review