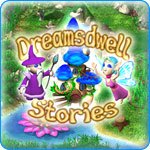 For a puzzle game to really succeed, it either has to be so simple it’s sublime (see Bejeweled or Tetris) or loaded with depth (Jewel Quest, Ancient Quest of Saqqarah). Anything in between, and things get a little murky. The awkwardly-titled Dreamsdwell Stories, unfortunately, falls into that middle ground.

The premise is quite sound. Make chains of same-colored spheres three or longer to make them disappear. When they’re connected they form a beam of light that cannot be crossed, so your lines have to be continuous. Clear all gold-rimmed spheres to end a level before the timer runs out to pass.

Naturally, it’s not quite so simple. There are barriers that need to be destroyed by creating chains beside them, spheres that freeze and need to be thawed by making chains near them or even unbreakable obstacles. Other gameplay twists include silver-rimmed spheres that must be cleared to be turned into gold (which then can be cleared) and some spheres become multi-colored magic spheres, enabling you to change colors mid-chain.

There are power-ups that can be earned, such as explosion power-ups which make the radius of a cleared sphere larger (helping you to break barriers and thaw frozen spheres more easily) or timer power-ups (creating a bigger chain adds more time to the timer).

Framing the gameplay of Dreamsdwell Stories is the story. You are the Magic Chainer, and as such, can collect gold and jewels by making chains. As you play levels, you earn resources to build a little town. Each cleared sphere nets you gold. The longer the chain, the more gold you earn. Chains of eight spheres earns you a ruby, 12 earns you a sapphire, 18 an emerald and 25 a diamond.

Eventually, residents – the “dwellers” – arrive, and help you collect resources and jewels faster. For instance, once you build a bridge, a Troll appears and collects 30 gold per day. The Captain can go on adventures and return with treasure. The Farmer sells his wares for gold. There are many more that appear as new structures are built, and each has a cute one-liner when you click on them.

The game itself is fairly well-made, with average graphics and music, nothing offensive. There were no major glitches, and aside from some awkward writing (“If travel is lucky, Captain’s money is doubled”) there’s nothing inherently negative on that front.

Sounds really interesting, right? The problem is that there isn’t a lot that keeps things moving. Creating the town is a chore of attrition. You will earn enough resources to build; the residents simply make that job go by faster. But the town itself doesn’t really add anything to the game. The characters are pretty one-dimensional, and are not at all compelling. It’s like watching an ant farm.

Unfortunately, you have absolutely no management over the town. It’s just boring. Look at a game like Floating Kingdoms, and you’ll see it is definitely possible to mix resource management with puzzles. It’s a wasted opportunity. The structures and characters feel more like a trophy room rather than a real living, breathing town.

But, at the end of the day, playing the levels in Dreamsdwell Stories is really just a grind. The gameplay is simple – usually a good thing in a puzzler – but to the point of being banal. There aren’t enough gameplay twists or depth to keep things interesting, and sometimes it just gets frustrating. Spheres freeze extremely quickly, and barriers become obnoxious rather than a challenge.

It’s a wonderful premise, to be sure. It’s so nice to see a puzzle game that isn’t in a grid, and has some very unique methods of play. I would rather the developers have spent their time honing the gameplay rather than create an arbitrary story. If there is a Dreamsdwell Stories 2, either make the town interactive, or take a bulldozer to it and give the gameplay the attention is richly deserves.

Gamezebo tip: If you like this type of game, try Floating Kingdoms, Ancient Quest of Saqqarah, and Glyph 2.