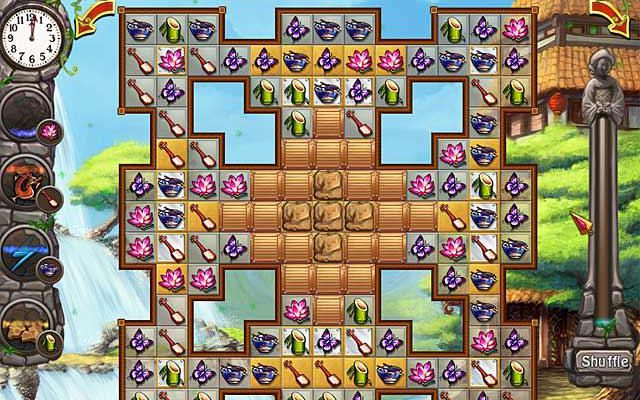 A relaxing yet complex puzzler with tons of extras

Dreams of a Geisha may on the outset appear to be just a beautifully-themed, but standard match-three title, but look deeper and you’ll see a relaxing yet highly complex puzzler that offers four different gameplay modes and tons of extras within each. While not without faults, all of these elements combine to form a pretty enjoyable package in the end.

Interestingly, Dreams of a Geisha starts with full voice-acting in a cutscene that introduces you to the culture of the Geisha. These entertainers have outlasted wars and famine, yet the passage of time has slowly seen them forgotten, or at least pushed to the background in a modern society. You’re told that you need to help the Geisha be remembered by unlocking access to four seasonal temples, but from there, the storyline (unfortunately, and disappointingly) all but vanishes completely. 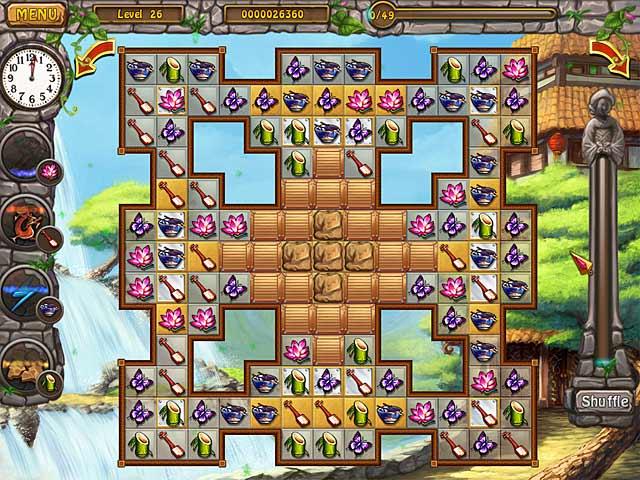 What we’re left with, however, isn’t a complete disappointment, even for the hardcore match-three fan. You’ll start with the standard “swapping” game mode, which sees you switching items’ places to create lines of three or more like tiles. This section of the game consists of 30 levels, and each level is scored separately. Once you reach a certain number of points, you’ll unlock one of the three other gameplay modes.

Pop Mode, for instance, replaces tile swapping with simply clicking on groups of three or more like symbols, even if they’re not in a straight line. Next is “Token in Hand” Mode, which sees you forever holding onto a tile, that can only be swapped out with another by making a vertical or horizontal match of three. Finally, Chain Mode asks you to click on a tile and then drag your mouse to connect all nearby like symbols to form a chain, destroying mass amounts at once with no swapping required.

Within these levels come multiple extras, like locked tiles or stones that must be removed by making matches next to them, bombs or firecrackers that destroy larger sections of tiles, and even four power-ups that are unlocked by matching their corresponding symbols. For instance, the Hammer power-up could be unlocked by making multiple matches with lotus flowers, allowing you to use it to remove one single tile from the board if you happen to get stuck.

While each level has a different board layout (some of which make things much more difficult, as tiles are isolated in small sections where matches are harder to come by), the overall goal in each is the same: destroy all of the gold tiles by making matches on top of them, a concept that should be incredibly familiar to fans of the genre. After completing this initial task, another set of gold tiles appear, but these form a path that you’ll need to help a key navigate to reach a treasure chest on the other side of the board. Throughout gameplay, you can rotate the board either clockwise or counterclockwise, and you’ll need that ability here more than ever, as you must use forethought to decide which tiles to destroy, and when, to help the key fall through the path via the help of gravity. Opening the treasure chest gives you a piece to a jigsaw puzzle, and gathering enough pieces lets you put the jigsaw puzzle itself back together. While novel, this seemed like a silly addition to gameplay when there’s already so much else going on.

All told, Dreams of a Geisha is one of the most well rounded match three puzzle games to release in recent memory. Not content with offering a single type of gameplay, we’re given ample variety to choose from, and even the choice between being timed and un-timed, should we prefer to relax, rather than be rushed. Match-three puzzle games may be a dime a dozen, but Dreams of a Geisha does enough to positively stand out from the crowd.