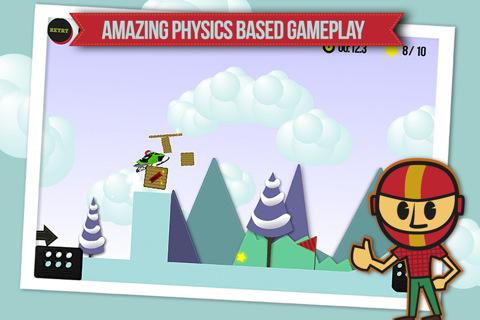 One of the harshest criticisms any gamer can level at a game is “the level design stinks!” The best games answer those armchair designers with the ability to use their tools and see what they can do. Some of the greatest games, particularly in the first-person shooter category, stemmed from those home-grown efforts. Dream Track Nation also allows you to create your own tracks, and gives you a good set to try, but falls over itself a few times in an attempt to be great.

Spread across three areas, Dream Track Nation‘s 60 built-in levels range from simple blast-throughs to maddeningly puzzling. Obstacles like wooden boxes require you to build up enough speed. Other times, you’ll have to brake and make sure you don’t miss a small tunnel. Levels move up, down, and all around. As you undoubtedly take air, you can use some fine tilt controls (or on-screen buttons if you prefer) to do flips, helping your time score along. But not all is perfect, as you’ll soon find out.

The two modes change the goal. One of them is a simple beat-the-clock mode, while the other is trying to capture stars. Both are fun, but the star-catching mode adds a unique twist in that some of the stars aren’t easily captured by simply driving straight through a course. Often they’re on a platform you’ll need to gain enough momentum to reach. Some of them are so clever as to require you to reverse from the starting line to find them.

Navigating the courses is really easy to get into, as the controls are simple, but allow you to add your own finesse. Learning how to go around a loop while tilting your car to move more efficiently or add an extra flip can mean the difference between success and failure.

Along the way, you’ll unlock multiple cars, each with different attributes. The best ones are the speedier ones, some of which are absolutely necessary for later levels. The graphics aren’t anything particularly fancy, but have a nice style to them, and create a myriad of track designs from very little. The sound is bopping and definitely does a good job of complimenting the action.

The biggest feature is the level designer, which gives you all the tools to create a level as complex as you’d like. You can add background elements, power-ups, ramps, loops, and more. However, everything is so small and fiddly on the iPhone that it’s almost impossible to create anything of substance. This problem is alleviated substantially on the iPad, but it’s definitely an annoyance on its smaller sibling. It’s also a bit frustrating that there’s no tutorial, so you’re set loose to figure out how to add, rotate, or change your course. 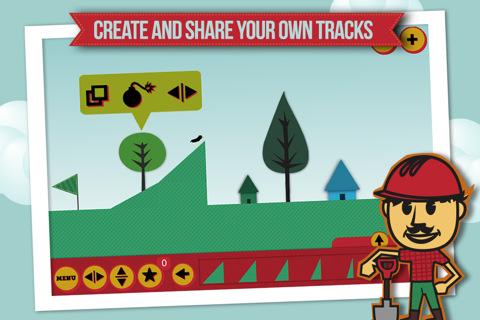 And that isn’t the only annoyance in Dream Track Nation, as the game has a few bugs ranging from small to quite large. After earning the first unlockable car, for instance, Dream Track Nation reset itself and changed form the star mode to the time trial mode. The time trial is normally unlocked after completing the star collect mode, but wouldn’t let me play it until I uninstalled and reinstalled the app.

The level design, particularly in the early and later levels, is not great. The earliest levels can be completed without any thought, while later levels either require near-superhuman precision to avoid pits, or force you to replay earlier levels to earn just the right car to finish the job. The over-reliance on this tactic, as well as power-ups like floating or extra-large jumps, creates some frustratingly cheap levels later in the game.

Dream Track Nation could be something great, but ends up being something that’s merely okay. On paper, it’s got everything you’d want in a custom racer. But there are too many rough edges to give it the fullest, heartiest recommendation.