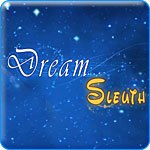 Have you ever had a psychic dream? Among people who believe they are psychic, nearly half claim to get their best visions through dreams. That’s the premise a Dream Sleuth, a hidden object game that has you solving a mystery with the help of some surreal psychic dreams and some good old fashioned detective work.

The story is a real strength in this game, with plenty of twists and suspense. A young girl is missing, and the detective on the case doesn’t seem to be doing a good job of finding her. As a former investigative reporter, your Grandma has plenty of experience when it comes to solving cases, but she’s a bit preoccupied planning her 75th birthday, and she thinks she’s too old to do much about it. Later that night, you have a detailed psychic dream about the case, and uncover new details that could help to find the missing child. Can you solve the mystery and rescue her before it’s too late?

The game play is a cross between traditional hidden object, and point and click adventure, although you’ll find far more logic puzzles than hidden object or inventory puzzles. Strictly speaking, it’s not your typical hidden object game. You may be asked to find an object, like a business card organizer. However, instead of finding it directly, you instead need to manipulate random items like a day planner which covers up a set of keys, which can be used to unlock a cabinet, where you can remove books that reveal the organizer. It’s more like a "missing object" game than a hidden object game, if you catch my drift.

Many objects and locations in the rooms can be manipulated to uncover other items, like by opening closet doors to reveal the contents inside. The hidden object tasks vary, but you are rarely asked to find more than a couple items at a time. Often you are asked to find items of a certain type, like stars, or money, or stuffed lions. Objects are blended in fairly well, although not always perfectly, and you can see slight edges on some. You can click the question mark for hints at any point. Hints are rechargeable, and there’s no timer.

One thing to note is that the puzzles and object searches get markedly more complex as you advance through the chapters, although they never really pose a serious challenge. It’s fair to say that in the beginning, the game plays itself, since everything you can manipulate sparkles with a mouse roll over. You may find that the game seems too easy in the beginning, but it’s worth it to keep playing, since the difficulty level does pick up.

Perhaps the greatest strength in Dream Sleuth is the variety and creativity of the puzzles. Have a paper and pen ready to help you out. Early on, you encounter a piano puzzle, which has you copying a melody as it’s played. It’s a bit like "Simon," where you need to repeat a pattern by sound or color. Other games include multiple memory matching games, classification games, a jigsaw, a slider puzzle, and a riddle shuffling puzzle where you need to rearrange parts of a fable. The spaceship repair puzzle is particularly tough. You have to rearrange pipes to make a path for electricity to flow through. Taking pictures of the wildlife in the park is also neat, even if it’s not totally realistic. You must come up with ways to lure the animals out for pictures, and use the camera to catch a shot.

The artwork is done in photorealism, with images of actual people representing the characters. These are sometimes doctored up, and truth be told, they look a bit odd. Their mouths do move when speaking, and the voice acting is believable and well used.

The music does a good job of setting up the atmosphere. What’s really nice is the wide variety of scenes and backgrounds you encounter when playing across the 18 different chapters. As for length, it’s around standard, taking roughly 3 to 4 hours to beat. Of course, replay value is questionable, once you’ve solved the mystery.

On the downside, the tasks aren’t always logical. For example, when asked to find something that will help you figure out the girl’s identity, you completely ignore obvious items like journals, schoolbooks, and a cellphone…but ultimately select a piano. A piano? Sure, maybe she’s a music lover, but wouldn’t it make more sense to find something that would tell you her name?

Similarly, the plot is unbelievable at times. Grandma sends her granddaughter over to talk to the missing girl’s teacher, as well as potential kidnappers. Now, in a real missing child case, it seems unlikely that the school or anyone else would want to talk to random people that wander in off the street. It’s even more unlikely that the police would give forensic evidence to a teenager, let alone ask her to help out with tracing tire prints! But, then again, it’s just a story, and it is interesting if you can overlook the silliness.

While Dream Sleuth isn’t exactly ground breaking or particularly innovative, there are plenty of things to do, and the pace is good. On the whole, it’s a fairly average hidden object adventure game with lots of clever logic puzzles to keep most players busy.