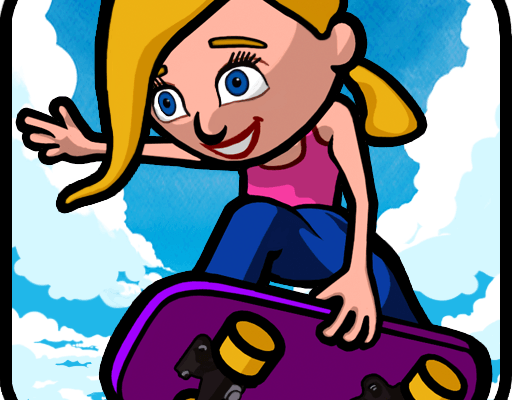 Dream Skate is an absolute dream to play

Poor Penny. We’ve all been where she is: stuck on a boring road trip in the family car, day-dreaming about doing something, anything, more enjoyable than what’s she’s stuck with. Fugazo’s Dream Skate is what this girl’s dream is about, and it’s an absolute dream of a game.

The game’s premise is that a young girl named Penny who during a drive with her parents sees a kid skateboarding on the sidewalk, dreams about taking up the sport. As a result, she has to skate through various suburb neighborhoods, ducking under cars, bouncing over rooftops, and rolling across power lines. Along the way she has to avoid other hazards like pigeons, fire hydrants, mailboxes, and fissures in the ground.

Actually, if I was a parent with a kid determined to take up skateboarding, I’d be terrified of letting them out the front door in these kinds of area. The places are deathtraps for pedestrians, let alone wannabe extreme sports junkies.

Tapping the screen will make a skater jump, holding down on the screen will cause the character to duck, and releasing the hold results in a higher jump. Each level has multiple routes that players can take, though the different paths net varying rewards. Taking risks and fast reactions help out a lot here.

As players progress through levels, they collect candy for points. Point scores net a star rating and tokens at the end of a level. Stars eventually unlock new neighborhoods to skate through, while the tokens can be used to purchase new characters and helmets (which provide temporary protection when crashing).

Dream Skate is an incredibly simple platformer, but that doesn’t mean it’s easy. It’s not uncommon to take a few times just to get to the end of a level; earning a high enough score to get the maximum star rating is actually pretty difficult. A platformer that’s challenging enough to keep adults interested but easy enough for kids to learn how to play is a pretty rare find.

But what’s most impressive about the game is how joyful it feels. For anyone that’s ever spent a summer learning how to skateboard (or rollerblade, or whatever) as a child, the simple (yet lovely) graphics, the music, and the overall tone is both nostalgic and grin-inducing.

Dream Skate is one of those games that is, in a word, great. It’s simple, Easy to play, yet challenging enough to hold players’ interests. Not only that, but it’s just fun and charming. Developer Fugazo has crafted a real gem here, and they should be immensely proud of it.