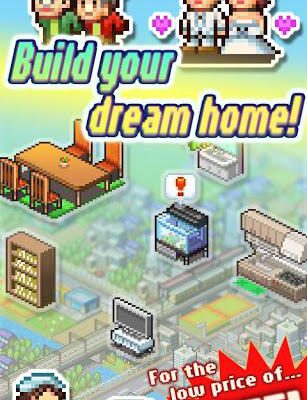 After numerous ventures into the mobile gaming space like Game Dev Story and the recent Pocket Stables, developer Kairosoft has released Dream House Days, their first attempt at a free-to-play title. It’s an effort that feels slightly outside the Kairosoft norm, featuring ads and in-app purchases. However, the final result is a worthy addition to the Kairosoft family, though it lacks some of the detail that made its predecessors truly special.

Dream House Days puts you in the role of landlord. You’re given an apartment complex with four units and one tenant. Your objective is to furnish the apartments, build more apartments, find new tenants, collect their rent, and rule every aspect of their lives. There’s a lot to do and plenty of menus to navigate. Kairosoft fans will quickly adapt to the menu-based gameplay and lack of an in-depth tutorial. Newcomers are likely to get lost in the menus for a bit, but they should be able to adapt after a short while. 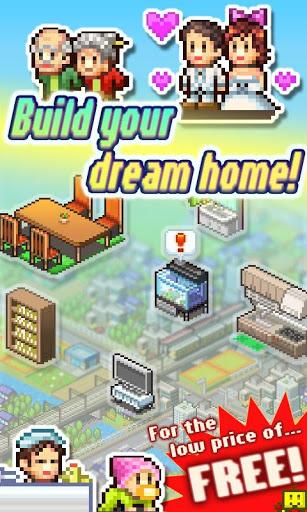 The menu system is the gateway to the entirety of the game. Right off the bat, you’ll put the “install” menu to good use, by building and furnishing rooms inside apartments. Each piece of furniture does something different. While it’s cheap to create an apartment with just one room and no furniture, it’d be difficult to find someone willing to live there. Smart placement of rooms and furniture is essential to success. Certain combinations of flooring and furniture will create themed rooms, allowing for various stat boosts for its tenants.

The tenants are the foundation of Dream House Days, and their lives will often determine the difference between success and failure. The game starts with just one tenant, but more will quickly need to be brought in to help cover expenses. Recruiting tenants is simple: you recruit candidates, they visit the apartment, and they’ll offer a deposit if interested. Just like real life, students will live just about anywhere cheap (even if they don’t have a bathroom), while professionals pay more but expect higher quality. Regardless of who moves in, their lives are now available to be influenced. 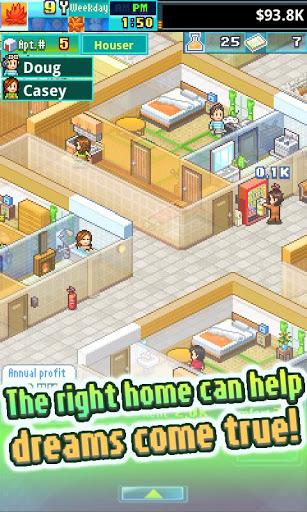 Interacting with tenants is hardly the same job as a real landlord. There’s no need to bother someone about rent, make repairs, or put up with complaints. Instead, Dream House Days focuses on the personal lives of its residents. You won’t be interacting with them directly, however. Each tenant has an array of stats that shapes his or her personality, which influences every aspect of life. Stats can be altered through items, furniture, and clothing. The right level of stats can influence new job opportunities, which lead to more money and higher rent.

Watching life pass by is one of the most interesting parts of Dream House Days. As characters grow, they’ll meet other people, fall in love, get married (sometimes to other tenants), and have children. Eventually, those children grow up and they repeat the cycle, moving into an empty apartment, if available. Unfortunately, the lack of direct interactivity is disappointing. While Kairosoft never tried to recreate The Sims, it would have been nice to see a bit more interactivity with the characters. There are tons of ways to influence their lives, but it’s hard to ignore the feeling of a missed opportunity. 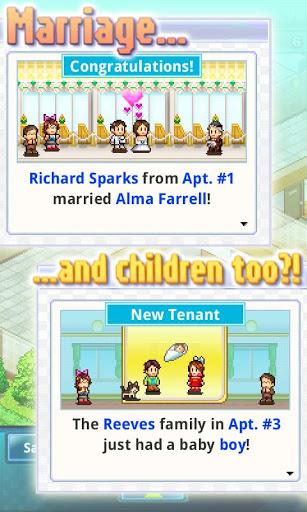 Despite that, there’s a ton of content in Dream House Days, and it’s just not possible to go over every bit of it. The unlockable outfits, researchable furniture, scratch cards, new jobs, and building expansions are all just a taste of what the game has to offer. What makes it even more impressive is that it’s all free. Unfortunately, Dream House Days is also really hard, as your building will likely be running at a loss for quite a while (especially if you house students). Tickets can be purchased over Google Play, and can be used to get helpful items in-game, but they only make things a bit easier, and are hardly necessary.

In the end, Dream House Days is just another addition to the Kairosoft library. Kairosoft fans won’t find that it does much to stand out from the rest. Newcomers will be attracted by the lack of a price tag. There’s certainly nothing wrong with what’s here, but most players will more than likely prefer to stick with their Kairosoft game of choice.