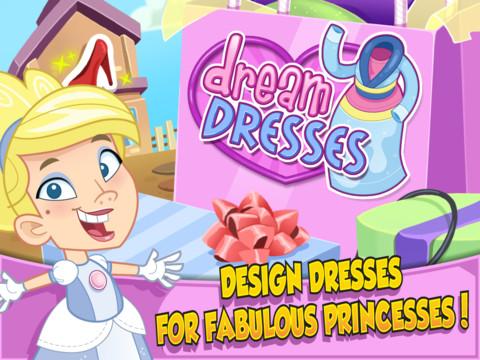 Dream Dresses is an off-the-rack store management game for iOS.

It’s time to own up: you’ve always wanted to be a pretty, pretty princess, right? No, don’t drop your eyes. It’s OK. Everybody likes to feel beautiful once in a while. And while Dream Dresses for iOS isn’t strictly about dressing up and showing off, the game will give you a shot at running your own dress shop and managing the merchandise on the rack.

Dream Dresses is a store/time management game by Breaktime Studios, the makers of Sweet Shop. In fact, Dream Dresses looks and plays much like its predecessor, except your merchandise is dresses instead of dessert, and the woman behind the cash register looks like a Disney Cinderella knock-off instead of a Willy Wonka cosplayer. In fact, the majority of your clientele bears an uncanny resemblance to Disney’s most popular princesses, but counterfeit Belle still needs her dream wedding dress, so get to it.

Basic gameplay in Dream Dresses consists of gathering materials for your dresses, putting them together on your shop’s sewing machines, serving clientele, keeping your racks stocked, and decorating your store. Occasionally, making a dress will involve playing a mini game, like tracing an easy pattern with your finger, but otherwise, your dress ideas are pretty much assembled for you. You can sell ball gowns, wedding dresses, Native American regalia, pirate costumes, and Arabian fare, to name a few choices. Each dress takes a certain amount of time to sew, and you have to balance your time carefully or else you’ll end up with no dresses to sell and an unhappy clientele.

You can also stock and sell accessories, like purses, hats, and shoes. Accessories bring in additional cash, though customers may also tip you with items that are typically only bought with premium currency, which is a nice bonus.

There’s nothing overwhelmingly complicated or original about Dream Dresses. It’s simply a middle-of-the-road shop-management game, though the basic gameplay still holds some appeal for younger players. The game is easy to play, and even though you have to think ahead in order to stock your shelves most effectively, Dream Dresses is pretty laid-back fare. 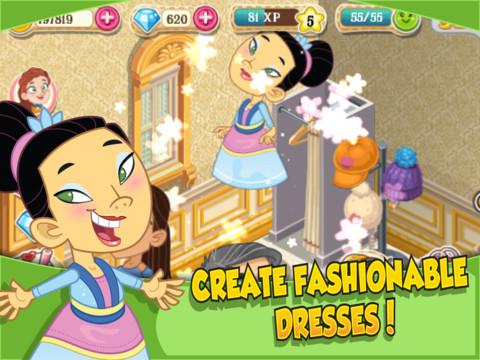 Of course, there’s nothing stunning about Dream Dresses, either. The graphics are kind of dull, despite the “familiar” client base. In a way, that familiarity makes things worse, because the game’s generic visuals make Cinderella, Belle, and Jasmine look like suburban soccer moms. The dresses aren’t very interesting, and the fact that you aren’t more involved in designing them is kind of disappointing.

Dream Dresses isn’t a bad game, but it doesn’t have the makings of a stand-out hit, either. A very young fashion enthusiast might get something out of it (and the game’s tendency to reward you with premium currency/items makes it all the more accessible for kids), so if you have a little sibling who’s totally wild for ball gowns, Dream Dresses might prove to be a fun distraction for him or her.