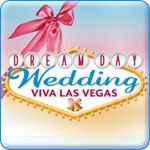 The fifth hidden object game in the Dream Day franchise, and the third to focus on weddings, Dream Day Wedding: Viva Las Vegas puts you in charge of planning a lavish Las Vegas wedding for Kelsey and her fiancé David. While some sequels can start to lose their lustre, Viva Las Vegas seems as fresh as ever thanks to some clever new twists and a romantic, "feel good" story.

The gameplay – which involves searching cluttered scenes for a list of objects and clicking on them – will be familiar to hidden object game veterans, but it’s the extra touches and attention to detail that make Viva Las Vegas stand out as a cut above.

For one thing, everything you’re doing ties in with the story and the build-up to Kelsey and David’s "big day," whether it’s finding missing luggage tags so the couple can check into their hotel, picking flowers for the bouquets, choosing jewellery for the wedding party to wear, shopping for wedding favors, or even scooping gelato to ease frazzled  pre-wedding nerves.

In addition to the straight-up hidden object challenges, there’s also a nice balance of other things to do, such as spot-the-difference, casino games (like "21" and memory match), and hilarious new "Trapped" levels where you find yourself stuck somewhere – like a locked bathroom or elevator – and have to figure out how to escape by picking up objects and use them in the environment. The popular Wedding Crisis levels from past games – where you must act quickly to fix an unexpected catastrophe, like a storm wrecking the wedding venue – are  back as well.

You can play the game in either timed or "carefree" (untimed) mode, and you can switch between the two on the fly from the Options menu. You start each scene with a few hints to reveal the locations of hard-to-find items, and can earn more by finding golden dice.

One thing I really enjoyed about Viva Las Vegas was how seamless and smooth the gameplay was. The game isn’t really broken up into levels, but rather once you’ve finished one thing, something else pops up. You can be juggling up to four or five things to do at once, and can choose which order you want to complete them in. Sometimes your cell phone will even ring in the middle of the scene as your clients give you a new task or change an existing one (such as telling you that they don’t need that many party favors after all, so you can cross some of the items off your list).

There are a variety of ways to earn Palladium Points in the game, which can be spent on upgrading the wedding venue to make it look as beautiful as possible. You can also play around with the design of the cake and bouquet.

The graphics are wonderful, and the soundtrack is a pleasant collection of well-known classical pieces from the likes of Bach, Mozart, Pachelbel and Vivaldi.

In fact, my complaints with Dream Day Wedding: Viva Las Vegas  are few. Towards the end of the game, the locations and even some of the tasks start repeating themselves. (I found myself wondering why I had to pick out multiple sets of jewellery, or look at even more cakes). And in spite of the game’s glamorous setting, few of the locations you’ll visit – such as a kitchen, a jewelry shop, a hotel room, a florist – actually scream "Vegas!" Forget about visiting the Bellagio, Luxor, Excalibur, Golden Nugget, or any other Vegas landmarks.

Nevertheless, Viva Las Vegas is a well-polished and highly enjoyable game whose playful twists and solid hidden object gameplay should keep fans of the genre entertained – whether they’re new to the Dream Day series or not. This is one series that definitely seems to be improving with age.