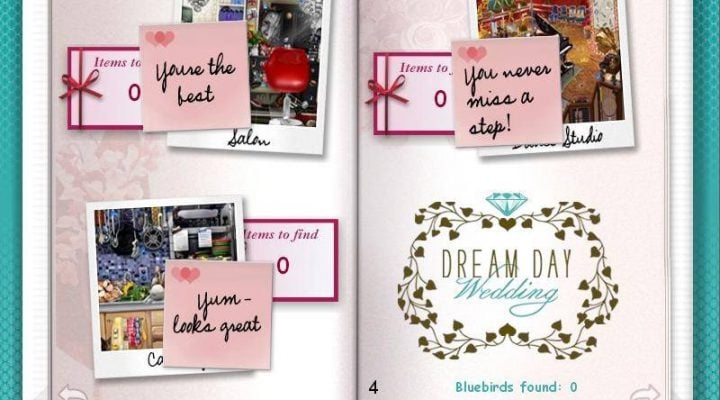 The bride is undeniably the center of attention on her wedding day: the hair, the dress, the bouquet, the wedding cake… everything has to be perfect. However, another person who is almost as important as the bride – at least when it comes to making everything happen behind the scenes – is the best friend. The best friend is the person who works tirelessly to make sure things go as planned, and is also the one who does damage-control when things go wrong.

In Dream Day Wedding, that best friend is you. Your pal Jenny’s big day is fast approaching, and you’ve been put in charge of planning her wedding and making sure it goes off without a hitch. This is easier said than done, because as anyone who’s gone through a wedding knows, nothing ever goes quite according to plan, and little issues pop up as sure as bread out of a toaster.

Your main task is to visit various shops, such as the florist, bakery, salon, jeweler and dress maker, and pick up a list of key items that Jenny needs before time runs out and the stores close for the day. Each shop is filled with random objects with the key items cleverly hidden among the clutter, so it will take a keen eye to locate everything on the list.

Dream Day Wedding scores major points for its presentation, which takes the wedding theme and runs with it in a few different unique ways. For example, progress through the game is recorded in the format of a wedding scrapbook full of photos and mementos, with each turn of the page revealing a new challenge. The Hints system comes in the form of a Cupid who reveals the location of an item by shooting an arrow at it. The soundtrack is a pleasant mixture of well-known classical tunes from the likes of Mozart, Bach and Vivaldi.

As well as looking for the items on Jenny’s list, there are also special bluebirds to collect that will give Jenny a better anniversary depending on how many of them you can find.

After all the items in a given day have been found, you have the opportunity to play one of two bonus games. The first, Perfect Match, is a game of memory where you have to turn over cards and match together the two that have the same wedding-themed picture. For each successfully completed Perfect Match game you’ll earn an item for Jenny and her beau to take on their honeymoon (like a passport or a camera).

The other bonus game is called Choose A Story, and this is a shining example of one of Dream Day Wedding’s most unique features. It’s not a game of skill per se, but rather a set of paragraphs that tell the story of how Jenny and her fiancÃ© Robert met and the steps that led to their engagement. After a short introduction, the story branches into three parts, and by choosing one, you get to guide the narrative down a path of your choice. Did Jenny meet Robert at her teaching job or during her morning run? Did their first date go smoothly or was it a disaster? Did Robert propose in a private and romantic place, or in front of a big crowd? It’s all up to you.

Just when you think you’ve figured out all there is to know about Dream Day Wedding, the game throws out a bit of drama to spice things up and see how well you can perform under pressure. Every so often a major wedding crisis will occur – the kind that can cause a bridal meltdown if you don’t act quickly. In these special stages, you’re called to a specific store where a disaster of catastrophic proportions has taken place. For example, the florist calls to say that the bridal bouquet has been destroyed by a rogue swarm of ladybugs and it’s up to find a new set of items so that you can pick out a new bouquet.

These Wedding Crisis scenarios are always hilarious, and feature a completely redrawn version of the shop that depicts the disaster in progress – the florist’s shop, for example, will be overrun with mutant-looking yellow and red ladybugs happily munching on what remains of Jenny’s lovely bouquet. However, with items scrambled and rearranged from their usual locations and less time on the clock than normal, these stages are also quite challenging. Your reward will be the ability to choose the appearance of the replacement item that will later be featured in the couple’s wedding photo.

The one complaint with Dream Day Wedding is that three hints per challenge seems too few and it’s frustrating to be stuck with one or two items left on the list. (There is a way to turn the time off in the Options menu, but this shifts the balance too far in the other direction by making the game too easy.) A better system – and one that has been used with success in other games – might be to offer unlimited hints but to take major chunks of time off the clock every time a player uses one. That way, it’s up to the player to decide how many hints they can afford to use.

With that one quibble out of the way, I can safely say that Dream Day Wedding is a great all-around package. The rooms are beautifully drawn and detailed, the gameplay is entertaining and challenging, and there are enough twists and turns in the formula to keep things from getting stale. The best part is the ability to create the story as you go along – and if you’re curious about what would have happened if you’d chosen a different path, you can always replay the game again and find out – you’ll be given different lists of items to find so the experience will never be the same twice.