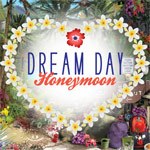 Yep, it’s up to you to make sure our cozy couple is enjoying their Hawaiian honeymoon, in an attractive, story-driven hidden object adventure.

Hidden object, of course refers to the hot casual game category whereby players must hunt for and click on well-hidden objects on a cluttered scene. Items are listed on the left-hand side of the screen — such as a car, watch, key, phone, giraffe, rope, tie, lizard or ring – and you must scour the environment and click on as many of the listed items as you can before the timer runs out.

In Dream Day Honeymoon, players can expect great-looking scenery, such as the hotel lobby, beaches, boats, spas and underwater locations. When completed, the image becomes a postcard to friends and family. If stuck, players can click on the Hint tab, which causes a little Cupid to fire an arrow in the direction of a hard-to-find item. As an extra task, you can try to find as many little yellow birds on the scene to replenish your limited Hint options (bumping it up from 3 to 4 hints left, for example).

Every few levels or so, Jenny and Robert will come to a crossroad in the story and you must click to guide them, each with a unique outcome. For example, the first choose-you-own-adventure scene, you will be asked what to do after finding a mysterious object, and then should you follow one path or another, and finally, what to say to characters you’ll meet along the way. This story element adds a nice touch to the crowded seek-and-find genre.

Other mini-game elements include bonus tasks such as trying to find 20 objects on the screen within a predetermined amount of time, such as smiley faces or suns. Players will also be treated to Concentration-like memory games, where you must click on face-down cards to see what’s on their face and then make a successive match to remove them from the board; over time this exercise gets harder with many more cards on the screen.

As previously mentioned, graphics are one of this game’s strong points, with highly-detailed and colorful objects and environments. Some items, however are quite difficult to find, such as one frustrating scene when trying to hunt for a strawberry, which was placed in the middle of a flower of the same color.

Other issues exist, too. Players who bought Dream Day Wedding might find it really doesn’t offer anything different than its predecessor. Overall, however, fans of seek-and-find games should get a lot out of Dream Day Honeymoon as it is a very good – and good-looking – casual download (and with enjoyable Hawaiian-themed music). And at the risk of stereotyping, women especially should enjoy the story, mini-games and choose-your-own-adventure elements (as did my wife, while playing this game on an entire 4-hour flight). While not perfect, it should easily satisfy fans of the genre.