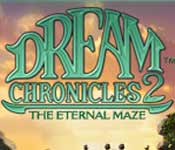 Dream Chronicles was one of 2007’s best casual titles, a Myst-style adventure featuring stunning Art Nouveau-inspired graphics, gripping music and an absorbing storyline. It offered an exceptional, albeit short, excursion into a fantasy world par excellence. Now, the sequel, Dream Chronicles 2: The Eternal Maze, has arrived, and it’s destined to bestow another solid dose of what made the original so enthralling.

Commencing where the first installment ended, this follow-up continues the earlier tale. Lilith, Queen of Fairies, is still up to her no-good tricks. And, Faye, the mortal whose character you play, is still searching for her fairy husband Fidget and their daughter Lyra. One puzzle at a time, she must solve the mystery facing her and rescue her family from Lilith. Nevertheless, it won’t all happen in this installment. Without spoiling the story, let’s just say that the final denouement will have to wait for Dream Chronicles 3.

Your quest is accomplished location-by-location across 50 eye-catching backdrops, the details of your journey recorded in a special diary as you go. This time, however, you’re not completing the game’s 80 puzzles one at a time in sequence. At least, not always. Often, items required for one puzzle are sprinkled across several locations, and a small amount of backtracking is required. And, as before, some objects require greater scrutiny to locate than others.

Object interaction is quite simple, too. Clicking items places them into your inventory (at the bottom of the screen). You can then use these collected bits and pieces on other articles to solve the game’s mysteries. You never lug around any unnecessary goods either. Once employed, they disappear from inventory.

As before, a fair variety of puzzle types are incorporated. Keys are required to open doors, drawers and boxes. Some conundrums require locating and assembling various parts to repair a larger object like a machine or bridge.

Moreover, each scene usually incorporates multiple brainteasers. For example, near the start of the game you’re presented with a scene of a large tree. Several pieces of outer bark are removed to reveal the carved shapes of five animals. Your task is to locate the critters that correspond with those shapes within the scene (a straightforward matter). When you do, they’re placed into your inventory as cutouts of those five carvings. Pop these into their correct spots on the tree and the original five pieces of outer bark reappear. Return them to their correct locations and a door in the wall opens. Simple, right?

Puzzle items, however, are not all you’re acquiring. As with its predecessor, Dream Pieces must be collected. You’ll find, if you’re lucky, 138 sparkling gems strewn throughout the landscape that automatically populate special Dream Jewels. Moreover, you have to locate the Dream Jewels themselves. And, that’s still not all. Complete a Dream Jewel by collecting sufficient gems and you’re presented with a word scramble to unravel, one that offers clues to a future conundrum. Choose "Meditate Now" to tackle the poser right away or "Unlock Secret" in your diary to solve it later. While 15 Dream Jewels are available, only eight appear in a given game, encouraging you to replay the quest.

Dream Chronicles 2: The Eternal Maze is not perfect, but it’s nigh well close. While engaging, the narrative is not quite as compelling as that of the original. Of course, that’s often the case in trilogies (no excuse, just fact). A bit more character development and background story would have fleshed things out better and made the tale a touch more immersive. It’s also a bit on the short side for an adventure, though, improved over its forerunner. Five or six hours will be tops in playing time for fans of the genre. Most of the game’s puzzles are rather rudimentary, as well, and will do little to overtax the abilities of old-school adventurers.

Still, this puzzler does much more right than wrong. To say its production values are excellent is almost an understatement, as it’s among the cream of the crop in casual games and rivals anything in the dedicated adventure sector. Like its predecessor, it’s an amazing piece of craftsmanship. Visuals are beautifully rendered. Each scene features gorgeous imagery, with many including animated objects like falling leaves, rippling pools and tumbling waterfalls. Atmospheric audio accentuates play. Exceptional music and sound effects bring the game’s fantastical world to life. Plus, an unexpected plot twist adds to the mystery, while a built-in leaderboard allows you to compare your questing skills with those of other players.

If you’re the least bit interested in puzzle-based adventures, don’t fidget in your seat. Dream Chronicles 2: The Eternal Maze is an endearing, intriguing and original quest – a fairy-tale that both enchants and entertains from beginning to end.

The Count of Monte Cristo Review