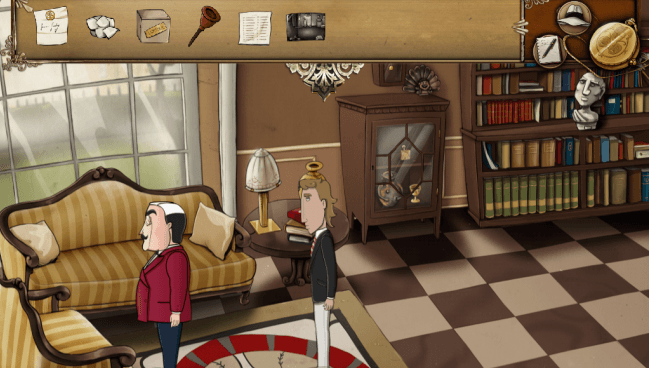 Adventuring that’s only good in your dreams

Dream Chamber is a brand new point-and-click adventure game from Microids that’s set in 1930s America, and gives players a highly stylized tale of item collecting and dialogue trees. The storyline itself is par for the course with engaging detective novel fare, and features a cartoony, almost-noir sense of presentation and progression. You play as Charlie Chamber, a wealthy-beyond-words man who’s taken it upon himself to try his hand at being a private detective, much to the resistance of the actual private detectives in town. But when a highly publicized museum theft occurs at his girlfriend’s latest charity event, Charlie will stop at nothing to make sure that he’s the one on the case!

It’s a very nice setup, and the action moves along accordingly at a pretty fair pace, although most of the characters that populate the game world of Dream Chamber are decidedly unlikable, especially Charlie’s vapid girlfriend and the creepy dream version of Charlie named Charles. However, the visuals and sound design more than make up for what Charlie and company might be lacking in the personality department. Everything in the game positively pops with bright and colorful illustrations, and a cool wavy visual effect really accentuates the many dream sequences, in addition to some serious top-notch voice-over talent. The actual gameplay is standard point-and-click adventure in every sense of the word; but the big twist here is that Charlie has the uncanny ability to revisit everywhere he’s been in his own dreams, to get a deeper or longer look at some all-important evidence! 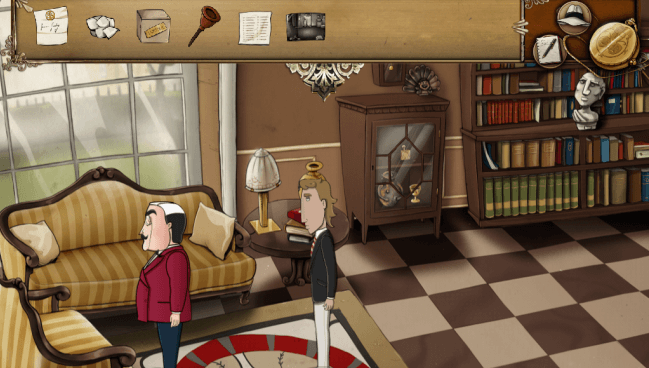 For instance, in one scene early on in the game, the inspector working the case accidentally drops a list of stolen items onto the floor of his office. Charlie, being the well-mannered gentleman that he is, quickly bends down to pick up the list and promptly gives it back to the impatient inspector, silently wishing he had more time to look over the items on the list in greater detail. When players return to the dream version of this scene a few short moments later, a glowing stolen objects list rests on the floor exactly where the inspector had dropped it in real life, allowing Charlie to scrutinize its contents now in the privacy of his own subconscious mind. It’s certainly an interesting mechanic, and one that serves to accentuate all of the amateur private investigating that you’ll be doing by day (NOTE: Just be sure to go into the menu and manually save your game at regular intervals, as Dream Chamber disappointingly does not seem to include any sort of auto-save feature).

Switching between the waking and dream worlds is as simple as tapping on different locations that show up on your city map, although sometimes the need to go all the way back to your room just to go to sleep, and then returning back to where you already were can be a little bit cumbersome. Even less fluid, unfortunately, are Charlie’s movements and reaction times in the game. When Charlie moves around a location or turns to face a different direction, it’s like there are a handful of frames missing in his overall character animations. Picking up items or interacting with various things in the environment are all presented with Charlie extending his arm out, and then having whatever invisible action occur miraculously (or lazily) off-screen. Certain hotspots are also incredibly small and difficult to tap on, and it can be a real challenge sometimes in trying to differentiate between interactive items and static components of the scenery. 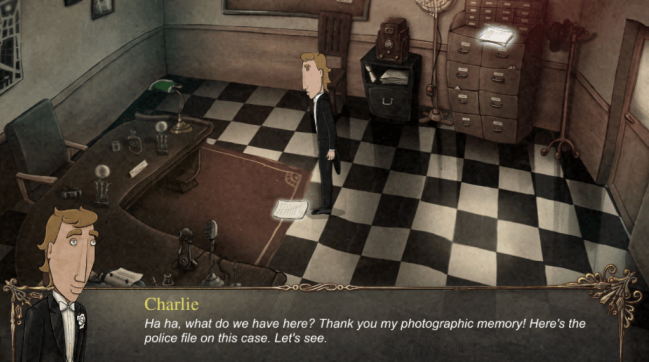 But the biggest flaws with Dream Chamber are in the extremely off-putting and bizarre dialogue battles that occur at regular intervals throughout the game’s story. Basically, when Charlie needs to pull off some extra coercing from a witness or some other character in the game, the screen reverts to a fantasy battle setup, complete with Charlie and the person he’s talking to donning full-on medieval costumes. Players will choose one of three different dialogue options, and then tap on a section of a mighty castle wall to fire a cannon ball at it. I guess if you make the right selection, the cannon blast will do more damage and cause the castle wall to crumble more quickly. Each dialogue battle requires you to destroy a minimum amount of your opponent’s castle in order to achieve victory and continue on with the game. It’s a completely needless and un-fun feature, and it only serves to prolong the actual adventure in a clear attempt at providing some extra padding.

So even though Dream Chamber has a nice presentation, some great voice-over work, and a story that always keeps your attention at every turn, there are just too many poor inclusions (or in some cases, exclusions) that even a good night’s sleep might have trouble correcting. From sloppy animations, to the lack of an auto-save function, to unlikable characters competing in unnecessary dialogue battles, Charlie Chamber still has a long way to go before he becomes the seasoned point-and-click adventure detective that he’s always dreamed he would be: and even all of the riches in the world might not be enough to help him come to this unfortunate realization. 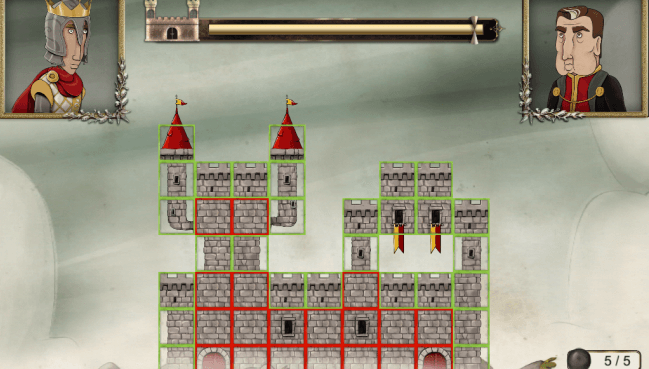