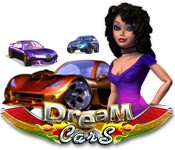 The first thing that tends to come to mind when the topic of auto shops, fancy cars, and mechanics comes up is the stereotypical image of greasy dudes in grimy overalls with their noses buried under the hood of a hot rod. The fact Dream Cars instead stars two sisters whose entrepreneurial spirit and love of fast cars, racing, and building street machines from spare parts rivals that of even the most testosterone-addled motor enthusiast is incredibly refreshing.

It’s a fun premise that’s backed by some quirky gameplay ideas. While we wish we could say the game had us from the word go, it stumbles its way across the starting line with some truly horrendous and barely intelligible text that sets a sour tone for the buggy and hard-to-manage road ahead. The introduction sequence sports a nicely crafted animated scene that awkwardly attempts to explain the story through lightning-quick transitions and some atrocious explanations.

Apparently Masha and Dasha are "sisters as long as they can remember themselves they love cars. Loved cars VERY much! Car race more than anything!" Translation: these gals are into racing. Unfortunately, their hot rod isn’t so hot, and their dreams of winning first place won’t be realized until they can build the ultimate race car. Since you need lots of cash to make turbo charged cars, they decide to start a car production and retail business. But it takes some Jedi mind tricks to glean that from the mess you’re presented with. As you’ll learn from the tutorial and beyond, it only gets worse.

Dream Cars is primarily a time management game that revolves heavily around building and selling cars while upgrading and expanding the sisters’ business. Their operation is divided into several sections. Dasha runs the customer service end of things. She greets prospective car buyers with pamphlets, takes orders, and keeps customers happy by delivering a steady supply of hot coffee, water, and other goodies. Meanwhile the mechanically-inclined Masha sticks to the back production area. She assembles cars, paints them, adds fancy accessories, and sends them out to their corresponding customer.

There’s also a third section, the outside car lot, that’s accessed by awkwardly scrolling the entire screen over to the right a bit. Here you can buy and resell random cars that are presented by salesmen, temporarily stick cars you’re working on in a spare parking space, and even let prospective customers test drive vehicles. You’ll have to purchase upgrades with cash you’ve earned in the shop first to access most of these features. Juggling between these three different areas can be fun if you’re up for a real challenge, but there are many times when it feels like the game just throws too much at you at once.

Both sisters are controlled simultaneously depending on where you click on the screen. Like with many time management games, you can queue up strings of commands for each character while waiting for them to complete their current task. Working together, you’ll help them meet their sales requirements each day in order to successfully complete each level. Some new levels are only unlocked once you’ve upgraded certain items, and you’ll also encounter sporadic racing mini-game levels that simply have you directing a car side-to-side as it races along a vertical screen to the finish line.

There are tons of upgrades to purchase in the game, which is one of the more rewarding aspects. Features and decorations can be purchased to spruce up the front customer greeting area to attract better clientele. There are other shop upgrades to help out with production, including car assembling robots, colorful tires, new paint colors, and more. Even the outside lot area can be upgraded. When the big money rolls in, you can gradually spruce up the sisters’ clunker race car piece by piece. Most of these accoutrements make your job a little easier financially, by increasing the sale price your cars will command. However, the tradeoff is they add new layers of complexity into the mix that isn’t always welcome.

Dream Cars would be a solid and reasonably enjoyable game if it weren’t such a clearly slapdash effort. The tutorials are confusing and barely understandable. Grammar syntax is thrown out the window, and there are plenty of bizarre typos. For example, "mouth" appears instead of mouse. Sound glitches appear on occasion when transitioning back and forth between the main game and test drive mini-games that make several different sets of background music play simultaneously, creating a cacophony. Though it doesn’t require a powerful computer to run on, the game also freezes and crashes during some transitions.

All of these issues make it really hard to enjoy the game. As such, I can’t recommend Dream Cars to all but the most die-hard of time management fans.