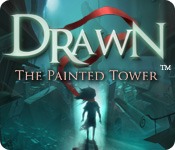 At times both morose and beautiful, Drawn: The Painted Tower unfolds like a grim fairytale set in a land devoid of all happiness. When the last bastion of hope, a special young girl with magical drawing abilities, falls in imminent peril, you must brave the dangerous, puzzle-filled magical hallways of the tower she’s imprisoned in to save her before time runs out. Very little is what it appears to be, and the further you ascend towards the dark spire the deeper you’ll be drawn into this strange, imaginative world.

Anything Iris draws comes to life, and her vivid imagination moves her to sketch and paint fantastic scenes filled with medieval realms and mythical creatures. With such a special and unique power at her disposal, there are those who would seek to capture the little girl and harness her magic for more malicious aims. It was for this reason her family sent her into exile to be safe from the malevolent forces that eventually spread darkness across the land. However, the evil king has discovered her whereabouts and is bent on her capture. You have precious little time to reach Iris and help her escape an uncertain fate. There are many challenges to face along the way.

Like so many other casual games these days, Drawn is mixture of several different genres and styles of play. It’s essentially a point-and-click adventure game at its core, though there are a lot of puzzles to solve and a strong hidden object influence that’s readily evident in the design. What makes it truly standout is the way all of these elements come together seamlessly to create a special, magical experience. The hand-drawn artwork is simply enchanting, and the gameplay weaves in and out of the beautiful design smoothly.

Many important magical artifacts and key objects are hidden around every nook and cranny in the tower’s numerous chambers. Locating these items and figuring out where they can be used will allow you to unlock the path forward and progress closer to where Iris is trapped. The interior is littered with wondrous paintings created by the girl, and locating missing pieces of the torn parchment lets you jump inside these scenes directly. Once inside, the settings come to life with small animals darting around and fantasy creatures going about their business. You’ll scour these images to find items, complete specific tasks, and provide assistance wherever possible. While that sounds rather drab and mundane, it’s anything but.

Drawn‘s puzzles are thematically integrated very closely into the many settings you’ll pore over. In one instance you might search high and low for magical chalk to draw a means of revitalizing a dying forest; in another you’ll crush rocks to create colorful dust to mix into paint that has to be applied to a giant statue. Later on, there’s a dragon that needs to be tamed by banging out a tune on gongs forged from its stolen treasure trove. There are some pure logic challenges and a few other kinds of puzzles scattered into the mix. Throughout the quest you’ll also uncover torn pages of objects and animals drawn by Iris. Using these sheets on the right spot will cause the sketches to come to life and help you tackle certain obstacles.

Getting stuck is never much of a problem, since there’s a multifaceted hint system to help you through the tougher portions of the game. Iris’ guardian, a guy named Franklin, has been turned to stone, but he can be called upon to offer hints on what must be done to progress. You can’t rely on him too frequently because he must recharge for awhile each time he’s used.

There’s a separate safeguard to keep you from getting stuck during the actual puzzles as well. Once you begin a puzzle task, a meter starts to fill up gradually. When it fills completely, you have the choice of clicking on it to solve the puzzle immediately. It’s very handy if you ever get frustrated. The downside is it makes the entire game a little too easy. You can always choose to ignore this feature. However, the temptation to rely on cheating at the first sign of a hard puzzle can be difficult to overcome. This is mainly due to the desire the game instills in you to continue exploring to see what lies ahead.

Drawn may not be the toughest adventure-oriented game out there, but it’s absolutely loaded with style and personality. This goes a long way. The magical world it pulls you into is strangely compelling, and you won’t want to leave until you’ve fully explored every inch of the tower and helped Iris escape.