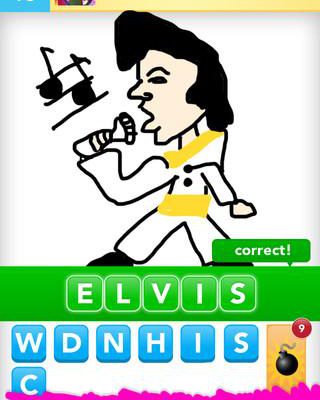 Draw Something is more than a social game, it’s a window into the minds of others

Draw Something is more than a simple Pictionary clone. While it stems off the same concept that has been used over and over, there are no time limits and no punishments for incorrect guesses. These aspects, along with the one-on-one setting, remove any sense of competition from the game. The resulting experience is less a game, and more an insight into individual personalities.

I met Mr. Frost in one of my first matches. Over the next few days, we played when we had time. We’re about 50 rounds in so far, and we haven’t missed a word yet. Our pictures started as silly little sketches consisting of only black and primary colors and evolved into vivid scenes and occasionally hilarious situations. I didn’t just get to sit back and watch my own ability grow—my artistic ability has indeed grown, at least by Draw Something standards—I also got to watch someone else grow alongside me.

We both started off with the same crude style, but as we played, those styles grew apart. I’ve found I use a lot of color to illustrate my words, while Mr. Frost puts more emphasis on detail. Neither is better than the other, but it leads to completely different drawings for the exact same word. For “EMINEM”, I’d draw a bunch of candies, while Mr. Frost would likely try drawing the rapper himself.

Mr. Frost and I have learned a lot about each other through the way we play the game. I’ve never met the guy, but based solely on word selection and the guesses we make, I can’t help but think we’d get along in real life. When it’s your turn to draw, you get the choice between three words Each one is more difficult than the last, but also nets you more coins if your partner guesses it. Mr. Frost and I seem to move straight toward any video game-based word we come across. And if we’re stumped, we both often make guesses about the video game universe. Even when those guesses are wrong, we just rearrange the letter bank until we find a suitable word that fits the allocated space. Mr. Frost and I think alike, and our synergy has grown as we’ve played the game.

My experience from Mr. Frost came from a random pairing. You can choose to play with friends, and that’s a completely different experience. When I linked my Facebook account and created a new game, I was able to see which of my friends were already playing, and I was given the option to invite others. As new friends picked up the game, I got to see shades of my past. While I’ve earned enough in-game coins to unlock various colors and shades, my friends were stuck with the same four options I had at first. Without saying (or writing) a word, I was able to show them some of the tricks I’ve learned, and they – perhaps inadvertently – showed me some new things. 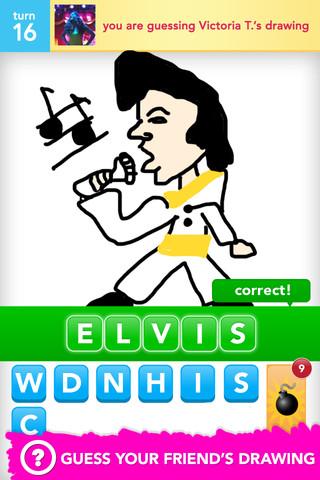 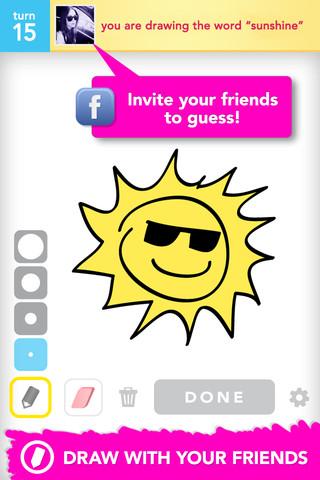 Linking your Facebook account isn’t the only way to play. You can use email or a username to find people you know too. You can play a bunch of games at the same time, and you’ll want to, because your bank fills with coins each time you get a word correct. These coins can be used to purchase more colors or buy bombs that eliminate incorrect letters from the letter bank. The bombs are nice, but I only found good use for them when my partner really struggled with the drawing. On the other hand, colors enrich the experience, but you’ll find a lot of creativity from those who have only the default choices.

There’s both a free and a paid version of the game. Both versions allow play between iOS and Android users, and they both play identically. The paid version eliminates ads, adds about 2,000 more words, and gives you 400 free coins (you can also opt to buy coins separately if you’d rather not wait to earn them). Those who play a lot may want to put down money for the paid version, as there are only so many times you can stand having to draw Shrek.

Draw Something is neither a challenge nor a competition. It’s a social game in its purest form. Whether you’re playing a close friend or a complete stranger, you learn about who they are. How somebody approaches Draw Something tells a lot about them. Perhaps they have an eye for detail, maybe they enjoy a good joke, or maybe they play in a way that’s completely unique. There are some bad eggs that try to earn a quick coin by simply writing their word. Like the rest, that action alone gives us an insight as to what kind of person we’re playing with.

The lack of competition and challenge will understandably be a turnoff to many. The rest will discover pure, innocent fun, and an amazing window into the minds of others.