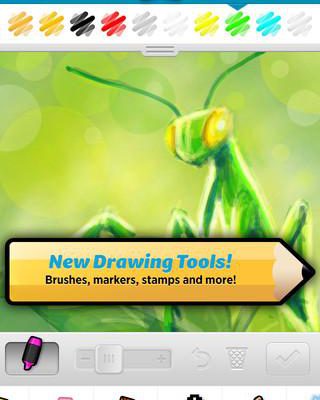 I’ll admit I wasn’t really expecting much when I first heard that Zynga was coming out with a sequel to their smash mobile phenomenon Draw Something, the hugely accessible turn-based Pictionary game. I mean, besides adding more words, what else could they possibly do to repackage the same simple idea? Well it really shows how much that I know, because not only does Draw Something 2 come equipped with an impressive 5,000 new words, but it also introduces so many fresh and exciting new features that I’ve never seen a social game so fitting to earn that rightful sequel designation.

The first thing you’ll notice right away about Draw Something 2 is the game’s extreme likeness to a mobile social app: so much so, that the main interface and home screen actually looks like a Facebook newsfeed, only with drawings instead of status updates. Here you can scroll through all the latest drawings that were made by your friends, participate in Daily Draw and Daily Guess challenges for some bonus coin rewards, and even follow your favorite Draw Something artists in the same way you would follow them on Twitter. The game also advertises interaction with famous people and celebrities on your digital easel, but I have yet to join an actual game with the likes of will.i.am or Carly Rae Jepsen. It may take a few minutes to figure out how to navigate through all of the shiny new features, but once you do, it’ll be hard to go back to the original Draw Something, which just seems so underwhelming now in comparison.

The interface isn’t the only thing that was given a massive facelift in the sequel. In addition to an enormous palette of different colors, which you can now purchase in individual shades or the traditional color packs, Draw Something 2 also features a number of fun new drawing tools to get even more creative with. These tools run the gamut from pattern pencils, which let you shade in your drawings with zebra and camouflage patterns, to pixel pencils, which you can use to create an 8-bit masterpiece in the vein of your favorite NES games. But wait that’s not even all! You also have a highlighter to layer your colors with cool transparent effects, a watercolor brush for amazing depth and shading, and even a sparkle pen, to give your latest drawing a bit of extra glittery flair. This game seems to have thought of everything, and every new feature is wonderfully utilized, and a total joy to see in action or draw around with on your own. And if you’re trying to draw the next Mona Lisa here, the game even lets you zoom in and out on the screen as you’re drawing to make sure you get every last one of those intricate details. 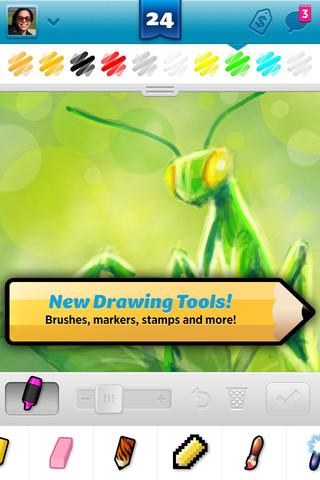 Even though the first Draw Something game successfully took the mobile world by storm, there were still a handful of missing features that many fans had begged to be included. And boy did Zynga listen to everyone’s suggestions this time around. The most desired new feature in the sequel is that now Draw Something 2 will save all of your drawings in a personal gallery, which you can use to brag or share with your friends, and vice versa. Clicking on someone’s drawing that pops up on your newsfeed will let you watch them recreate the drawing as you’d see in the main game, which is another real shining and interactive touch (my hat goes off to whoever made that incredible pixelated drawing of Gomez from Polytron’s Fez).

You can also “Like” other users’ artwork and comment on them as you would on any Facebook post, and keeping up with the whole social platform theme, you can even start real-time chats with your opponents while you play. The core play-at-your-own-pace style of gameplay remains largely intact, but you are rewarded twice as many coins now for each successful drawing and guess. If you don’t like the words you’ve been given, you can simply swipe the screen to the left and right to pick from some other word categories, like “Country Music” and “Video Games,” which you can open up for a small fee of star currency. You even have the option of recycling one of the drawings you have saved in your gallery, if you’re really proud of your latest Picasso and want to show it off just a little bit more. 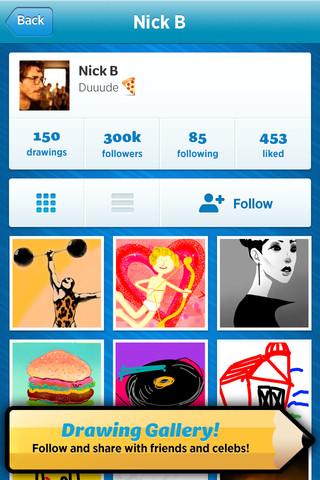 The only real big setback to the game that I can think of is that some of the nicer features like the different texture pencils and crayons are a tad bit expensive to unlock, and it’s going to take a whole lot of drawings to earn them through regular gameplay. But the stark difference here from other freemium games is that everything you can buy in the Draw Something 2 store feels entirely worth the in-app purchase. And of course, as with any social media platform, the experience is only as good as how sociable you are, so if you’re the kind of person who only has 3 Facebook friends like my mom, then you might not get to appreciate the full connected potential of Draw Something 2. You’re also required to create an account using your email or Facebook profile to even get started, which might be off-putting to some who just want to play the game.

So grab your new sparkle pen, Draw Something fans, and welcome to the next milestone in casual social gaming. The sequel is fun, inventive, and comes with an unlimited potential to capture your true artistic visions. While I may never be able to reach the heightened drawing skills as some of the people I follow, I’m still having a total blast trying. It’s going to be a little weird going back to Facebook though after this, because now that I’ve had the very impressive Draw Something 2 experience, my boring old newsfeed is just going to pale in comparison without all those awesome drawings covering my wall.