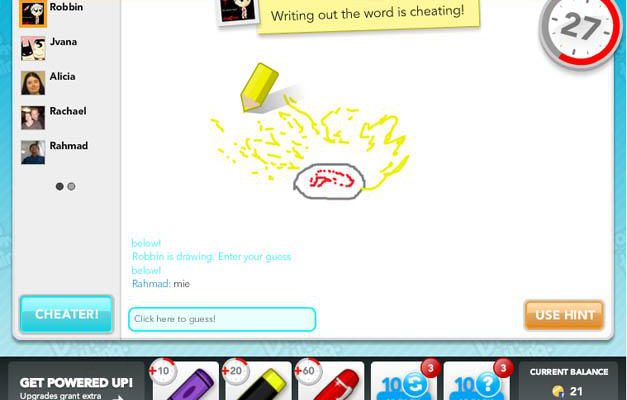 Draw My Thing is basically an Internet version of the classic party game Pictionary. Players gather together in a chatroom-like environment, with one player given 60 seconds to draw a picture that evokes a keyword. Other players who guess the word gain points, while the artist gains points for drawing a guessable picture without cheating and just writing the word down. After everyone draws one or two pictures, depending on total number of players, the points are totaled up and a winner is declared. You get the option to share your (often hilariously bad) artwork with your friends if you like.

This is not a new game, though it’s not a clone, either. Draw My Thing has been available for years on developer OMGPOP’s self-titled game portal. OMGPOP’s portal only serves about eight million active monthly users who have dozens of games to choose from. Draw My Thing on Facebook already serves 1.8 million monthly active users. Where games on the portal rarely drew more than two players, Facebook sessions often draw the full seven players the client can support. A good session of Draw My Thing has the same entertainment value as a good game of Pictionary, really. You’ll laugh at the silly drawings and get absorbed trying to guess a tough one first. 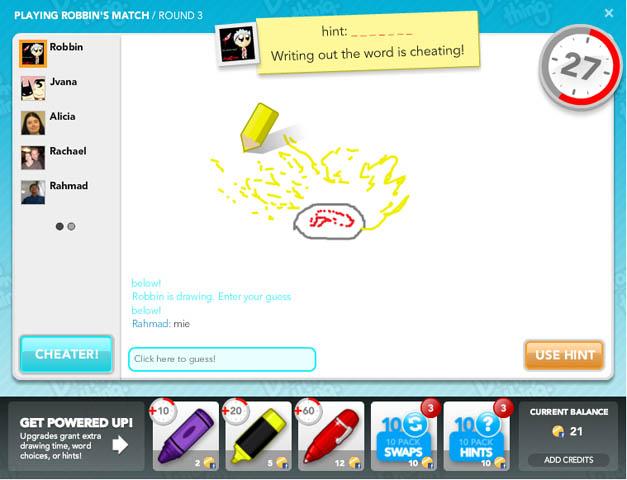 The big problem inherent with Draw My Thing as a game is cheating. Most games will include at least one player who gets frustrated and decides to cheat by simply writing the word you need to guess. Many games will include several players who behave like this, so good luck getting anyone to verify your cheating reports. Draw My Thing becomes instantly unfun once someone is cheating and other players choose to enable it. While everyone gets lots of points, there’s no more actual drawing and the entire exercise becomes pointless.

The rampant cheating is a shame, because otherwise Draw My Thing is elegantly implemented. While the process of finding an open game can take a few minutes, once you’re in a game lag is rare. The pencil tool you use for drawing is responsive and typically lets you draw exactly what you want without input issues ruining your efforts. You’re allowed to draw in several colors and with different line widths from the beginning. You can unlock more advanced art tools as you play more games, or simply buy super-pens and markers tools for Facebook Credits. These power-ups aren’t disruptive to the game at all, especially given its cheating problem. 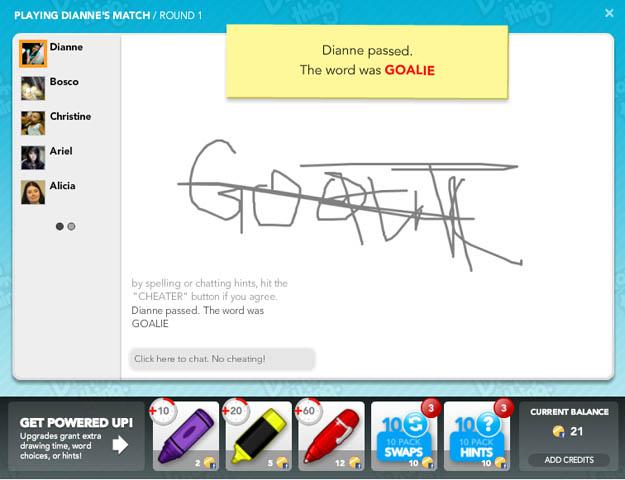 There aren’t nearly enough games on Facebook that let you interact with others in real time. A good group of players in Draw My Thing tends to result in a lot of chatting, Internet laughing, and in all a pretty good time. If Draw My Thing could do something to clamp down on the cheating, it would be one of the best games to play with your friends on Facebook. The cheating problem means that you have to spend a lot of time bouncing from game to game until you find a good one, which eats up a lot of time and gives your attention time to wander.