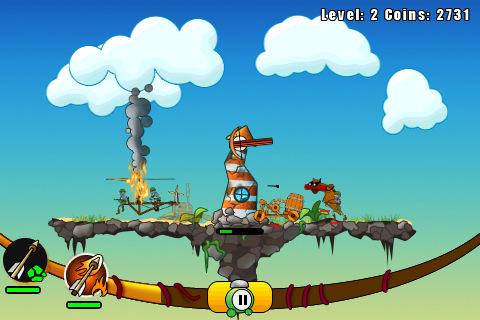 Drake’s Tower proves that nothing says “Get Off My Lawn!” like a giant flaming arrow aimed at somebody’s head

When you’re a crazy inventor who’s reached his twilight years, what do you do with all your free time? The answer, apparently, is to take a note from Clint Eastwood: hole up in a lighthouse-like tower, mount a giant crossbow on the top, and shoot anyone who comes near your front door. Nothing says “Get Off My Lawn!” like a giant flaming arrow aimed at somebody’s head.

The basic story, which is told via a text screen at the beginning of the game, is that Drake is a kooky old inventor who creates marvellous devices out of whatever he finds. An evil mad scientist (side note: I would really love to see a game where the mad scientist isn’t the villain) wants to take Drake’s inventions and use them for vile purposes, so he sends armies of UFOs, zombies, and strange siege engines to topple Drake’s crooked tower and steal his wonderful toys.

This is a “tap defense” game, meaning that players have to defend the titular tower in the middle of the screen by tapping on the advancing enemies. At the bottom of the screen, overlaid by the six buttons used to select different types of ammo/abilities, there is a time bar that gradually fills. When the bar has completely been filled the level is over, and players can upgrade their ammunition and special abilities between stages.

Different enemies are vulnerable to different types of ammunition, both of which are unlocked as one progresses through the game. Case in point: Hemlock Tankers (wooden catapults) are vulnerable to fire damage, while Steam Tanks (metal catapults) can be taken down with only a couple of shots with heavy ammunition. A really nice touch is that a level’s weather can affect ammunition effects, such as rain extinguishing fires started by the flaming arrow.

These changing vulnerabilities provide the game’s main challenge. There will often be multiple enemy types on the screen at the same time, and knowing which ammunition will take them out the fastest becomes increasingly crucial for survival. Even the game’s Easy Mode becomes challenging fairly quickly. 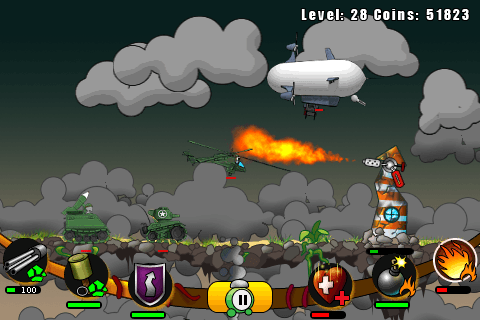 The visual style is cute and cartoony, featuring bright colors and clean, sharp, lines. Drake’s tower is a vibrant, crooked, strange, goofy-looking thing, and all of the unit designs seem to be gleefully bizarre. That said, it’s hard to make out any real detail in the game because there’s no option to zoom in or out. The music is cute, but there’s currently no option to play one’s own music library instead, which is a pretty common feature in iPhone games these days.

“Cute” is the best word to describe Drake’s Tower. It’s got a bit of style, is enjoyable enough, and contains sufficient depth to keep players engaged for a little while. That said, this is also the sort of game with enough sameness that the moment someone stops playing it, it’s doubtful that they’ll give it a second thought.