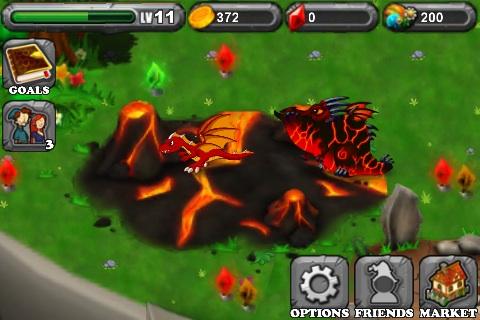 Jurassic Park was cool, but really it doesn’t have anything on DragonVale, a game where you manage a zoo located on a floating island that’s home to all manner of dragon. Everything from the traditional fire breathing breeds to those that can spew lightning or that live in frigid climates. You hatch them, nurture them, and breed them. The game is actually relatively simple, but the satisfaction of raising a giant, menacing dragon is no less because of it.

So the game takes place on a floating island — or islands, eventually, as you’ll be able to purchase more to make more space for, what else, more dragons — and visitors will teleport in thanks to some sort of magic that’s never really explained. But that’s OK. Because even though DragonVale is technically about managing a zoo-like business centred around dragons, it’s not really a management sim. You may be buying decorations and collecting money, but your focus, rightfully so, is on the dragons.

There are many different types of the mythical beasts, each of which falls into a particular category based on a traditional element like fire, ice, or earth. You’ll need to build habitats to house them, and by growing treats and feeding them to your dragons you’ll be able to nurture them from juvenile fire-breathers all the way up to full-grown adults.

Because there are so many types which change in appearance as they age, there’s a sort of Pokemon-like collect ’em all mentality in the game. Having each type of dragon is a large part of the draw. You can buy eggs, of course, though a large percentage require gems, which are the premium currency in the game. This is a good option for those willing to spend some money (though some of the dragons seem top be ridiculously overpriced), but if you have a bit of patience you can also breed the beasts. This can takes many hours, as you’ll both have to wait for two dragons to breed as well as for the subsequent egg to hatch, but there’s also a hint of mystery to the experience, as you’re never quite sure what kind of baby dragon will emerge from the egg. 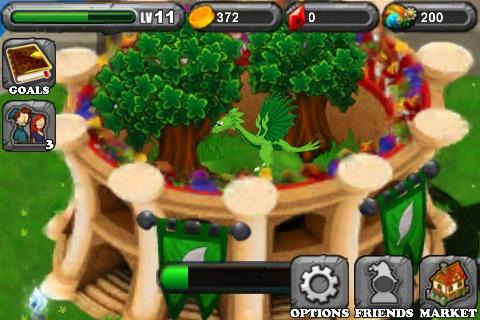 Since collecting the dragons is a large part of the appeal, it’s a good thing they themselves are appealing. The creature designs are varied and unique, with everything from big, fat dragons with preposterously tiny wings to dragons with heads that look like flowers. There’s something for everyone, and they all look great. Clearly a lot of attention went into the monsters (even their descriptions are charming and often funny), and it shows not only because of how great they look, but because of how much better they look than the rest of the game. The visitors to your dragon zoo are blurry and indistinct, while the decorations are bland and uninteresting.

But those aspects are really just window dressing and as such are easily ignored. DragonVale is a game about raising and collecting a huge number of different types of dragons, and in that it succeeds. Where you like your dragons cute and cuddly or large and ferocious, DragonVale has something to offer.