Home / Reviews / Dragons of Atlantis: Heirs of the Dragon Review 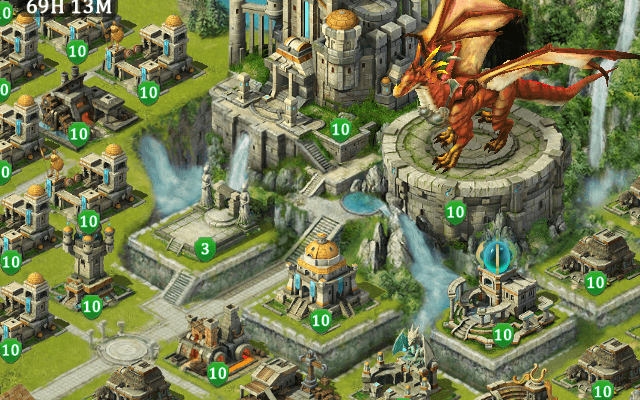 A significant improvement over its browser counterpart

A well-known Portlandia skit features two goofballs who maintain that everything’s better if you merely “put a bird on it.” With Dragons of Atlantis: Heirs of the Dragon, Kabam seems to think that you can improve the tired social combo of city building and abstract strategic warfare by putting a dragon on it. In some ways, it works, if only because it’s fun to watch a dragon spreading its wings on your screen, rather than contemplating a static representation of a city. Looking for something more innovative, though? You won’t find it here.

You might recall that we reviewed Dragons of Atlantis in the past, and we weren’t too enthralled with it then. Happily, Kabam’s taken several steps to avoid the same mistakes. For one, there’s no more need to rely on one of four factions for progression. Not that they really mattered anyway aside from cosmetic preferences (which might come as a bummer to players who preferred that option); you were still allowed to let Amazons mingle with your Mesoamerican-themed Zolmecs for the sake of the all-important player alliances. Gone, too, is the need to wait ages to even see a dragon egg hatch; in the mobile version, your dragon pops out but moments into the tutorial. This is big, and possibly enough to prompt many players to ditch the browser version in favor of the mobile. 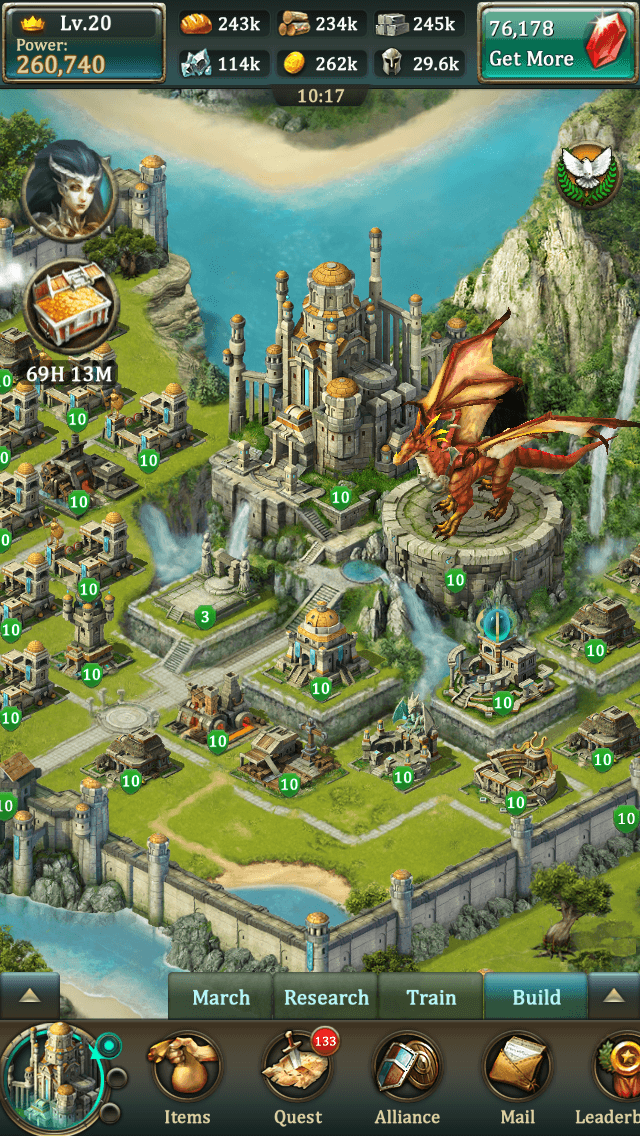 All this means that the iOS version of Dragons of Atlantis doesn’t share the same servers as the browser-based versions out of necessity, and based on our couple of hours with the live version, that’s been a welcome move on the part of veteran players since it allows for new blood and a chance to remedy decisions that went sour with the first go-round.

But make no mistake: the dragon remains the key draw here. Dragons of Atlantis features a mode where you can zoom in on your Pentagon-sized flying lizard and teach it some tricks such as how to breathe fire and roar, but it makes little difference as to how you use it in combat. And combat and city building are where you’ll find that despite the welcome iOS streamlining for Kabam’s popular title, Dragons of Atlantis still doesn’t play much differently that Kabam’s massive stable of social strategy games, including hits like The Hobbit Kingdoms of Middle Earth and Kingdoms of Camelot. Indeed, aside from welcome quick cutscenes, it still largely rests on abstraction on the world map. 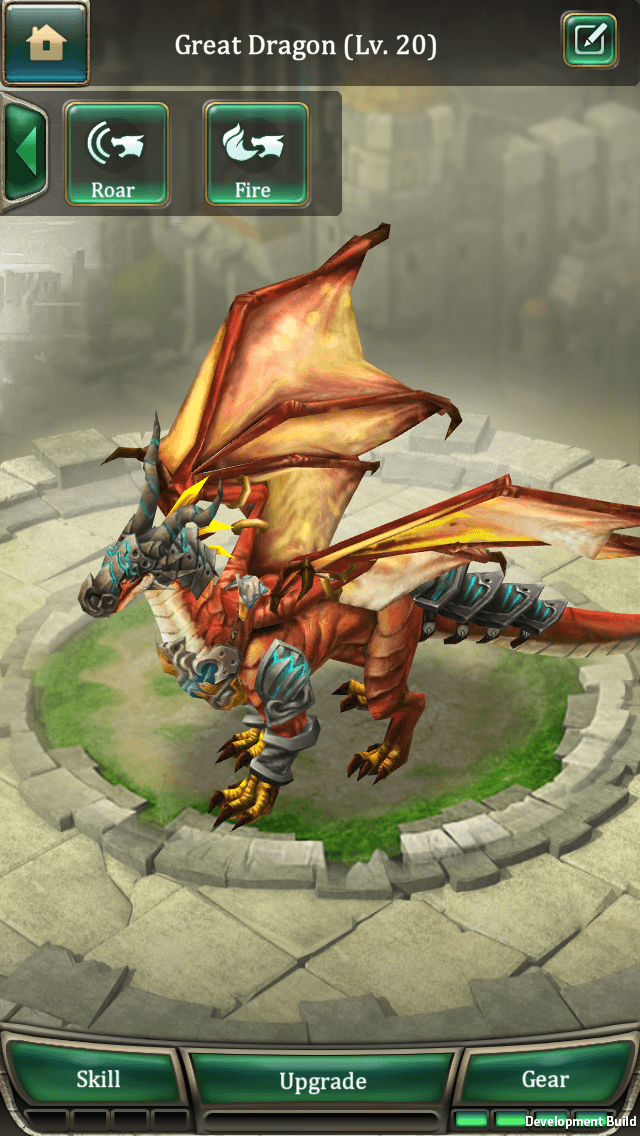 Much as in many other Kabam strategy games, then, you’ll spend much of your time performing the same dance of building houses, training troops, and gathering resources in the form of metal, wood, stone, and gold, and using those resources toward the construction of better sites to strengthen your army. That’s not necessarily a bad thing as Kabam undeniably has the formula down pat, but it means that you won’t find much to keep your attention here if you’re tired of the same routine and you’re not enamored with the thought of owning a dragon. As before, alliances can speed this process of development along, particularly in the weeklong waiting period you get before you’re open to attack.

As an additional benefit, Kabam seems to have taken to heart the criticisms that the original game was too slow – our original reviewer lamented that he’d seen few changes to the city and the dragon within the space of a week – and in the mobile version, buildings, troops, and even your dragon appear to develop at an agreeable pace. That’s not to say that some of the original speed bumps haven’t stuck around; you can still only build one structure at a time, for instance, which slows down progression considerably at higher levels without the help of the premium currency. 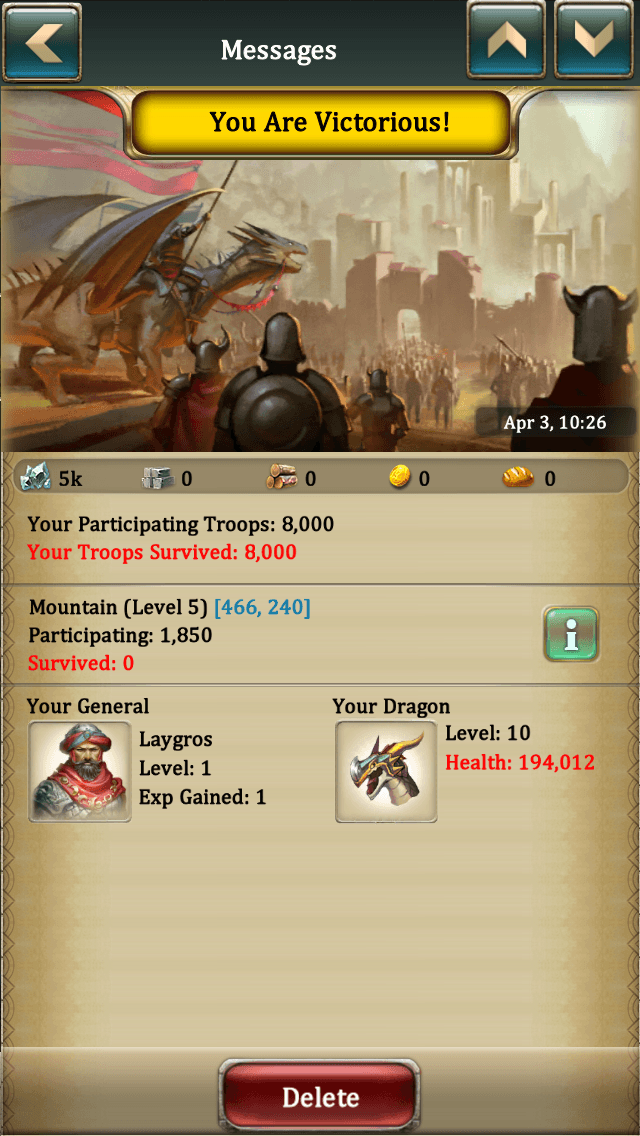 Dragons of Atlantis for mobile thus marks an improvement over the first incarnation of the game, but it doesn’t necessarily mark an improvement on the conventions of the city building/strategy genre as a whole. Still, if there’s one undeniable pleasure that it delivers, it’s that clicking on an enemy player city only to see a gargantuan mature dragon staring back at you gives you a much better idea of what you’ll be up against when deciding on what cities to attack. In many cases, you’ll find that makes you realize you don’t want any of that.