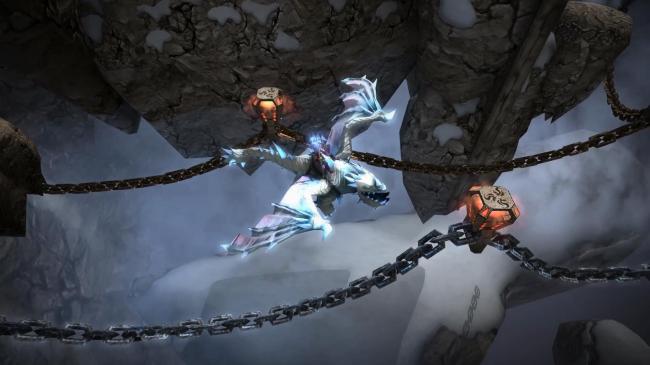 What better way to settle an argument than with a 5v5 dragon battle?

Solitary grumps like Smaug notwithstanding, dragons are team players. If they weren’t, there’s no way they’d let you and four other players ride them in Dragons and Titans, a MOBA from Wyrmbyte and Zynga that you can play for free on Facebook. And since the other side of every five-on-five clash has scaly mounts of its own, that’s 10 dragons per battle. See? Team players.

Maybe it’s the presence of the titans that is making the dragons so cooperative. The backstory isn’t of primary importance here, but suffice it to say, it focuses on two warring factions who settle their differences in 5v5 combat. Humans ride the dragons into the fray, with each side attempting to weave its way through flying islands and free its titan from imprisonment deep behind enemy lines.

If you’ve played League of Legends or any of its ilk before, then you’ll recognize many of the concepts right away, and the solo training modes can help if you don’t. This is a proper MOBA with axiomatically spawning AI minions, automated defenses that need to be dealt with, and the ability to level up your character during battle. There’s currently only a single map, but that makes it a little easier for newcomers to get the lay of the (floating) land.

The ebb and flow between offense and defense is an interesting one, and the game emphasizes the importance of teamwork. Several structures have to be dealt with in order, before your team can make a direct assault on the cage that imprisons your titan. The other side is trying to do the same thing at the same time, and the endgame race can get pretty exciting.

Aside from the aerial setting, one thing that sets Dragons and Titans apart from the ever growing MOBA crowd is the way each player can choose a combination of dragons, weapons and spells before each match to suit his or her play style. You can go for a synergistic approach, focusing on all offense for instance, or use the weapons and spells to cover for weaknesses in your dragon’s set of abilities. 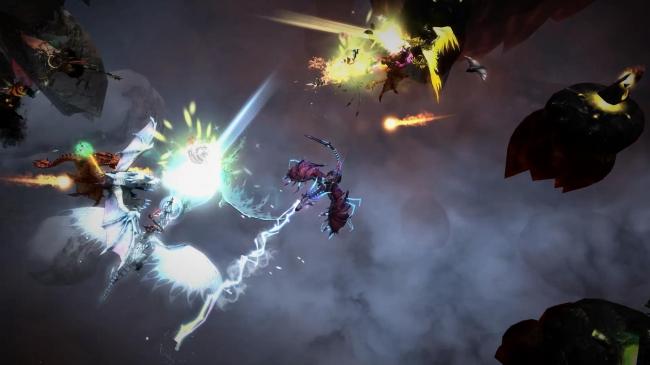 Every dragon starts with a breath weapon of some sort, and its other abilities can be brought online as you level up by defeating enemy minions or dragons. Gold dropped by defeated foes can help speed the process if you bring it back to a Hoard on your side of the map. Abilities and spells are mapped to specific keys, and while it’s possible to control movement and basic attacks with the keyboard as well, a mouse feels like an even better way to go.

Win or lose, you’ll receive crystals at the end of each match that can be spent in the store to buy more dragons and weapons, as well as alternate skins for the dragons you’ve already purchased. Buying a dragon unlocks its use permanently, with the others going into a free rotation so that everyone has a few to choose from at all times. There’s a hard currency called Dragon Bucks that has more buying power and is slowly attainable in-game but primarily there for real money purchases.

A mastery system rewards you for specialization (or just a lot of repeated play), by making your dragon fly faster and deal more damage, or reducing the cooldown for your weapon’s abilities. Runes are the other means of overall advancement, granting you bonuses that you can assign to slots that unlock as your rider levels up. It’s an interesting idea that promises even more flexibility to the way you ride into battle, but since the runes come in random three-packs – like the video game equivalent of blind boxed toys – there’s a bit too much chance involved for my liking. 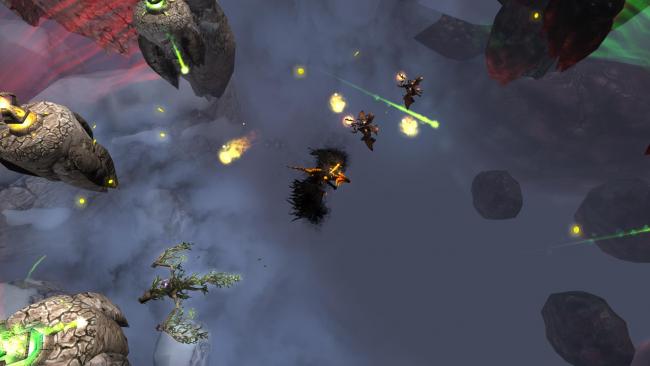 One thing I did appreciate was the option of playing solo or co-op matches against bot opponents, reducing the intimidation factor and letting newbies ease into ranked matches with full human teams on both sides. There’s also a feedback system for giving props to especially helpful or sportsmanlike players. The only social aspect that seems forced is the use of Battle Marks to limit play (you get five, and they refill at the rate of one every four hours) unless you ask for them from friends. Yes, it’s a game you play through Facebook, but that doesn’t mean it has to act like a “Facebook game.”

Dragons and Titans does rise above its platform in the visuals department, as the aerial warfare is both striking and smoothly animated. The designers did a nice job of visualizing a creative array of dragons, and there are several graphics settings to help achieve the proper performance/detail balance. There are short download times necessary between matches, though nothing too ridiculous with all things considered.

Wyrmbyte did a commendable job walking the line between accessibility and serious gamer cred with Dragons and Titans; a feat which isn’t easy to do. All that’s left to see is if enough players agree, as a MOBA is ultimately only as good as its community. If you’re thinking about joining in, just remember, the dragons are there to help. Honest.