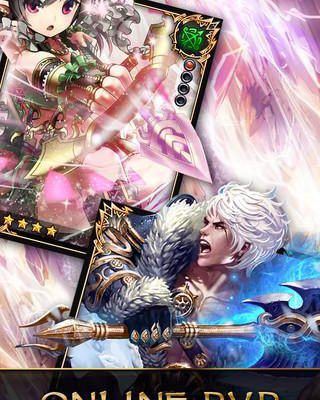 Another day, another dragon-battling card game

Dragon Summoner is another addition to the very crowded collectible card battle game genre. It hits all the same notes, offers up all the same kind of “gameplay” with all the same kind of illustrations, telling an epic tale of a land threatened by something or other that can only be saved by your valiant efforts, guided by a buxom and very powerful assistant who nonetheless can’t seem to handle this situation on her own. It’s not bad in the strictest sense, but it’s the same old thing we’ve seen many times before.

All was well in the land of Ouvien, until the day some jerk known only as the Dragon Summoner summoned a dragon – hence the name, I suppose – and everything went to pieces. Now the long-extinct race of dragons has risen again and the three kingdoms must yadda yadda, kill things, collect cards, enhance, evolve, wash, rinse and repeat. Even if you’re knew to the CCG genre (or TCG – trading card game – as some call it), the setup in Dragon Summoner is so slight that it’s hardly even worth mentioning. The truth is, it’s irrelevant; you’re here to poke at the screen in an effort to collect virtual cards and upgrade the good ones so you can impress all your friends, or at least all the strangers on the internet who are playing the same game. There’s really no need to belabor your motivations.

And in its base purpose, Dragon Summoner is quite adequate. Quests form the most basic element of gameplay, in which you tap the “go” button on the screen to kill monsters and advance sequentially through a series of steps that ultimately lead you to a boss battle. Every so often, a treasure chest falls from the sky, rewarding you with a fragment of a treasure or a new card for your deck, and once in awhile you’ll run into a “Raid Boss,” which makes things marginally more interesting because of the great likelihood that you’ll lose your battle against it.

You can increase your odds by arranging the cards in your deck in layouts known as “formations” that boost attack, defense or hit point bonuses in battle. Enemies also have a weakness against specific character classes – warrior, mage and hunter – so if you can stack a custom deck composed of cards of the appropriate class against them, you’ll have a much easier time of things. If you find yourself unable to defeat a Raid Boss, you can seek help from other players, or you can choose to simply bypass it and continue with your quest. 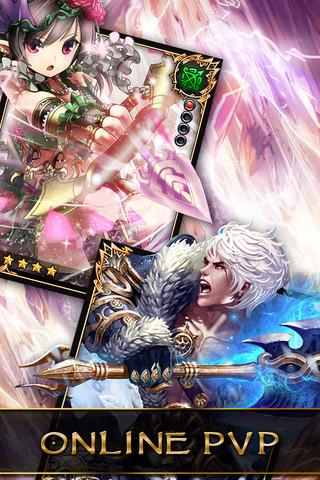 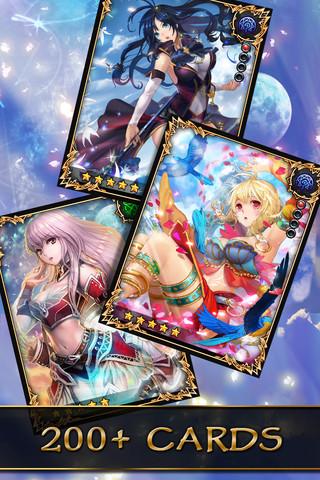 Cards come in a range of rarities, from “normal” to “SSR” (Super Super Rare, I guess?), and once you’ve got a few of them under your belt, you’ll want to enhance and evolve them to improve their abilities. Enhancing uses (generally) lower-grade cards to boost the level of a single, (generally) higher-grade card, while evolving takes two cards of the same type and combines them to create a more advanced version. You can hold as many as 70 cards at once when you first start playing, but while having lots of cards is nice, owning powerful, high-rarity cards is really the goal.

Friendships can be formed with other players, which will make life easier when you’re questing, but you’ll probably spend more time battling them for treasure. Dragon Summoner features a number of fragmented treasures, some of which you can pick up on your travels, but if you want to collect them all – and you do – you’re going to have to fight your fellow players for them. They will of course be doing the same thing to you, so show no mercy.

Dragon Summoner does a few things differently than other games in the genre, although none of it is particularly revolutionary. Formations are a potentially interesting twist, although their actual impact on boss battles, at least at low levels, seems somewhat dubious, and the quest battles unfold from a side-by-side view of your forces against enemy monsters, rather than the usual pseudo-3D head-on view. The visuals are very similar to those of its most obvious competitor, the juggernaut Rage of Bahamut (which is to say quite good, although perhaps a little more manga-like), but there’s no sound at all, and its response time to screen taps seems a bit sluggish. 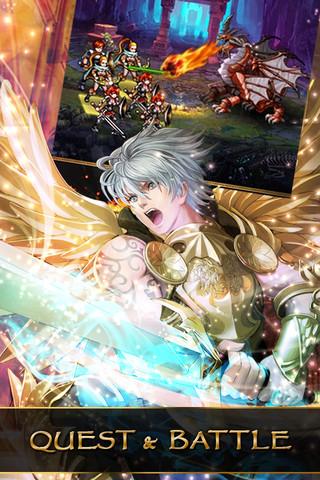 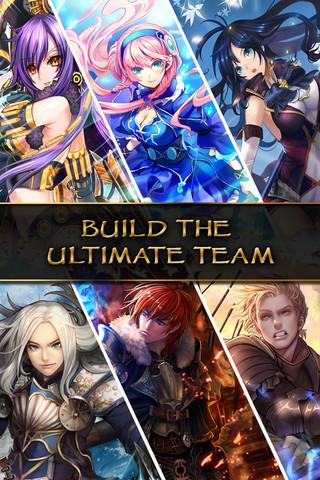 On a personal level, I find it interesting that the option to make real-money purchases of card packs, which you will almost certainly end up taking advantage of if you want to acquire seriously high-level cards, is labeled “Gacha.”  This is the Japanese term for the mechanic in which players spend a small amount of money for a randomized item or, in this case, virtual trading cards. The term has taken on a somewhat negative connotation in recent times; in May 2012, both Gree and DeNA agreed to impose limits on gacha in their mobile games because of the large number of people blowing ridiculous amounts of money on them, which had gotten so far out of control that the Japanese government was considering a legislative crackdown.

In the end, the bottom-line gameplay is the same old thing – tap the screen when it tells you, indulge your compulsion to collect; there’s really nothing to recommend Dragon Summoner over all the other CCG battle games on the market. It’s free-to-play so there’s no reason not to give it a spin if you’re new to the genre and interested in checking it out, but if you’ve already tried Rage of Bahamut (or Deity Wars, or Pantheon the Legends, or the licensed Transformers and Marvel games) and found them wanting – or are still playing them – then there’s really not much point in bothering with it.

Towelfight 2: The Monocle of Destiny Review