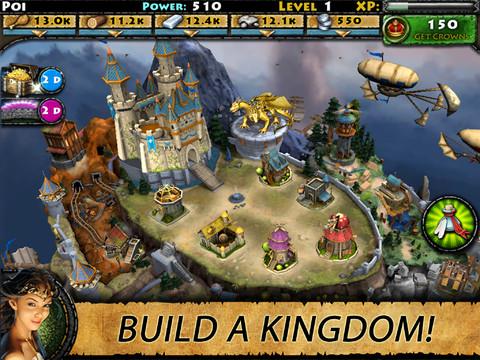 Sunny with a chance of dragons

A literal storm of dragons would be pretty dangerous. So we’re lucky there isn’t such a thing, even if the graphics that meteorologists would use to depict it in the 10-day forecast would be pretty cool. The iOS game Dragon Storm, conversely, is a real thing, made by Griptonite and Glu Games as a multiplayer fantasy builder and battle game. It also looks pretty cool, but the gameplay doesn’t live up to the high bar set by its visuals.

Dragon Storm starts off promisingly enough. Humans have barely survived the initial assault of a dragon named Shadowclaw (like I said, dangerous), but only by taking to the skies in city-size airships. As luck would have it, these ships make the perfect platforms for raising armies to take back the land from Shadowclaw’s winged forces, especially since the last dragon eggs are on board.

The initial gameplay loop should be easy to grasp for anyone who’s ever played a builder of any sort. Building an army takes resources, specifically food, wood, stone, and metal. There’s a specific structure for each resource, and the spots for every structure are already plotted out for you on your airship. Somewhat confusingly, you can also build multiple structures of one type (five Forests, for instance), but only one will show up on your ship’s map.

Resources build up solely over time, and the structures can be upgraded to speed up the process. There are also sub-buildings – like the Smelter for the Mine – that can be set to produce extra resources over predetermined amounts of time. And since it’s not all about resources, you’ll also need a Wizard to research new technologies, a House to tax for silver, a Training ground to, well, train troops, and more.

The trouble is twofold: You have lots to build and can only construct or upgrade one structure at a time, plus there never seems to be enough silver. Quests can help with that second part, and you do get seven days of immunity from other players’ attacks, but it’s tedious to get your airship up to speed in all areas. 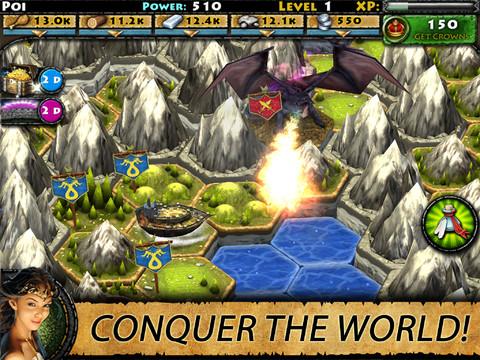 At least once you have some troops on hand, you can send them off to battle in the game’s campaign mode. Each hex-based map has specific goals you have to accomplish, like capturing a certain number of tiles or defeating one of Shadowclaw’s dragons. There isn’t much strategy to sink your teeth into, though. You get an idea of what kind of resistance you’ll be facing, choose up to three kinds of troops to send into battle, then wait as they march off and again as they return (with spoils if they won).

Considering it’s one of the features that ‘s supposed to set Dragon Storm apart from similar games like The Hobbit: Kingdoms of Middle Earth, it’s a letdown to see the single player campaign so sparse and so poorly explained. The only interesting part is the option to raise one of several different kinds of dragons to send out as part of your army, but even that requires you to upgrade the dragon’s lair to at least level 3.

There are also opportunities for players to band together in alliances for PvP combat against other players. Support for this mode is pretty decent since each alliance gets its own dedicated chat channel, and there’s a little bit more thought that goes into the balance of troops needed to defeat human opponents. Fending off attacks depends on the forces you’ve assigned to your Keep, and if the invaders win, they’ll make off with any resources not kept safe by your Vault. 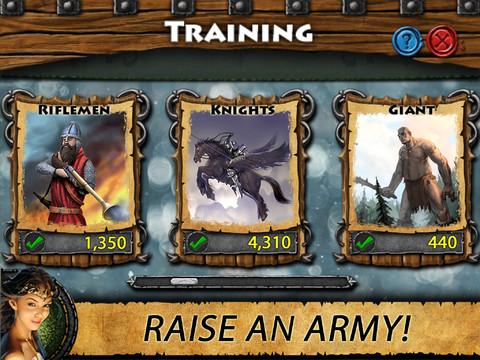 As games of this type mature, joining an alliance ends up becoming pretty much essential to avoid being farmed by more powerful players. With every action constrained by time, there’s also a big temptation to spend money on Crowns, the game’s premium currency, to speed things up. No doubt this is exactly what the developers intended, but it causes the dreaded “pay to win” specter to hover over everything. You’d need a ridiculous amount of patience and an equal amount of luck to make much progress without paying, finding strong allies, or both.

One big positive Dragon Storm has going for it is its visual style and sharp graphics. Appropriately, the dragons are the stars, shifting around and occasionally taking to the skies while you’re taking care of business at your base. Everything is crisply animated, and the female guide who pops up to advise you on quests or to tell you that you’ve leveled up isn’t bad to look at either.

Is that enough to make up for what seems to be a long grind to get to anything really fun? There certainly seems to be an audience for this type of game, but you’ll have to be drawn in by the atmosphere of Dragon Storm and be prepared to be social if you really want to be part of it.