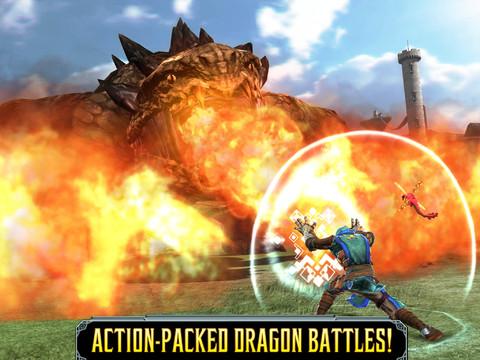 It’s not the most original game, but there’s still plenty to like about Dragon Slayer.

If imitation really is the sincerest form of flattery, the people who made Infinity Blade must be absolutely blushing by now. Developers just can’t wean themselves off of those tried-and-true game mechanics for mobile action games, so it should come as no surprise that Glu Mobile’s Dragon Slayer continues in that vein. It does carve itself out a unique niche in terms of setting and visuals, but is that enough for iOS and Android gamers?

The back-story for Dragon Slayer really isn’t that important. All you need to know is that your character, who looks a bit like a cross between a ninja and a mage, has a whole bunch of dragons to kill in order to stop corruption from spreading across the land. Dragons have a tendency to do that if left unchecked.

You have to admire the cojones of a guy who’s going to be facing down dragons all by himself, and you’ll have even more respect for your character once you actually see these beasts. Glu came up with a number of different looks for the dragons, from your standard winged fire-breathers to lizards who get more down and dirty at ground level. The bosses at the end of each level are truly gigantic, and it’s clear a lot of love went into designing the way they look and move.

That second part is important, because again, this is gameplay you’ve likely encountered before. The dragons come at you with their own unique attack patterns, forcing you to time your dodges or use one of your limited number of blocks (though your shield does recharge slowly) to avoid damage. Avoiding the last attack in a sequence stuns the dragon for you to go to work on offense by swiping like mad – hurling spells, since your character isn’t a melee combatant – though you can land some lesser shots at any time. That plus the lack of counters actually makes fighting slightly less complex than in Infinity Blade.

Dragon Slayer does bring some of its own ideas to the party. Certain correctly timed dodges activate an on-screen rune. Trace it quickly enough and you’ll cast a stun spell that usually leaves the dragon incapacitated long enough to get in your full eight-shot combo, ending with a big final burst of damage. Still, you really only have one offensive move most of the time, and a little variety would have been welcome. 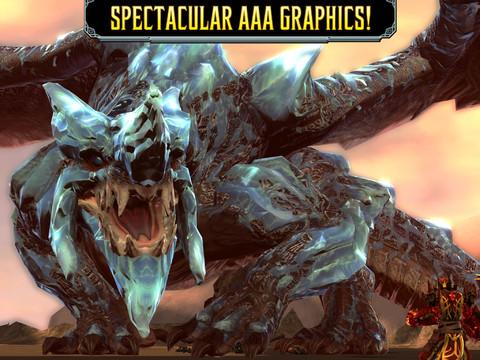 Besides learning the different attack patterns, a big chunk of the game’s challenge comes from the fact that you’ve got to beat every dragon in a stage without healing. There’s no penalty for death, but replaying a specific battle only gives you the health you had to start. This makes you concentrate a little more even during fights you know you’re going to win, though it also provides plenty of justification for simply bailing on a stage when you go into the boss battle with low health. Healing potions can help if you don’t mind their expense.

Like other similar titles, there are currency and experience rewards at the end of every successful battle, and lesser amounts even after losses. Your character’s gauntlets can be upgraded in the store, and since some dragons are weak against specific elemental attacks, there’s a good reason to have multiple sets. Armor, potions and pets are also there for the purchasing, but everything is so pricey that it feels like a none-too-subtle attempt to convince you to shell out for some premium currency.

Gaining offensive, defensive and magic boosts by leveling up can also take a while. You can go back and grind through previously completed levels, but that can get old fast. Fortunately, the number of new stages you can unlock is impressive, and this is a game you can play for a while if it tickles your fancy. 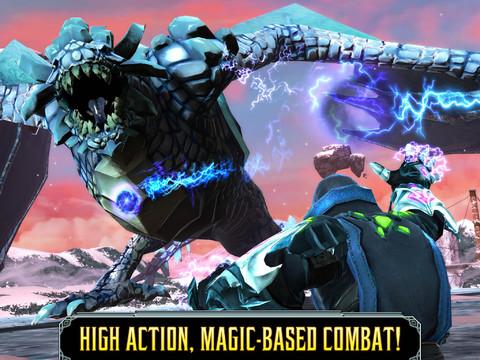 We probably won’t be able to keep saying that forever, as people will eventually get tired of games “inspired by” Infinity Blade. Glu Mobile no doubt already realizes that, having already mined this particular sub-genre with Death Dome and the Blood & Glory series. Dragon Slayer has its striking dragons and just enough creativity to ensure it won’t be the last stop on the gravy train, and that’s good enough for now.