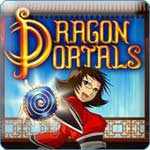 Rather than popping marbles, twisting hexagons, or swapping gems, Dragon Portals, a new match-three game from veteran casual game studio MythPeople, has players dropping colored orbs from the back of one flying dragon to another in an effort to match up three or more similarly-hued spheres. Apart from this one twist, and better-than-average art direction, it’s a fairly run-of-the-mill puzzler.

The plot concerns a woman with oriental ancestry who discovers an artifact that whisks her away to a magical realm that plays host to a species of slender, airborne dragons that are falling from the sky under the weight of an evil magic. She is descendent of a sentinel who looks after these creatures, and has been summoned with the hope that she will be able to pick up where he left off and save the peaceful dragons from crashing to the ground.

It’s difficult to take issue with Dragon Portals‘ presentation. The eight islands over which the dragons fly are lush and beautiful, almost like dynamic paintings. Indeed, in what turns out to be a striking example of art affecting play, the cumulous cloud barrier we pass through as the dragons descend momentarily obstructs our view of the reptiles, creating a brief spike in difficulty.

What’s more, the score, which changes from island to island, does a great job of setting mood. Most of the pieces have a traditional Oriental sound with modern rhythms and instruments layered on top. The resulting music is both relaxing and exciting, and transforms into an adrenaline laced tribal beat as our dragons near the ground.

It’s also difficult to find fault with the game’s basic design. Dropping orbs from one dragon to the next in an attempt to line up three or more like-colored balls amounts to little more than dressing up the same old match-three puzzle concept most casual gamers are familiar with in new clothing, but it still proves both pleasant and challenging.

It’s not perfect, though. The primary problem is a feeling of repetition, which begins early on and only gets worse as the game progresses. Players have the same objective—namely, clearing orbs quickly enough to open an escape portal for the dragons before they crash into the ground—puzzle after puzzle, for nearly 80 levels. It’s no cake-walk—even relaxed mode, which shaves down the difficulty several notches, doesn’t guarantee success—but a game needs more than a high degree of challenge to remain interesting.

To be fair, players earn lots of game-changing power-ups by making multiple matches in single moves and creating cascades of three or more matches. These power-ups range from butterflies that make orbs of a particular color disappear to meteor showers that smash several spheres off the dragons’ backs to a hammer that organizes the orbs into like-colored groups. There’s nothing wrong with these power-ups per se, they just aren’t very original; match-three veterans will almost certainly recognize all of them.

And while we can choose which three power-ups we want to use in any given level, the puzzles themselves never really change, which means there’s no strategy to power-up selection. I tried each new power-up once or twice upon earning it, but I tended to stick with the ones that I thought most effective for my playing style.

MythPeople also threw in an optional mini-game that pops up between some puzzles. We’re offered the opportunity to snap photographs of dragon faces for a mysterious organization, and each picture we shoot is awarded a rating of one to five stars based on how well we frame the shot. It’s a modestly entertaining distraction the first couple of times, but quickly grows stale. I began rejecting the organization’s offer whenever it appeared once it became clear that the game’s objective wasn’t evolving in any noticeable way.

Outside of the story there are a couple of unlockable bonus modes: Survival and Island. The former lets players pick the power-up of their choice and see how long they can keep the dragons aloft under circumstances of progressing difficulty. Between one and five stars are awarded each time you play, depending on your performance. The latter allows players to pick one of the game’s eight islands and have at it for as long as possible, again with ultimate goal of keeping the dragons airborne long enough to earn a five star rating. Basically, it’s just more of the same ball dropping action with a slightly different objective.

The final feature meant to keep players clicking on orbs is a series of trophies awarded for accomplishing random feats, such as pulling up the dragons from a nosedive mere seconds before they hit the ground and then continuing on to successfully finish the level. I received a small amount of satisfaction each time I saw one of these achievements pop up on my screen, but I never viewed the trophies as goals unto themselves.

And now I feel like I’m nitpicking. There really isn’t much wrong with Dragon Portals‘ core puzzle play; it’s just a bit monotonous. And, unfortunately, that monotony is somehow exacerbated by all of the failed attempts to spice things up.

If the dropping/matching mechanic happens to tickle your fancy—which it very well could, if match-three games are your bag—you’ll likely get your money’s worth from this game, which, all modes combined, lasts a good seven or eight hours.

If, however, things begin to feel repetitive during the demo, that sensation will only deepen as you progress further into the game.

For similar games, try The Book of Wanderer: The Story of Dragons, Fairy Island, and Rock Garden.