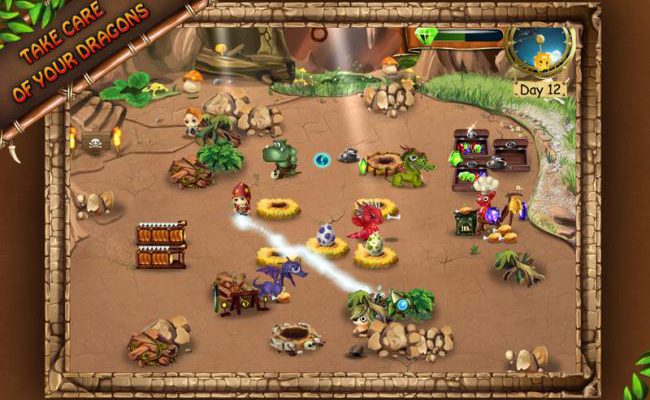 Care for dragons, collect jewels, uncover treasure and battle a wicked witch in this strategy-sim.

When it comes to pets, some people might opt for a couple goldfish in a tank, perhaps with an accompanying snail and plastic palm tree. Others, however, prefer their very own cave full of three species of jewel-laying dragons, imp construction workers and human-pummeling trolls. If the latter is more your bag, put your virtual pet ownership to use in the strategy-sim Dragon Keeper.

In Dragon Keeper, gameplay is similar Insane Aquarium: Manage various creatures, feeding them occasionally (thus leveling them up into adults who yield more valuable rewards), add helpers that provide various special skills, and ward off disruptive enemies. You’ll play four chapters, with each providing you different types of baby dragons to rear. You’ll have to feed the scaly buggers a nice hock of meat every so often, and in return, they’ll squirt out shiny, money-catching precious stones. And, plus, y’know, they won’t starve to death.

The goal is to complete a series of objectives—collect 15 of a certain color jewel, for example—in order to unlock magical artifacts that will combat a wicked witch. You’ll receive a different artifact in each chapter. For an extra challenge, the game sets a time limit to obtain the artifact and achieve “expert” status, usually 20 days.

In a single day, your dragons will grow, eat and produce jewels. At the end of each day, you’ll have the chance to sell different combinations of colored jewels for profit. But, like in real life, colorful, resplendent gems fetch a pretty penny, so you’ll have to deal with thieves infiltrating your cave trying to steal the goods. You can click on them at lightning-fast pace to dispatch the goons, or use some of your income to hire a troll bodyguard. You can also use the gold to buy extra dragons, goblins that will help collect your jewels, or a cook who’ll serve up dragon feed. Finally, imps help clear the land to make room for your burgeoning magical menagerie. 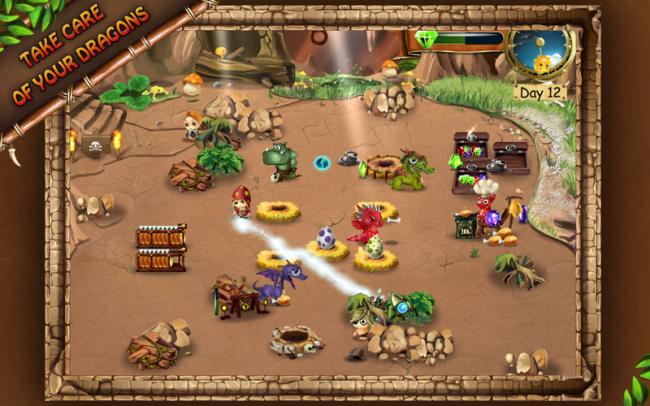 The graphics are cute and colorful, and the Greensleeves-inspired soundtrack is an appropriate, medieval-sounding backdrop. In-game instructions and tutorials are painless, and all the necessary information is weaved seamlessly into gameplay. Nothing feels intrusive or repetitive. It’s also not boring. Things move quickly, and if you’re not paying attention, your cave can get downright hectic. With a bevy of intruders to combat, a sea of jewels to collect, boulders and bushes to clear, and an army of famished dragons to nourish, tasks can add up lickety-split, if you’re not careful enough.

It would have been nice, however, to be able to play with ten more different species of dragons in any given chapter. (There are only three per chapter.) Additionally, the only real difference between dragons are cost, jewel value, and slight differences in appearance. A bit more effort in ensuring a variety in the critters would have been appreciated, but it’s not a big deal. More levels would have been nice, though. Honestly, gameplay is so brisk and enjoyable that the addiction factor is high, and you will likely get sucked in. But when the game is beaten in a couple of hours, some players will probably be left wanting more.

All in all, though, Dragon Keeper is a charming, fast-paced take on the breeding-strategy genre that balances accessibility with just the right level of complexity, even if the adventure ends a bit too soon.