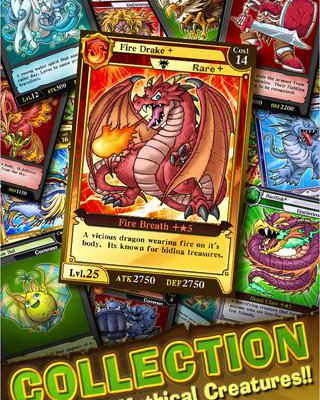 Cards, combat, and a healthy dose of smiles.

With an App Store awash with creature-collecting freemium games, CCGs, and creature-collecting CCGs, it can be tough to choose a favorite. I think it’s safe to say that, barring a few titles, the massive selection offers something for everyone. And with the recent release of Dragon Collection, even lovers of cute cartoon characters who shun evolution and prefer fewer dragons in their dragon-themed games are covered.

As with most free-to-play iOS monster mashes, Dragon Collection tasks players with becoming the next greatest Master of some sort. Probably a Dragon Master. Wait, yes, Dragon Master. This entails lots of questing (which uses energy), fighting other players (using a different sort of energy), and gathering monster cards through quests and the purchase of card packs. 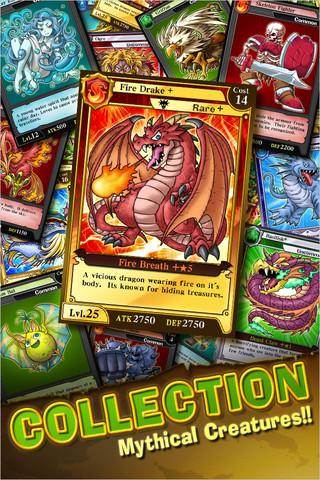 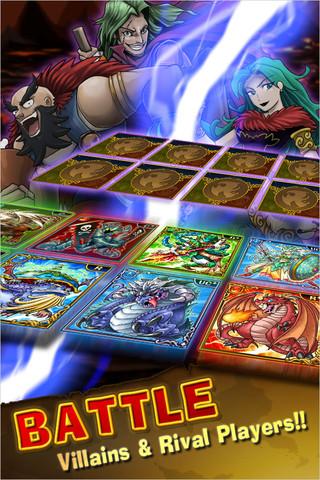 Player combat consists of putting together attack and defense decks, balancing their cards’ strengths and skills with their overall cost. Lumping a few powerful cards into a deck might be tempting, but it can also mean the difference between being able to attack multiple foes in quick succession and having to sit back and wait a half hour or more after one fight. Careful balance is key for anyone looking to stay competitive.

Dragon Collection features many concepts that have been done before in some form or another, but wraps them all up in a bright and colorful package with plenty of fantastic illustrations. Combat is still rather static, but has been dressed up a bit when compared to the competition thanks to some simple visual effects and sounds to indicate stat boosts and whatnot. The funky little card machines used for drawing new creatures and enhancing favorites are also fun to watch. However I think above all else, Dragon Collection deserves praise for being much more first-time user friendly than other similar titles. Getting started is easy, if a bit slow, and despite looking fairly busy, the interface is pretty easy to navigate through.

This general simplicity and ease of use comes at a cost, however. Anyone who’s already cut their teeth on some of the older, meatier iOS CCGs will probably find Dragon Collection to be a tad too nurturing. The complete and total lack of monster evolution is also a disappointment, although the option to enhance stronger creatures with weaker/useless ones is thankfully present. Of course these are all factors that only really make a difference to genre veterans. Newcomers or casual iOS CCG players will undoubtedly have fewer complaints about simplicity. However, both groups will probably find the constant and “just long enough to be really annoying” load times a bother. This lagginess carries over into the animations, too, with drawing/enhancing cards and even battles suffering from some pretty significant frame stuttering.

Truth be told, I’m a fairly big Rage of Bahamut fanboy. That’s no doubt made me more critical of Dragon Collection‘s “lack” of certain features and slightly more simplistic play. That’s not to say that I think this cute n’ cuddly CCG is a waste of time, however. In fact, far from it. It’s a near-perfect introduction for anyone interested in card-collection iOS games, as well as a great title for anyone interested in online CCGs looking for something a little less “intense” than the average offering. Aside from a few irritating framerate hiccups and load times, I’d say it’s a great fit.