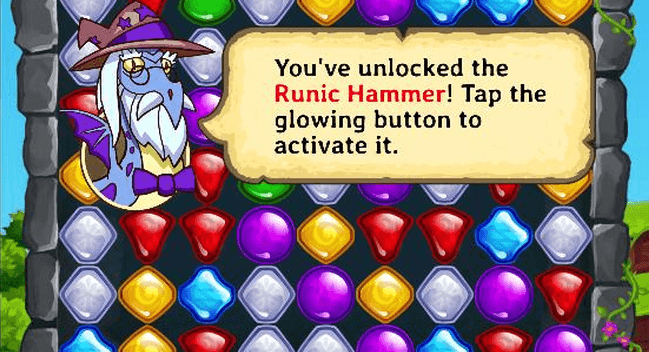 One too many cracked dragon eggs

Match-three game Dragon Academy sets itself up as a sort of Hogwarts for dragons: contending that via match-three (or as they call it, “hatch-three”) play, you can train up your own little fire-breather. Although you do indeed spend the majority of your time matching three or more colored icons, the dragon evolution that’s supposed to be the other gameplay headliner doesn’t really amount to much. Even worse, Dragon Academy plays host to a variety of fun-blocking bugs.

Dragon Academy starts with a fairly confusing comic-book-style intro full of disjointed images that are often cut off by the game’s display. The attempt at storytelling here, slight as it is, makes little sense. Fortunately, the game’s name tells you all you need to know; the point is to take your cute little starter lizard named Melty, and help him gain access to dragon school. There’s nothing particularly innovative about the gameplay here—in a nod to the game’s theme, Melty is your main power-up and you charge him by matching icons the same color as he. Once he’s charged, you can click him to sweep away whole rows of icons at once.

Like many social match-threes, you’re given five lives and can continue to play as long as you manage to meet each level’s objective. You might have to reach a certain score, make potions drop to the bottom, or remove obstacles called “goo.” As each level is cleared, you’ll see little Melty move around a map, his overreaching goal being to defeat the Wobblins (a collection of weird reptile/goblin creatures who, for some reason or another, enjoy harassing dragons). As you progress, your dragon evolves and gets bigger and…that’s it. There’s not much else that happens with it except that its power-up has broader effect. As you go, other dragons unlock, which makes for some variety since they come in different colors and boast different power-up abilities.

Dragon Academy is extremely easy at first, and this is in keeping with most social games’ strategies. The idea is to let you play longer at the start so you’ll get you hooked enough to pull your wallet out when things become more difficult. The easy stretch lasts longer than most in Dragon Academy, and it’s not until level thirty or so that things finally become more of a challenge. Boards start taking on more complex shapes and turns become more limited, thus forcing you to plan better and to time the use of your dragon power-ups more carefully. This is all to the good, as is Dragon Academy‘scute art style and sound (I especially like the way my little dragon cries when I fail a level).

What isn’t so great is that the game suffers from some bothersome technical issues. To begin with, sometimes the display cuts off part of the playing field and/or the score. Worse, the friends mechanics are—to use a technical term—jacked. There’s no friends bar at the bottom of the display and no menu. The only time you can access friends, boosters, leaderboards, and your dragon inventory is when you start a new level. More annoying than these though, by far, is the friend request system which seems to do nothing.

Upon reaching the end of an area, I took the non-purchase option to unlock the next by asking three friends for help. The game’s request list displayed nothing but my Facebook friends’ names with email icons across from them. When clicked, these gave no confirmation of where the invites were going or even if they were going. I’m thinking not, since my friends received no notifications in their email or Facebook inboxes or in the game’s inbox. I tried inviting another friend to play and although the invite appeared in her inbox, it was impossible for her to accept or clear it. The most egregious bug in the game however, is that its purchasing function appears to be unreliable. 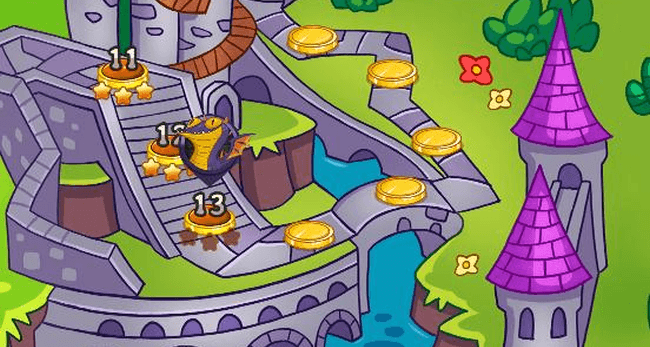 Being unable to obtain three friend responses to unlock the next area, I opted to pay $.99 to open it. I was charged the $.99 and had access to the game until I ran out of lives; when I went back to play the game later however, I was once again locked out of the new area and stuck behind the gate I paid to unlock. Let’s hope that that is a bug and not by design.

Although not particularly inventive, Dragon Academy could be a fun little time waster were it not so full of fun-busting issues. It looks and sounds good, and its micro-transaction prices are more reasonable than some other social games. As it is though, with the game exhibiting so many serious technical problems, it looks like now is perhaps not the right time to play it.