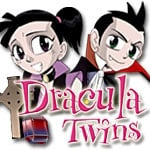 It’s that creepy and kooky, mysterious and spooky time of year. Halloween! The season to light a few candles, dust off the organ, whip up your favorite brew and sink your teeth into something tasty…like pumpkin pie or candy. Mmmmmm!

It’s also a good time to avoid garlic, crosses, holy water and pointy wooden objects. Especially if you’re a vampire, as is the case in Dracula Twins.

As fate would have it, the frightful vampire-hunter Doctor Lifelust has kidnapped Count Dracula and plans to use his blood to concoct an elixir of life. Of course, this just doesn’t fly with the Count’s kids, Drac and Dracana. Thus, their task, and yours, is to put the bite on the evil Doctor and his malicious minions while rescuing their point-toothed pop.

Dracula Twins is a spooky platform-based adventure spanning 40 stages filled with run-and-jump action. It’s not a side-scroller, however. Rather, it’s a grand 3D experience that winds its way through an unusually cheerful and colorful version of Transylvania — beautifully rendered and filled with monstrously-quirky sounds and hauntingly upbeat music.

Play is simple. Run, jump, attack enemies, avoid injury and death, repeat. Plus, a built-in tutorial system walks you through the game with instructions and hints provided as you go. Just don’t think all the hand-holding and simplicity of play equates to boring. That’s not the case. It takes a fair dose of puzzle-solving brainwork and precise timing to survive.

Following a comic-style intro, you choose your “on scream” persona, Drac or Dracana. Then, begin with some basic instruction on keyboard controls and the use of weapons. Action transpires, as mentioned, in a gorgeous, 3D-rendered world. As you whip enemies into submission and solve object-based puzzles, the landscape moves with you, rotating as you round bends and cross platforms. All the while, lightning flashes through the sky and bats flit overhead, accompanied by thunder, groans and other creepy sounds. It’s a great combination that helps bring Dracula Twins to life.

At the game’s inception, you’re given three lives, represented by portraits of your character. With each injury, these likenesses slowly turn into skulls, one at a time. When a skull is complete, you die and return to the start of the current stage. Fall into a spike trap, and it’s instant death. As with most platformers, you can’t save your progress; the game handles that at key stages. So, be extremely careful to avoid a premature demise. Loose all your lives, however, and the game’s over. When you restart, you’ll pick up from the last save point.

Several power-ups are offered that come in quite handy, a restorative life potion, in particular. Others include a longer, more powerful whip to break stone blocks and whomp enemies at greater distances, and a spell book to increase your fireball’s potency. Blood rubies, collected along the way, replenish your magic, used to cast fireball spells.

Puzzles encountered are mostly object-based, like throwing a switch to release a key or moving a crate to jump over an obstacle. Some, however, are more action heavy, involving precisely timing your way through a series of swinging axes or pounding hammers. The worse, though, are puzzles that require you to jump across platforms interspersed with spike-filled pits while avoid enemy attacks. They’re downright diabolical!

Speaking of enemies, they take the form of monsters like zombies, flying skulls and axe-wielding stiffs. Most attack up close and personal. However, a few will thwart your progress from a distance. For example, zombies throwing barrels. You’ll have to jump the casks or break them with your whip until you reach their source and stop the madness. Expect an appearance or two from Doctor Lifelust, as well. Just think of him as a boss monster.

As for things that go bump in the night, two nails get driven into Dracula Twins’coffin. First, the game’s striking 3D terrain occasionally rotates during a jump or right before a series of traps. This can be a bit confusing and detrimental to your progress. The more niggling issue is a degree of imprecision when jumping. All too often, I fell into a pit of spikes because little Drac didn’t jump when I hit the appropriate key. Instead, he slipped off the edge to get up close and personal with some jumbo sized toothpicks. Neither blemish is damning, but they’re still a pain in the neck.

Nevertheless, Dracula Twins is a hoot. A batty diversion, it will keep you busy while the kids rot their teeth on all the candy they scored. Better yet, maybe you can play it together (and snatch something yummy when they’re not looking). It’s a guaranteed treat you can “Count” on to spice up the holiday.