Dracula Series – Part 3: The Destruction of the Evil Review 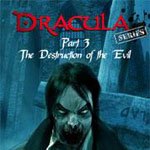 Dracula finally makes an appearance in the third and final chapter of Dracula Series.

If you’ve stuck around this long, this is the moment you’ve been waiting for: the first and final confrontation between Father Arno Moriani and Dracula himself. As the concluding chapter in the Dracula Series trilogy, The Destruction of Evil wraps up the storyline with the much anticipated appearance of Dracula, though the final sequence of the game is somewhat disappointing and the ultimate conclusion is a little confusing. Still, the third chapter is easily the best, so if you already played through the previous two games, The Destruction of Evil ends the trilogy on a relatively high note. Even if the ending isn’t all that satisfying.

The game begins, just like the previous one, with Father Moriani on a train, returning to the Transylvanian town of Vladoviste. Only this time around, he’s convinced that he must continue to follow the “path of the dragon,” and find Dracula once and for all. As his investigation continues, the Father will learn that several characters are not quite who they originally appeared to be. He’ll also have to undergo a series of trials, namely making his way through a winding maze, before finally reaching Dracula’s castle.

This final confrontation starts off scary enough–Dracula looks terrifying and his ability to magically disappear and reappear constantly will put you on edge–but, instead of an exciting final battle, it ends up being a war of words. Dracula will ask you a series of questions and you simply need to answer correctly to please him. The final few scenes up the excitement level somewhat, but overall the ending of the series isn’t very satisfying and somewhat confusing. It’s worth watching if you’ve already played through the rest of the series but, if not, you’re not missing much.

In addition to the interview with the vampire, you’ll also have to make your way through a maze and solve a number of other puzzles. But really, the gameplay remains unchanged from the previous games. It’s still the same blend of traditional point-and-click gameplay and casual sensibilities, that makes it very easy to get into but also eliminates virtually any challenge. Likewise, the voice acting and visuals are the same, aside from the addition of Dracula himself. The infamous vampire actually features a pretty unique design, and his look and way of speaking are unlike most of the draculas you’ve seen before. He’s dirty, angry, and looks like he’ll bite at any moment.

Chances are, if you’re reading this, you’ve already played through chapters one and two. If that’s the case, The Destruction of Evil is definitely worth a play, if only to finally get a look at Dracula. But if you’ve been on the fence about the series, the final chapter will do little to change your opinion for the better. It features the same simplified gameplay and the ending will likely disappoint. Unless you’re dieing to quench your thirst for a vampire themed adventure game, you may want to give the Dracula Series the stake.