Dracula Series – Part 2: The Myth of the Vampire Review 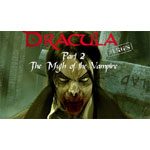 When we last left Father Arno Morianai, he was visiting a professor in Budapest who had some seemingly crazy ideas about just what was happening in the small Transylvanian town of Vladoviste. Namely, that it has something to with vampires. Dracula Series – Part 2: The Myth of the Vampire continues the story that began in the first game, and is essentially the middle portion of Dracula 3: Path of the Dragon. This gives the game somewhat of a strange feeling, as it doesn’t have a real solid beginning and end. If you play it right after Part 1 it makes sense, but it doesn’t stand up on its own.

The game takes place on the third day of the investigation, and begins with Father Morianai returning by train from his trip to Budapest. After telling Professor Kruger what he’s learned, the professor tries to get Morianai to go with him to Turkey for further investigation. But the Father isn’t convinced yet. Instead, he decides to finish up his report and maybe stay in town in relax for a little while. But then something strange happens. After dreaming of a young woman wearing a medallion for several nights in a row, Morianai wakes up to find that very medallion lying in his bed. So his investigation continues, though he doesn’t seem to be much closer to actually finding real answers. It’s certainly a more engaging story when compared to Part 1, but as the middle part of Path of the Dragon it feels somewhat awkward, as well.

The Myth of the Vampire plays identically to its predecessor, which shouldn’t be much of a surprise. It’s a point-and-click adventure that consists largely of investigating areas, talking to witnesses and other characters, and solving relatively simple puzzles. Again, this is a simplified version of Path of the Dragon, so none of the puzzles are particularly difficult. This helps make the game appeal to a new audience who aren’t adept at adventure games, but at the same time it removes virtually all the challenge from the experience. This isn’t a game where you’ll get stuck very often, if at all.

While the story itself isn’t very spine tingling, the game makes up for this somewhat with its presentation. Though the second chapter takes place mostly during the day, it still has plenty of unsettling moments. But though the visuals look great, what really sets the tone is the sound design. Both the sparse but haunting soundtrack and the various sound effects in the game create a very specific atmosphere that makes it feel as though there’s always something around the next corner.

It may not be all that exciting, but the second part of Dracula Series is certainly better than the first. Even though not a whole lot happens, it feels as though the series is actually moving forward to an interesting conclusion. The Myth of the Vampire plays the awkward role of being the middle portion of the saga, but at least creates the impression that things will end on an exciting note.