Home / Reviews / Dracula 3: The Path of the Dragon Review 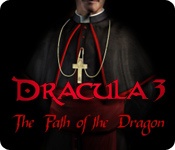 Dracula has risen again in Dracula 3: Path of the Dragon. This adventure game is the third title in the Dracula series, following Dracula: The Last Sanctuary and Dracula: Resurrection. This instalment follows Father Arno as he travels to Transylvanian to investigate a worthy sainthood, but instead he is thrust into the world of Dracula. Though Dracula 3 was released as CD-ROM game, it has been recently become available as a download.

Dracula 3: Path of the Dragon follows the mission of a Father Arno Moriani as the Vatican sends him to a small Transylvanian town to investigate the life of Dr. Martha Calugarul to determine if she is worthy of beatification and should be made a saint by the Church. While there Father Arno discovers that Dr. Calugarul may have been murdered because she was trying to stop a string of strange murders that left the victims drained of their blood. Are there really vampires in the 1920s? To find the proof he needs, Father Arno must walk the path of the dragon into the world of the occult and into the world of Dracula.

Dracula 3 is set up like traditional point and click adventure game where players are given an open area to click on people or objects to interact with. This game is divided into 6 days which have certain events you must complete before you can go onto the next day. In each day, you can explore the village and talk to characters to find clues or active events. You can also pick up or interact with objects, read documents, and solve puzzles within all the locations you explore. To make the game easier, your cursor will change its icon as you hover over different objects in your environment to indict what action you can take with them.

When speaking to characters in the game, you are given a choice of various subjects to discuss with them which can lead to other possible topics. You can choose to skip over topics but this can lead to missed clues and triggered events, so it’s better to exhaust all subject points. Don’t worry about writing information down from conversations or documents in the game, because they will be saved in your inventory for later reference.

The game has a unique hint system in the form of a bible which has you click on a random page in order to get a bible passage as a hint. The 30 puzzles in the game do take a bit of trial and error especially ones like the blood test which have you figuring out how to take blood and then test it. Without any references in the game, it’s not easy to complete without a cheat sheet.

While all puzzles were challenging and made you think, the storyline and puzzle options were terrible for the first two hours of game play. Father Arno spent more time on the phone with characters in the first two days of this game then he spent doing anything else. If a game doesn’t have a good gripping storyline or at least one puzzle in the first hour of gameplay, how do game developers expect to keep players interested in their games?

The locations in the game though small for exploring were quite detailed and varied. As Father Arno follows the Path of the Dragon, he travels from the small Transylvanian village to the ruins of ancient Romanian castle, Vlad Tepe’s prison cell in Turkey, Budapest, and the depths of Dracula’s Lair, all of which are brought to life with realistic 3D graphics and intense music. The music score was excellent in the game as each environment had its own mysterious or spooky soundtrack to enhance the atmosphere. Even the sound effects were spot on for each item in the game and really added to the time period believability.

The biggest disappointment though had to be the fact that this was a game about vampires and yet the game barely had a single vampire in the story. Even Dracula doesn’t show up until the very end of the game and his name is in the title.

Dracula 3 has a "teen" rating but really the only violence you find in the game happens in the end when Father Arno must defeat Dracula, and even then there’s no real blood or gore like you would find "hardcore" games. The game does have a creepy atmosphere at times which may scare the little ones, so following the age guidelines here is a good idea.

Overall, Dracula 3: Path of the Dragon could have been a better game had it not been for the slow start to the story and puzzle solving. The dialog and music was excellent and really added to the realism of the game. I never came across any bugs or problems with the game design. The puzzles were challenging enough and varied in difficulty.  All in all though, the storyline was too slow for my liking.

If you liked this game, try Dracula Origin, Syberia, and Post Mortem.