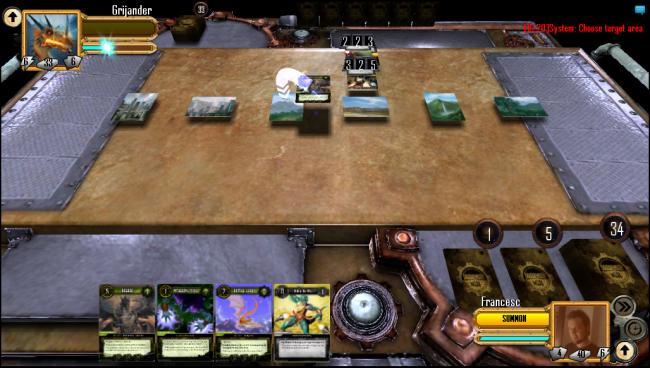 This game might be a Draconian master, but it’s also a lot of fun

When the collectible card game format originally exploded onto the hobby scene, there was a quick burst of incredible creativity resulting in some diverse and enthralling designs. There’s been little innovation in the genre in recent years, but the genre has now moved to computers, with the potential for new directions to explore.

Draconian Wars is one such new pretender. In the game your deck is everything: each turn you skim off cards face-down to spend on summoning cards from your hand, and any left either go back on the bottom of your deck or your hand. It’s also your life total. Damage causes you to permanently discard, and when you’re out of cards, you lose.

Discards are caused by combat units in play. If unopposed, units you’ve deployed across one of the six areas force discards equal to their “extract” value. If opposed you can start a combat. This is a fiddly affair but essentially units have an attack value which is totalled on each side. Attack totals are compared, the highest wins and the loser has to absorb the difference either by killing units or discarding cards.

There’s more to the game than this. A lot more. There’s equipment and weapons, instant cards, random factors that can enter combat, unit movement, differences between air and ground areas and units. The game is complex, but there’s a tutorial that will help ease you into the flow. But what’s most impressive isn’t the extra rules, but the extra interest they add.

Draconian Wars is a deck-building game. You start with a standard deck from one of two factions, and as you progress through AI matchups you win more. Then you can start to fine tune your deck using only the cards you want, looking for combinations and synergies.

Every time I won a match and came away with a fat collection of new swag to add to my arsenal, I thought I had a better grasp on how the strategies of the game worked. I thought I’d built a better deck. Each time it was demonstrated to me that I was wrong.

This isn’t down to the AI, which isn’t particularly tough and in many scenarios needs added support from existing units on the board to challenge the player. It’s because of the way all the different factors in the game interlace, making some sort of grand strategy a deliciously slippery thing to pin down.

Combat nets you the biggest damage, so you might stack up your units for maximum impact. But your opponent will just slip away, and extract instead to gradually wind you down. Focus on that and you risk enemy units moving into big stacks and squashing your widely distributed forces. The mechanics through the whole game are fiendishly balanced to ensure that no one strategy or power is uppermost, and forces players to think on their feet as well as build their deck cleverly in advance.

You and your foe will dance this intricate and absorbing dance on a rather lovely stage, beautifully designed, smoothly animated and furnished with a variety of evocative art it’s a cut above a lot of other digitized card games. But the translation does have some usability issues. There’s a few too many clicks to get things done, sometimes, and the odd point at which a needed option is triggered by an obscure icon rather than a clearly labelled button. 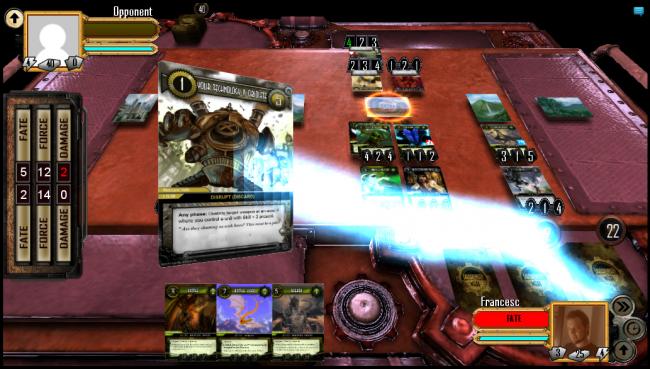 But the worst thing is simply the speed of play. Anyone familiar with collectible card games will appreciate that as you become acquainted with the rules and powers of the various cards, your play speeds up. But Draconian Wars counts down a timer between each play for the opponent to respond. When playing a human opponent live over the network, that’s unavoidable. But it’s enforced against AI play too and it can make the game drag. Especially when, as is not unusual, a game is in the bag but you have to play it through to the end to win.

There are other minor gripes. There’s only a limited number of AI decks to play against, although this is compensated for somewhat by a challenge mode. But they are minor. This is a clever and very inventive piece of design which stands tall and proud amongst the gray sea of wannabe Magic: the Gathering clones. Anyone interested in this style of game should try it.