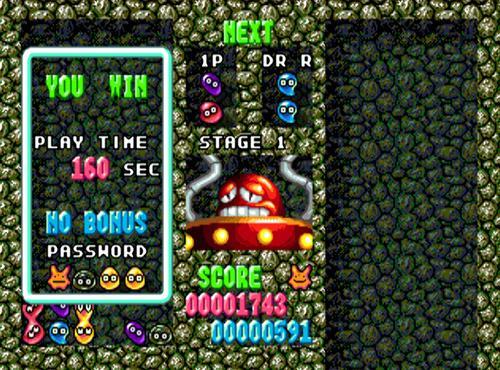 For a world famous doctor with an army of gigantic evil robots, Dr. Robotnik sure is cranky. That’s why in Dr. Robotnik’s Mean Bean Machine, the villain best known as Sonic the Hedgehog’s arch-nemesis decides to kidnap a whole bunch of beans to turn them into evil little robots. Or something like that. Really, the goofy story is just an excuse for some addictive puzzle action. But while the main puzzle mechanic is fun, the difficulty level gets incredibly high very early on and the game also suffers from a frustratingly archaic password save system.

The main game takes place across 13 different stages, as you take on all of Robotnik’s robot minions before facing the evil doctor himself. The goal is to free all of the tiny bean people and you do this by matching up four or more of the same color. The beans fall down from the top of the screen in pairs of two and you can rotate them around however you like. The pairs are attached, however, which can make for some tricky situations.

What makes the game unique, though, is that you’re not the only one playing. The screen is divided in two, and while one side displays your own puzzle, the other represents your computer controlled robot opponent. You both get the exact same beans dropped onto your puzzle, but how you go about using them is up to you. When you eliminate larger groups of beans, this will cause junk beans–ones that can’t be cleared unless groups of four are matched around them–to fall on your opponents screen, and vice versa. What this means is that the faster and more efficient you are with your bean removal, the more difficult it is for your opponent. The stage is done when one person’s beans pass the top of the screen, causing them to lose. 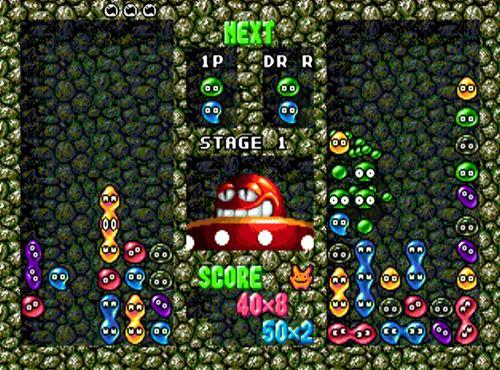 As you progress through the gang of robot goons, your opponents will become more skilled and the beans will fall faster and faster. And it doesn’t take long before things get really challenging. Some of the later stages feel nigh impossible, and will cause more than a little frustration in most players. Thankfully the game is fairly forgiving in one respect: you have unlimited continues, so you can keep trying to beat a stage as long as you like. As a game released nearly 20 years ago, Dr. Robotnik’s Mean Bean Machine naturally has a few elements that make it feel like an older game. And while most of these are forgivable, the ancient save system isn’t. After each stage you’ll be given a password, which you’ll then have to write down and re-input the next time you play. It’s cumbersome and annoying and completely unnecessary in this day and age.

The actual puzzle aspect of Dr. Robotnik’s Mean Bean Machine is timeless, and is as addictive today as it was back in 1993. But the high level of difficulty and ancient password save system make it less accessible than it otherwise should be. But if you’re up for a challenge and don’t mind keeping a pen and paper handy, Dr. Robotnik’s Mean Bean Machine will keep you matching beans for a long time to come.