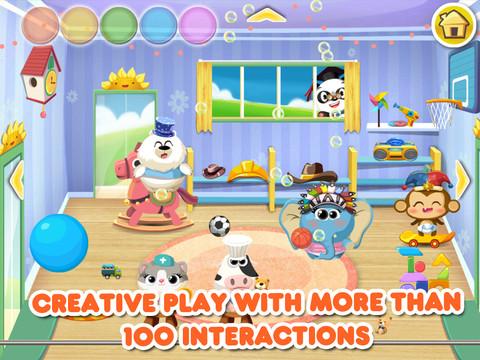 Caring for toddlers doesn’t have to be Panda-monium

Dr. Panda is rapidly becoming a fixture on the iDevices of parents everywhere, with developer TribePlay expanding the franchise that started in a hospital out to a school and a restaurant. Rapidly establishing an in-house art and play style, the friendly bear is now in your local nursery with Dr. Panda’s Daycare.

Ignoring the irony of leaving real toddlers in charge of virtual ones, the app gives you a series of rooms in which to care for and entertain a collection of super-cute animal babies while their parents go to work. The nursery has a playroom and garden for amusement, a bedroom and kitchen for essential needs and, rather unexpectedly, a concert hall. Each room is filled with toys to play with, clothes to dress in, activities to undertake, switches to press and doors to open. There’s no goal, no endpoint–just you and a hundred ways to interact with your precious charges.

In fact, a hundred ways might be an underestimate. Put a hat on your toddler, and they’ll beam with joy. Give them toys to hold for a repeat performance. Put your dressed, amused baby on a rocking horse and they’ll rock, on a slide and they’ll slide, in front of a keyboard and they’ll make sweet music. Activities are fixed in place, but there’s nothing to stop you from taking items from one room to another, so you can have cereal-toting kids in the bedroom and youngsters dressed for bed in the paddling pool.

Getting everyone around the house is achieved with a drag and drop mechanism, but it’s not quite as intuitive as it should be, especially given the young age of the target audience. As you move through rooms, the children left behind appear in bubbles at the top of the screen from where you can drag them into a new room. Awkward to figure out, easy to master. Getting them to wear and play with stuff is a bit more challenging. The proximity detection seems a little flaky, with a very fine line required between dragging a toy to a baby and having them grasp it, and having it fall to the floor.

However, the biggest issue with Dr. Panda’s Daycare is not slightly frustrating controls but a lack of complexity. Everything is one-dimensional. The kids in the nursery sit where you put them, and do whatever you give them to do, and that’s your lot. There are several places to put them and a lot of things for them to do, but without some sense of stepwise progression it becomes dull quite quickly after the rooms in the house have all been investigated.

I get that it’s a sandbox for children to explore. But most children’s apps either have some micro-steps towards a small goal inside the sandbox, such as the process of preparing meals for the guests in Dr. Panda’s Restaurant, or allow a great deal of creative freedom, as in Toca Tailor. But Dr. Panda’s Daycare manages neither, and while fun at first, it rapidly drains of interest. 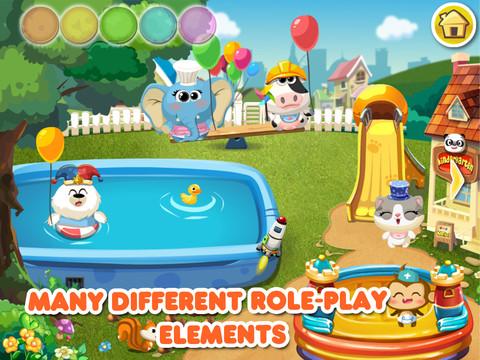 The Dr. Panda’s art style, which is now becoming characteristic and very appealing, isn’t enough to save the game, in spite of the addition of the absolutely delightful offspring of the animal characters seen in the other apps. The sound is pleasing too, and has been integrated well with other aspects of play. The music, for example, can be changed by touching the CD player in one of the rooms to a birthday tune or a soothing lullaby, aiding imaginative play. And the kids can apparently play the instruments in the concert room, different seats making different parts of the tune–a clear nod to Toca Band with inferior results.

I feel a bit bad giving this a slightly negative review because it’s clear the team behind it worked very hard to come up with all sorts of ways for the toddlers in your front room to play and interact with the toddlers in the nursery. And theoretically an open-ended game where children are free to explore and do as they please is exactly what an inquiring young mind needs to learn and enjoy at the same time. But somewhere, somehow, in working out and implementing all the different things that could go in the nursery and the ways they might fit together, some of the fun got left behind.