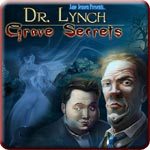 The latest tale to spring from the mind of acclaimed game designer Jane Jensen, Dr. Lynch: Grave Secrets is a classic whodunit mystery in the tradition of Sherlock Holmes or Hercule Poirot. The star in this case is England’s leading skeptic, Dr. Ignatius Lynch, who reads a newspaper article that tells of a ghostly woman witnessed haunting an archaeological dig site in a quaint country down. Intrigued, Dr. Lynch sets out with his assistant, Overly, to investigate in hopes of debunking the mystery.

You’ll have 25 minutes to complete each investigation, which involves searching multiple self-contained scenes for "clues." As is typical for mystery-themed hidden object games, some of the clues will be random items (like a shovel, coil of rope or bunch of grapes) while others will be key "clue" items that lead Lynch to an interesting new development in the case.

At the end of each investigation you’ll hear from a new witness who will give Dr. Lynch valuable information in the form of a Clue Card. These Clue Cards, along with the key items you’ve found so far, can be reviewed at any time. Each investigation concludes with a bonus round that will be a mini-game puzzle of some sort – these are entertaining for the most part, but can be skipped if gamers find them too frustrating.

There’s not much to complain about with Dr. Lynch: Grave Secrets. Production values are wonderful, items make sense in the context of the scene, and the mystery story contains enough twists and turns to keep you interested throughout the game’s 14 investigations and 28 locations. If you start a new game you’ll be given new lists of items to find (except for the key items, of course, which are always in the same place), so there’s some replay value.

The game introduces some new twists as well: some clues are actually animated, like the one that asks you for "fireflies in a jar" – some of the flies are actually crawling around and you have to catch them. There’s also a novel hint system that grants you new hints for completing optional hidden object challenges, such as finding six artifacts and placing them on a shelf, or finding ingredients to add to a bowl to complete a recipe.

The one niggle with the game is that certain items are tiny and perhaps a little too difficult to find. Hints are fairly plentiful, though, and if you run out of time you’ll just have to start at the beginning of the investigation with new items.

This is more of a nitpick, but I also didn`t care for the annoying (and stressful!) chime that kicks in every five seconds once you`ve reached the final two minutes on the clock.