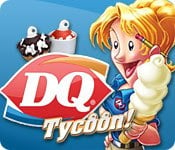 Emily’s favorite place to spend a hot summer day is the local Dairy Queen (DQ), so when she sees a Help Wanted sign in the window it seems like a match made in heaven. The little store on the edge of town hasn’t been profitable in years, but hopefully Emily can turn things around. In DQ Tycoon you’ll try your hand at managing a chain of stores selling various tasty treats.

Although there are some strategy elements to DQ Tycoon, the game is basically a straightforward DQ-branded time management game. Emily stands behind the ice cream shop counter serving tasty soft serve cones, Blizzards, Peanut Buster Parfaits, banana splits and other treats to a steady stream of customers.

When a customer arrives, Emily clicks on them to take their order, then, much like a DQ server in real life, walks over to the correct machine and presses a button while the treat gets made. Later in the game there are two- and three-step orders, like assembling banana splits and dipped cones.

In between levels you can shop for upgrades like faster machines, play a cake-decorating mini-game to restock the fridge, and read about fun DQ trivia like the fact that the first store opened up in 1940.

Each chapter in the game is divided up into a seven-day work week, and the last day of the week involves working the treat prep counter making cones and sundaes by matching the correct ingredients. The goal is to earn as much money as possible each day, which goes towards an overall weekly total. If total earnings reach or exceed the minimum amount, you’ll get to advance to the next week. If not, you’ll have to go back and replay certain days to try to improve your performance.

What makes a DQ Tycoon a little different from other time management games is that although a new store location is added each week, you’re still responsible for running the previous stores as well. You can decide which store to work at each day, and whichever stores you’re not working you’ll have to assign employees to work for you.  You can also hire assistants to work in the same store as you and automatically fill customers’ orders. Their wages are deducted from the day’s profits.

DQ Tycoon is a cute idea. Anyone who’s a fan of the store’s treats will enjoy serving Dilly bars, Blizzards and other familiar treats, and the game has a fairly good sense of humor with touches like "brain freeze" moments, a crisis tha thapens when a customer eats a treat too fast and you must take them a hot hamburger to bring their temperature back down to normal.

However, neither the time management nor the strategy portions of the game are pulled off terribly well. The biggest source of frustration is the employee assistants, who are not only slow moving but pretty dumb as well. Employees move significantly slower than Emily does, which means it’s usually faster to just do everything yourself. And even if Emily is in the middle of processing an order herself, employees will still try to fill the same order, meaning they frequently get stuck holding empty cups and useless treats – which means a slow-moving trip to the garbage bin to get rid of them and start over.

The developers of DQ Tycoon could learn a thing or two from the way PlayFirst’s Dairy Dash uses multiple characters in a seamless way that actually made the game more fun instead of less so. Not only that, but employees left in charge of other stores always seem to underachieve, which means you can get used to having to replay certain days because your total is never good enough in spite of how well you may have done working your own stores. During one particularly bad day, my employee made me a grand total of $10 when the day’s goal was $153.

The game offers the ability to chain commands in advance, which is nice, but instead of simply right-clicking the mouse to cancel commands (which most other games use), you actually have to move the mouse to click on a button elsewhere on the screen, which interrupts the flow. Another complaint is that there’s no way to restore customers’ patience hearts other than using a randomly-appearing power-up that shows up perhaps once per level.

Finally, there seem to be glitches in the game where every so often all of the machines become un-clickable. The only way to get out of the situation is by shutting down the game and starting it up again.

DQ Tycoon has the occasional decent moment where everything comes together, but it has too many problems and annoyances to be able to wholeheartedly recommend.