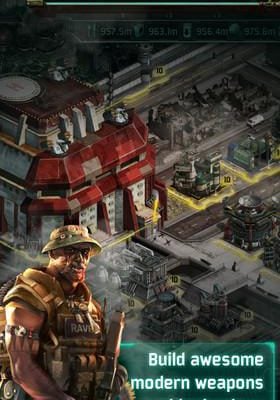 Downfall is a workable game for mobile strategy enthusiasts, but it proves the apocalypse can be a little dull.

At this point it seems like the differences among the host of city-building strategy games on the App Store come down to mere aesthetics. Do you like your strategy with castles, knights, and rote fantasy trappings? Pick up your sword and frolic in the Kingdoms of Camelot. Prefer your strategy narrated by steampunk women clad in leather and brass? Then by all means, go play Arcane Empires. And you folks in the back–do you like your strategy to unfold in a post-apocalyptic universe where gas-masked thugs lord over the ruins of Western civilization? Then Downfall: Clash of Factions might be for you.

It’s a decent game for what it is, minus some issues with its convoluted menus and loading times that verge on the annoying – but even in its best moments, it’s nothing we haven’t seen before.

Unless you’re new to this genre, you probably know the drill. Like so many other strategy games, Downfall: Clash of Factions leads you through the minutiae of building up resource camps and production facilities with the help of a kindly-but-grizzled sidekick. In this case, it’s a chap who’s remarkably well-mannered despite the chaos around him, and considering that he tells you how to do everything in the tutorial, it’s surprising that he doesn’t usurp the reins of the city for himself. During the actual building phase, you juggle the views for your city and its surrounding countryside, building up each to fend off the warring states who seek to invade you. Like other games, Downfall: Clash of Factions give you several days before you can be attacked by other players, although you can hack right through that safety net by initiating an attack yourself. Here as elsewhere, that’s rarely a wise decision unless you’ve pumped a fortune’s worth of premium transactions into your fledgling city, and if you take that route, you should probably seek some professional help.

Fortunately, some people in this shattered world are smart enough to realize that humanity works best when it sticks together. That’s where the factions and their clashing leap onto the stage, which allow players to pool their resources and gang up on players who didn’t have the sense to join a faction before they stepped away from their PVP safety zone. Cynicism aside, it’s also a good way to enjoy PvP on a faction-to-faction basis, although battle itself merely amounts to watching see-sawing meters. (Aside: I’d love to see Kevin Costner’s Postman character try to get *this* bunch of folks to kiss and make up.) A steady global chat stream also enlivens the experience; too many mobile strategy games neglect it, leaving their players with the depressing sense of playing in a vacuum. 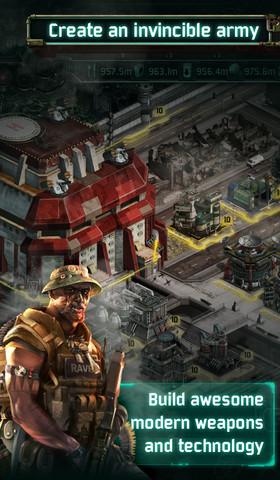 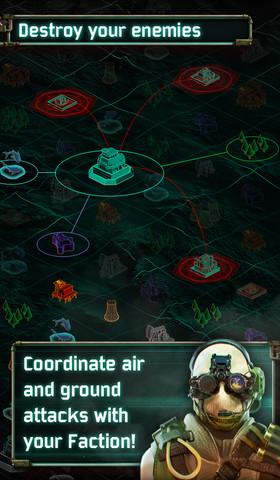 As in most of these games, the crucial differences come down to little quibbles over the presentation. Downfall is a certainly a good-looking game, complete with building aesthetics that complement the gloomy futuristic setting, and the user interface does a good job of capturing some mildly sci-fi end-of-the-world ambiance. It’s all done so well, in fact, that it might have more than a little to do with the game’s somewhat nagging load times. Performing most actions through the menus usually results in a brief wait of three or more seconds while the loading wheel turns, and while that may not seem like a long time, it has a way of bogging down the gameplay if you’re in the groove.

Not that getting into the groove is necessarily easy; Downfall is also one of those strategy games that takes a long time to get going. It delivers free coins as though it really were hoarding them in some alternate reality where resources go only to the worthy, and the process of building new buildings usually takes a few more steps that necessary thanks to the cumbersome menus. Stranger quibbles await, such as how the game insists on making you play it on the iPhone with a vertical format, leaving you to spend a little too much time sweeping over the map to see the whole of your city. Mobile strategy games generally aren’t known for massive amounts of action, but some, at least, manage to make the experience fun. In light of the concerns above, the true downfall of Downfall: Clash of Factions is that even though all its separate parts work decently enough, the few bad decisions render the whole experience a little dull.