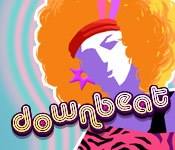 For many, the 80’s was a golden era, a decade when pop was king, action movie stars could blow up a car with a single bullet and women wore shoulder pads so huge that NFL quarterbacks would gaze enviously at them before getting squished by William ‘The Fridge’ Perry’s supersized gut.

Harking back to the era of Madonna and Jackson’s heydays, Downbeat resurrects several classic tracks from the 80’s and places them into a colorful and entertaining game that’ll test your rhythmical skills to their max and have you grinning with joyous nostalgia for countless fun-filled hours.

Here’s the (musical) score. You play an 80’s DJ tasked with keeping a club’s dance floor throbbing with bopping bodies by keeping time to a collection of legendary 80’s hits. Each dance floor is divided into three or four colored sections (green, purple, yellow and blue) each with its own contingent of dancers.

When the track kicks in, a series of colored balls drop from the top of the screen indicating certain rhythms that you must tap out with your mouse buttons as they enter your rhythm circle at the bottom of the screen. Nail the beat and match the ball to a correspondingly colored zone and you’re awarded points and extra dancers. The more dancers you have strutting their stuff, the more Groove you’ll have. However, miss too many beats and your Groove counter will drop to zero, at which point, it’s song over.

There are also numerous bonuses for you to collect. Every so often an object like a guitar or a pair of shades will fall in place of a ball. Collect three matching objects and you’ll have a set, which you can then cash in for an extra injection of points.

Downbeat features two game modes for you to tap along to – City and Freeplay – both of which play in much the same way, though the former restricts your song choices depending on which city you’ve opted for (London, New York, Miami or LA), while the latter doesn’t have the dance floor visual variety of its more structured counterpart.

The selection of songs is adequate if hardly impressive. However, there are more than enough genuine hits to make up for the slightly miserly number of tunes, including Material Girl, Our House, Walkin’ On Sunshine, She Drives Me Crazy and Straight Up. One serious disappointment however is that you don’t get to keep time with the original versions, but are instead forced to listen to rather cheap sounding synth renditions that would be more at home in an elevator than a pop-themed videogame. What’s more, there are no multiplayer options, an omission that somewhat restricts Downbeat’s longevity.

If you’re the rhythmical type and your appetite for 80’s music is as rapacious as The Fridge’s appetite for fast food, you’ll find that Downbeat is the ideal game for you, one that melds instant accessibility with a genuine challenge. So pull on those padded jackets, step into the spandex and get ready to enjoy some nostalgic finger tapping thrills.