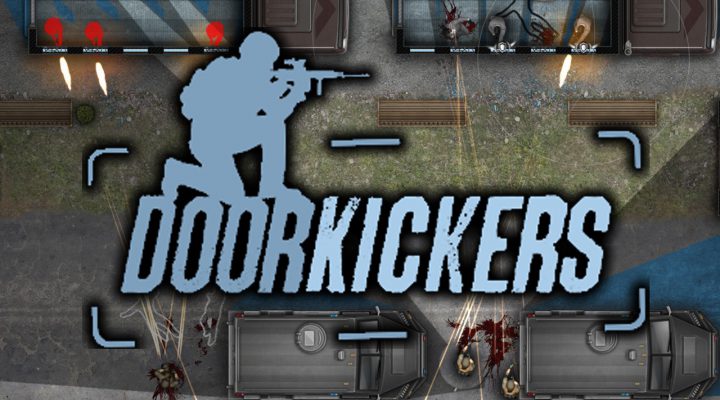 An interesting blend of puzzle and action.

Very difficult. Must teach yourself from a few tips provided in the glossary.

I was sold on Door Kickers as soon as I saw the announcement trailer. I was a big fan of the Rainbow Six games back in the Xbox 360 days, and Door Kickers looked to be a top-down version of that sort of experience. While I missed the game’s PC debut, I jumped at the chance to play it on my iPad.

One of the first things I realized about Door Kickers was that it was a lot harder than it looked.

In the trailer (see below), we see SWAT teams plowing through buildings like well-oiled machinery. It’s slick, it’s professional, and most strikingly it’s just plain awesome to watch. On the other hand, there were my runs. If someone were watching my SWAT teams proceed, it could all be synchronized with Benny Hill music.

For instance, I’d queue up some (what I thought was solid) assault strategies, send in my team, only to watch them get mowed down one-by-one by a thug with a machine gun in a hallway. Or, another common occurrence was that I’d believe I was planning a flash-bang invasion, but it turns out I was in the real-time game mode and the trooper would just chuck the grenade at the closed door.

Plainly put, I died a lot while learning how to play. Clearly I had my work cut out for me.

Door Kickers has a campaign, but it’s only accessible after spending some time with your squad in the Single-Missions mode. Which, as I found out, is a good thing.

There is no tutorial in Door Kickers, but there is a how-to-play glossary that can be accessed at any time from the pause menu. I found the Single-Missions to be perfect bite-sized experiences in which to practice the game’s mechanics and refine my tactics. 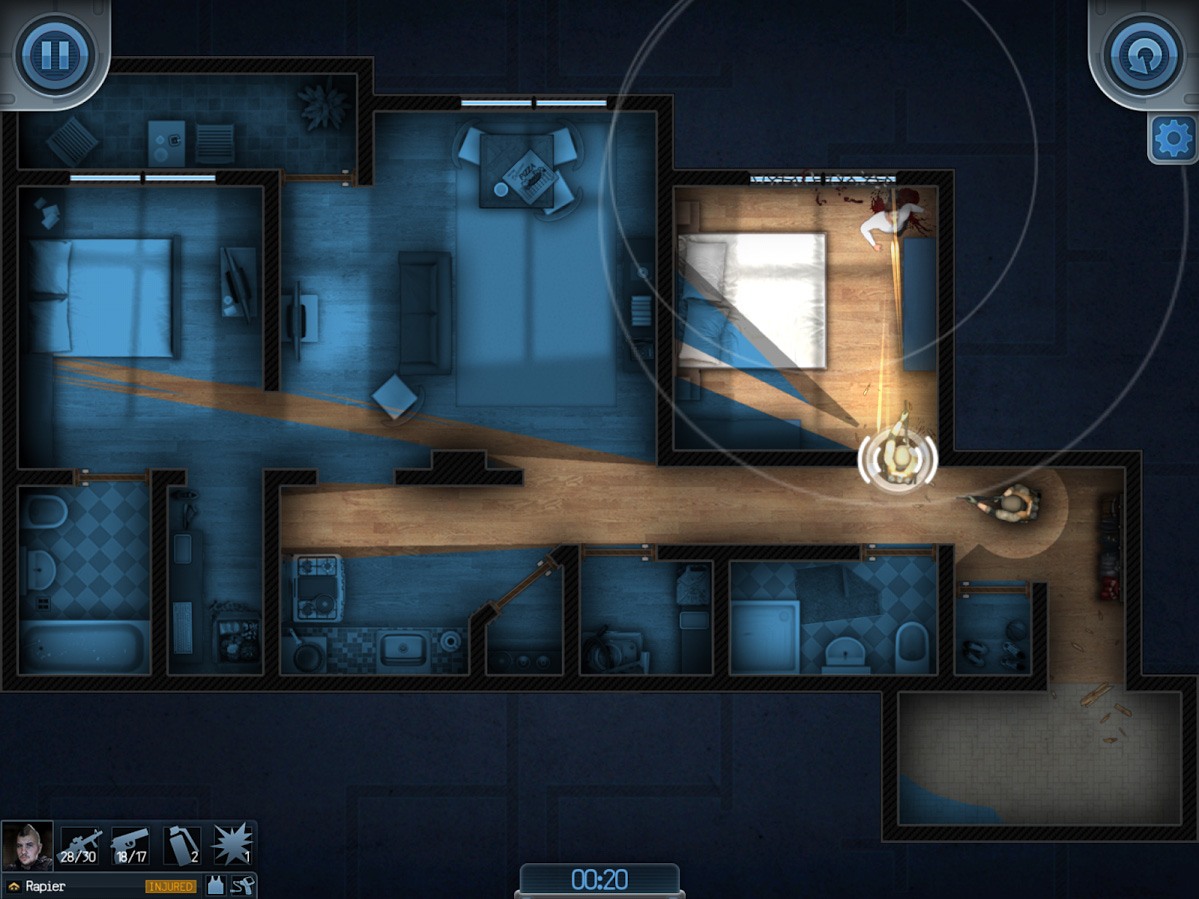 However, for a game as complicated as Door Kickers, I wouldn’t have minded a playable tutorial instead of a figure-it-out-as-you-go experience. This isn’t exactly Angry Birds…there are mechanics in Door Kickers that I haven’t seen on my iPad before.

Which brings up my next point: Door Kickers is refreshing. Sure, there are guns and shooting people, so yeah…thematically, Door Kickers isn’t anything new. But, I’m talking about the mechanics. It’s refreshing to get a game on my iPad that isn’t IAP-bait, or a matching game, or simply a shooter.

In fact, even though there are guns involved, I wouldn’t even really consider Door Kickers a shooter to begin with. The game is honestly more of a puzzle game. It’s just that in Door Kickers, when the puzzle pieces fit together there just happens to be shooting involved. 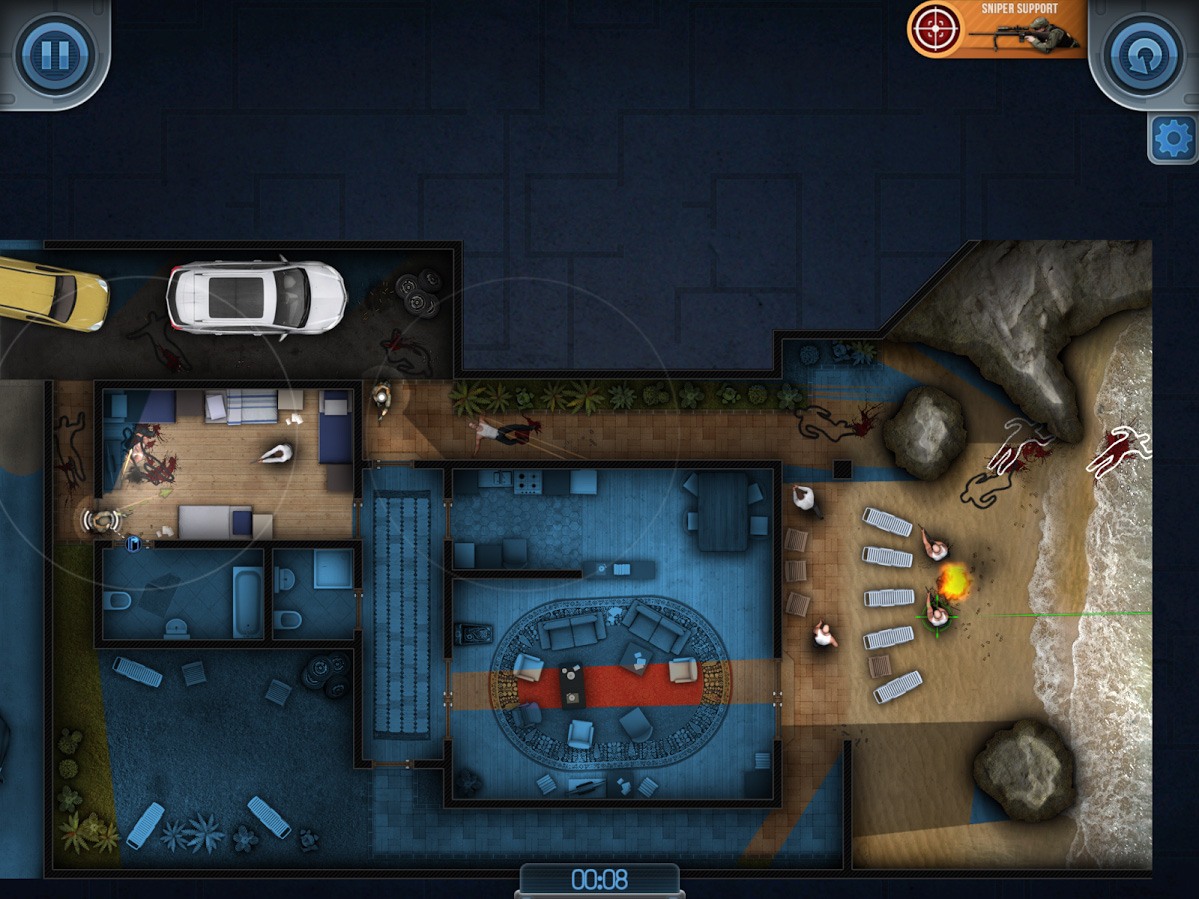 Each attempt at a level is different. Weighing what you can initially assess of the bad guy’s positions, you must take advantage of your SWAT unit’s strengths; whether those strengths involve flanking with a pronged assault, use of flash bangs, or a number of other tactical options at your disposal. Door Kickers even lets players tweak their individual squad units, for even more control.

The one downside to the game is that it demanded my complete attention. This isn’t the sort of game I would want to boot up while casually watching Netflix or during a few moments of downtime at work. There are so many factors to take into consideration with each run that you’ll need to be 100% focused on the game in order to properly succeed. Mind you, this isn’t really a downside — it’s more of a “don’t come in expecting typical mobile tropes” warning.

Give Door Kickers some time and understand that it isn’t anything close to a shooter, nor will you be doing anything like what you see in the trailer for awhile. Practice makes perfect, and the road to perfection in Door Kickers is a very long one …but it’s one worth travelling.