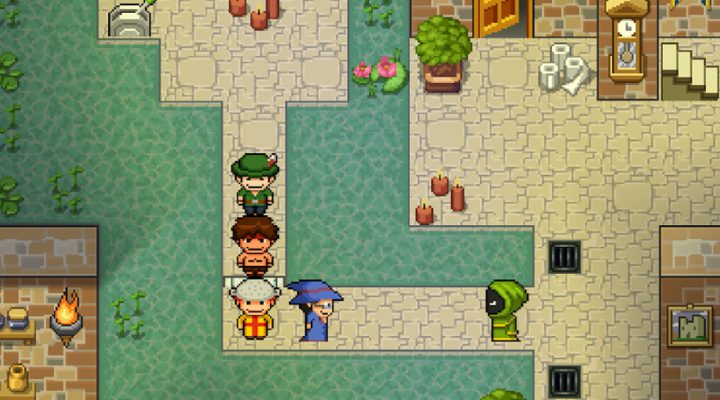 Number of spelling errors take away from the experience.

Humor was uninspired, tacky at times.

In our review of the original Doom & Destiny in 2013, we really liked the game for its humor, mechanics, and level design. I missed out on Doom & Destiny the first time around, but luckily (sort of), the enhanced Doom & Destiny brings in new content while allowing first-timers like me to get their hands on the franchise without a need for past experience. As it turns out, I found issues with the game’s humor, control mechanics, and the fact that some of the levels just didn’t look very finished.

Hooray for a difference of opinions?

Doom & Destiny Advanced follows a group of friends as they try and figure out what the heck is going on after they were seemingly thrown into a Dungeons and Dragons game. The group of friends move together in a line, Snake-style,  and are controlled by the player gesturing their movement with a thumb-stick. While the movement controls are pretty simple to get use to, what threw me for a loop was that when it comes to actual menus, and combat, those gesture-based controls remain.

The game ignores the best part of playing an RPG on a tablet: touchscreen controls.

While some may enjoy the humor in Doom &Destiny Advanced, I found it completely forced, and all around cringeworthy. The game tries so hard to reference as many things as possible. I think there were Star Wars, Star Trek, and Harry Potter references all within the first five minutes — and shortly after that I was fighting a monster made of poop and a skeleton who was lamenting over his missing wiener.

I love funny games, and I even enjoy a tasteful bit of immature humor here and there (Tales from the Borderlands is a great example), but too much of it is a bad thing, and that’s just what Doom & Destiny Advanced’s humor felt like: overkill.

On top of the weird controls and tasteless humor, the dialogue was often clunky or incorrectly phrased. I am not going to pretend to be the best writer or writer in the world, but if I get tripped up over wording more than a few times and spot spelling errors with regularity? That shows me the developers didn’t bother consulting with a professional wordsmith or editor before releasing their product. And in a story-based game, there’s really no excuse for that.

Beneath the grime is a zany RPG that I really wanted to like, but I ultimately found Doom & Destiny Advanced just wasn’t worth wading through the sludge to endure for long.

Cube Jump Review: The Square Root of the Problem