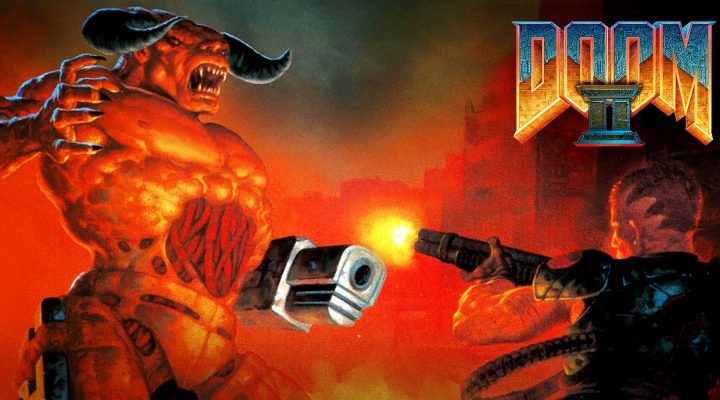 Doom 2 is about as classic as first person shooters can get. It took what made the original 1993 PC title great – meaty weapons, a startling variety of enemies, and simple yet intoxicating level design – and upped it to eleven.

It introduced the super shotgun, truly despicable enemies such as the Arch Vile, and levels that to this day still amaze with their ingenuity – and often, their cruelty. Tricks and Traps or Barrels of Fun anyone?

If you’re reading this you almost certainly know all of the above though. What you really need to know is . whether this mobile port is worth your time. The answer is…complicated.

There’s no doubt this isn’t a lazy port, with the game running full screen and boasting a smooth frame rate throughout. The inclusion of local four player co-operative and deathmatch modes is also very welcome.

You can also save anywhere at anytime via a healthy six save slots, so if you want to cautiously creep through stages you can. You’ll need to adopt that strategy if you’re to make a dent in the twenty Master Levels that are included as well – which conveniently brings us onto the game’s main problem.

The controls. Now it’s no surprise to hear that it’s hard to control a first person shooter without a controller or a keyboard & mouse. Ever since Back Track on the Game Boy Advance the genre has never felt at home on the smaller screen, and Doom 2 Mobile sadly does not buck that trend.

In terms of specifics the left side of the screen controls movement, the right side aiming. Double tapping on the left allows you to run, doing the same on the right fires whatever weapon you’re holding.

As Doom 2 has never required you to aim perfectly – you can’t move your gun sight up and down for instance – this isn’t a terrible system, and initially you’ll cope fine.

Sadly when it comes to tricker stages – that require fast thought and even faster action – this set-up falls well . short. Some of the Master Level stages seem almost impossible on the higher difficulty settings in fact.

Double tapping to shoot is fine in practice, but in reality many of the rapid fire weapons – in particular the plasma rifle – are incredibly tricky to use properly. When one of the most satisfying pieces of arsenal in the game is rendered useless that’s a big problem.

Tapping the centre of the screen to open doors also results in a lot of accidental misfires, and if you’re using a weapon that uses rare ammunition this can be hugely frustrating.

There are some other minor issues, such as not being able to play any of the levels from the main game whenever you want. This seems a slightly unfair decision considering both the game’s high price-point and the fact that most people will just be dipping in and out of the game for a hit of sweet nostalgia.

Ultimately then, Doom 2 is not the perfect mobile port of id Software’s superlative shooter – but you have to ask if such a thing is even possible. Considering the circumstances, this is a perfectly acceptable port – just don’t go expecting it to be an entirely smooth ride.